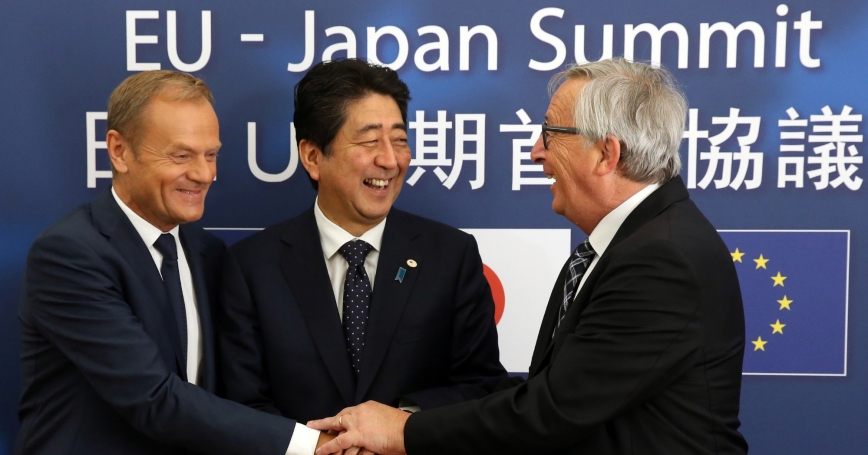 The United States increasingly finds itself on the sidelines of the world's economic arena. Consider some recent steps taken by one of its closest allies, which has the world's third-largest economy: Japan.

Last month Japan finalized a free-trade agreement (FTA) with the European Union (EU) that will encompass some 600 million people and roughly 30 percent of gross world product. It creates what the Financial Times calls “the world's largest open economic zone.” When Washington withdrew from negotiations over the Trans-Pacific Partnership (TPP) at the beginning of last year, the 11 remaining countries that had been participating in deliberations pressed forward, with Tokyo taking the lead. They agreed on the core elements of a revised deal this past November — the so-called Comprehensive and Progressive Trans-Pacific Partnership (CPTPP) — and are hoping to ratify it early this year. Japan is simultaneously contending with China to shape the contours of the Regional Comprehensive Economic Partnership, an FTA that covers approximately half of the world's population and a third of its output and, notably, excludes the United States. Most recently, Tokyo has agreed to help finance Beijing's ambitious Belt and Road Initiative.

It is important to note that this flurry of Japanese activity has longstanding antecedents. The acceleration of Asia-Pacific economic integration acquired significant momentum in the late 1990s in particular, when a major currency shock exposed the region's overreliance on U.S. stimulus as well as the weakness of its crisis management infrastructure. Paulson Institute Vice Chairman Evan Feigenbaum notes that the Asia-Pacific responded in part by deploying several initiatives that “excluded the United States: Asia-only currency swaps such as Chiang Mai (PDF), Asia-only trade and investment pacts, regional bond funds, and so on.”

But the trend toward economic multilateralism and regionalism is accelerating, and not only within the Asia-Pacific. The Economist estimated in late 2015 that the number of regional trade agreements had roughly quadrupled from 70 in 1990 to over 270. There are several explanations for this phenomenon, two of which have been widely noted. First, with global supply chains becoming more complex, multinational companies are increasingly reluctant to navigate a different set of market-entry standards for every country; they would rather deal with uniform codes that apply across large blocs of economic activity. A second, more recent factor is the growth of “digital trade” that transcends physical boundaries. The Financial Times ventures that by 2025, cross-border internet flows “could be worth more than the current global trade in goods, or some $20 trillion.”

That the world is tending toward greater regionalism does not mean that the United States should abandon bilateral trade agreements (BTAs). It has benefited significantly from the 20 such deals it currently has in force, including with prosperous allies such as Australia and South Korea. But the Trump administration would be remiss to focus principally, if not exclusively, on BTAs. Singaporean Prime Minister Lee Hsien Loong explained during a recent visit to Washington that because “you are bigger than any other partner that comes along … many partners will [not] be keen to deal with you bilaterally.”

A successful conclusion of CPTPP would offer Canada and Mexico a compelling opportunity to look to Asia.

Just as investors work to diversify their portfolio of stocks, countries aim to cultivate an array of military, economic, and diplomatic partners. While traditional U.S. allies want to boost their economic ties with the United States, they are neither counting on nor waiting for the Trump administration to recalibrate its penchant for bilateralism. The EU, for example, is no longer optimistic about the prospects for a Transatlantic Trade and Investment Partnership with the United States. Instead, it is pushing ahead on an FTA with Latin America's largest trade bloc, Mercosur. And with negotiations over updating the North Atlantic Free Trade Agreement (NAFTA) grinding into their sixth round, a growing number of U.S. trade specialists fear that Canada and Mexico—the largest market for America's exports and America's third-largest trading partner, respectively—may work more assiduously to lessen their dependence on the United States. A successful conclusion of CPTPP would offer them a compelling opportunity to look to Asia.

Eschewing multilateral agreements harms U.S. interests in other ways. Its companies end up paying higher tariffs than their competitors abroad to enter dynamic markets, and its negotiators have less power to shape the norms, standards, and arrangements that increasingly define global commerce. Politico reports, for example, that the TPP 11 eliminates “a provision that would have expanded access for U.S. express delivery services like UPS and FedEx”; “several additional intellectual property protections that would have benefited U.S. software, music, and publishing companies”; and “measures promoting wildlife conservation and labor rights” that, while far from perfect, “were clearly stronger than nothing.”

The era of bilateral economic diplomacy is hardly over. Indeed, the United States would advance its interests significantly if it could conclude bilateral investment treaties with Asia's two giants, China and India. But as the Trump administration considers strategies for improving the country's economic competitiveness, it would do well to revisit its current posture toward multilateral and regional currents.

This commentary originally appeared on The Diplomat on January 5, 2018. Commentary gives RAND researchers a platform to convey insights based on their professional expertise and often on their peer-reviewed research and analysis.