Where Is Assad Getting His Fighters from? (It's Not Just Lebanon and Iraq) 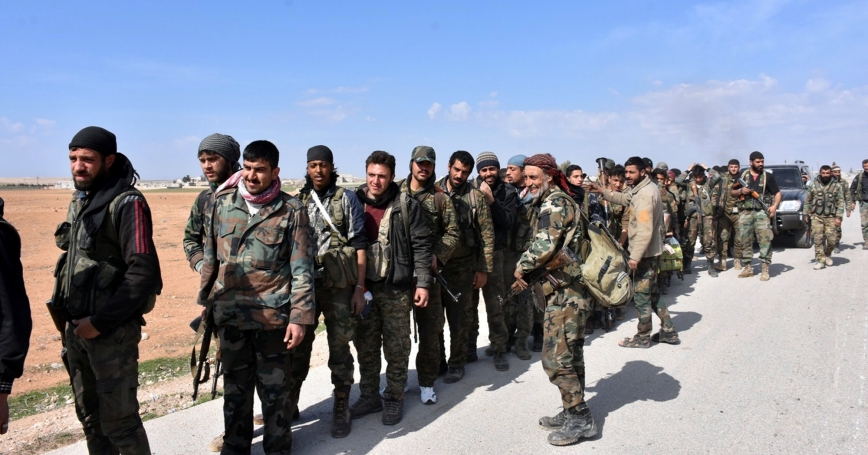 Forces loyal to Syria's President Bashar al-Assad stand in the al-Khafsa area on the western bank of the Euphrates River, Syria, March 9, 2017

Photo handout by SANA via Reuters

In early December, senior Trump administration officials suggested that approximately 80 percent of Syrian leader Bashar al-Assad's defense against insurgents in the country's ongoing civil war is being provided by forces imported from outside of the country. The lion's share of these fighters is being trained and equipped by Iran, the Assad regime's most ardent supporter.

Interestingly, however, these foreign fighters, almost of all which are Shia Muslims, are not merely comprised of Lebanese and Iraqis, but include significant numbers of militants from South Asia—mainly Afghanistan and Pakistan—which adds an entirely new dimension to Syria's ongoing civil war, now entering its seventh year.

As the civil war in Syria drags on, the Assad regime has been plagued by casualties and desertions. Many of its fighters have been killed or injured on the battlefield and to make up for these manpower shortages, the regime has looked to Iran to help recruit new fighters. Iran has been able to leverage the sectarian nature of the conflict in Syria to help rally Afghans living in Iran as refugees, of which there are approximately three million.

The Afghan fighters belong to a division known as Liwa Fatemiyoun, which is under the command and control of Iran's Islamic Revolutionary Guards Corps (IRGC) and according to official Iranian sources, numbers between 10,000 to 12,000 fighters. Many of these militants have experienced major combat action in Syria in Aleppo, Deraa, Damascus, Latakia and the Qalamoun region. Some reports indicate that hundreds have already died fighting in Syria.

Some fighters are purely mercenaries motivated by money, and some are enticed by promises of legal residency status and residency permits for their families back in Iran. Others are induced by the honorific “defenders of the shrine,” believing it is a religious duty to protect holy Shia shrines in Syria, including the shrine of Sayyida Zainab, revered by Shia Muslims as it supposedly contains the grave of the Prophet Muhammad's granddaughter. In many cases, recruitment standards appear to be quite low. Criminals and other undesirables are oftentimes among the regime forces, considered the equivalent of cannon fodder by Assad, where they are dispatched to the frontlines in Syria....

Colin P. Clarke is a political scientist at RAND Corporation and an associate fellow at the International Centre for Counter-Terrorism (ICCT)-The Hague. Phillip Smyth is an adjunct fellow at the Washington Institute for Near East Policy who focuses on Shia militia groups.

This commentary originally appeared on The National Interest on January 2, 2018. Commentary gives RAND researchers a platform to convey insights based on their professional expertise and often on their peer-reviewed research and analysis.