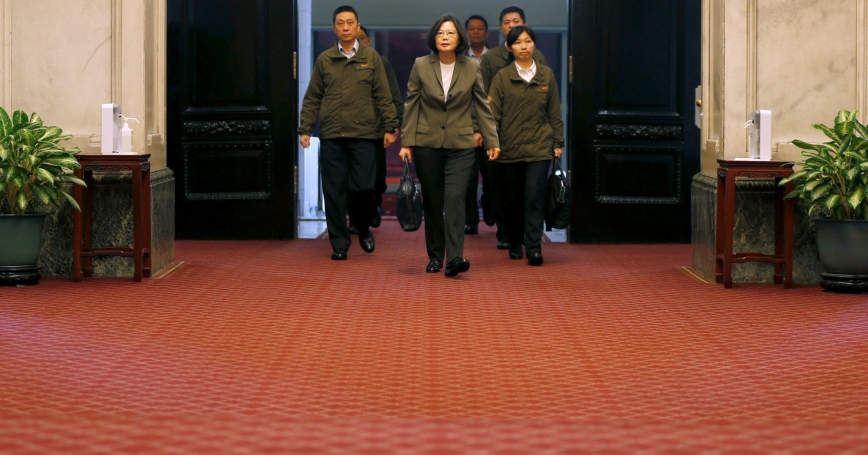 Upon the second anniversary of the election of Taiwan President Tsai Ing-wen, it is worth taking stock of whether the People's Republic of China's (PRC) initial fears of Tsai's political intentions have panned out. As I observed at roughly the one-year mark, Chinese leaders have ample reason to feel good about Taiwan, namely because Tsai had been focusing her energy on stabilizing cross-Strait relations based on the status quo rather than moving toward independence. This trend has only continued, undermining Beijing's rationale for ratcheting up pressure against the island nation. China, however, has ramped up its coercive efforts, prompting questions about Beijing's intentions and the long-term stability of cross-Strait relations. Beijing should recognize that Tsai is indeed a moderate, and China will be hard-pressed to find a more reliable and stable Taiwanese leader in the future. And yet, Beijing is harming relations with Taiwan under Tsai through its actions.

Over the past year, Tsai has proactively endeavored to negotiate a practical workaround to her endorsement of the so-called “1992 Consensus”, a concept that acknowledges the existence of only “one China,” but allows each side to interpret what that means. Tsai has recognized “the historical fact” of the consensus, though not the agreement's exact wording, in order to preserve Taiwan's de facto sovereignty. Tsai's decision has fueled Chinese suspicions of her. In the late 1990s, Tsai assisted then-President Lee Teng-hui in crafting the “special state-to-state” formulation for cross-Strait ties. When Tsai was running for the presidency in 2012, she explicitly rejected the “1992 Consensus”.

Nevertheless, the first two years of Tsai's presidency have demonstrated that she prioritizes caution, pragmatism and, most importantly, transparency, in dealing with China. Most notably, Tsai has reached out in a show of “goodwill” to engage Beijing on establishing a new model of cross-Strait relations. In a speech in August, Tsai said that “we hope that both sides of the Taiwan Strait can work on a new model for cross-Strait interactions that benefit the stability and prosperity of both sides and the region as a whole.” Tsai's remark was immediately panned in Beijing, with China's Taiwan Affairs Office accusing the Tsai administration of attempting to “de-Sinicize,” or eliminate Chinese influence over, Taiwan. One mainland scholar added that the “1992 Consensus” already exists so “why bother to find a new model if the existing one works fine?”

Prior to China's 19th Party Congress in early October, Tsai reiterated her administration's desire to engage Beijing on cross-Strait stability. However, Chinese President Xi Jinping refused to give an inch during his marathon speech at the congress, forcefully stating that “we have firm will, full confidence and sufficient capability to defeat any form of Taiwan independence secession plot.” According to Taiwan expert Richard C. Bush, Xi's language was the toughest observed yet of any Chinese leader when dealing with the independence-leaning Democratic Progressive Party (DPP) in Taiwan. This impasse may have hurt Tsai politically. Polling analysis from October 2017 indicates the percentage of Taiwanese who believe she is performing well on China policy dropped from about 50 percent in 2016 to about 35 percent in 2017. Tsai's falling approval rating on cross-Strait relations may be seen as a positive development for Beijing since past polls have consistently shown that most Taiwanese do not seek conflict with China.

In addition, Tsai's dealings with the United States have been exceptionally measured. Following the historic phone call between Tsai and the President-elect Donald Trump in December 2016, she sought to play down the significance of the unprecedented moment. Tsai informed visiting US journalists that the call was “not a policy shift of the United States.” She was also quick to deploy her spokesman to reiterate Taipei's strong interest in maintaining positive and stable cross-Strait ties when it became apparent a week later that Trump might seek to renegotiate Washington's “One-China” policy. In an interview last April, Tsai said she would be open to a second call with now-President Trump but hedged, saying “it depends on the needs of the situation and the US government's consideration of regional affairs.” She suggested such a call might only be necessary if cross-Strait tensions escalated significantly. Either way, Trump responded that he would want to speak with Xi before having any further contact with Tsai, a statement that should further ease Beijing's concerns.

Regarding the defense of Taiwan, Tsai has not deviated from past practices. She continues to advocate raising defense spending above 3 percent of gross domestic product to better fund the island's defense programs—a priority under her predecessor President Ma Ying-jeou, who hailed from the more PRC-friendly Kuomintang party. Tsai's administration continues to actively invest in domestic defense industrial programs such as the indigenous defensive submarine to reduce Taiwan's dependence on the US for arms. Nevertheless, Tsai would probably be happy to accept US arms that might be useful to the island's defense. For example, she has publicly highlighted the need to acquire a fighter aircraft capable of vertical or short takeoff and landing, such as the F-35. (Ma sought the F-16 C/D upgrade). Despite the similarities Tsai shares with Ma, Beijing trusts Tsai far less because of her past and her decision not to recognize the so-called “1992 Consensus”.

For Chinese leaders, words appear to speak louder than actions. Without Tsai's full-throated endorsement of the “1992 Consensus”, the two sides cannot seem to move beyond their cold peace. Beijing has embarked on a multi-pronged pressure campaign to discredit Tsai's administration. The news media has extensively covered China's theft of Taipei's diplomatic partners, including The Gambia, Panama, and others. The media has given less attention to the PRC's recently self-imposed ban on its citizens from visiting Taiwan's remaining allies, such as the Vatican and Palau, in an apparent attempt to convince these countries to abandon their diplomatic recognition of the island. Meanwhile, official cross-Strait communication mechanisms remain frozen, and although trade agreements signed under Ma remain in effect, no new agreements have been made.

In the military sphere, China's People's Liberation Army Air Force (PLAAF) has circumnavigated the island in 2016 and 2017 with its bombers in an unprecedented amount of air activity. In another first, the PLAAF explicitly signaled to Taiwan in December 2017 that the purpose of the flights was coercion. PLAAF bomber and other flights have become so commonplace that they appear to have overwhelmed the Taiwanese Ministry of National Defense, which declared in late December that it would no longer publicize PLAAF flights. China has also recently sent its only aircraft carrier, the Liaoning, through the Taiwan Strait.

China's short-term strategy has accomplished its main task—namely to weaken Tsai and hamper Taiwan's autonomy or any formal independence movements. Over the longer-term, this same strategy could increasingly become a liability for Beijing. Recent Chinese attempts at coercion—for example Beijing's decision to close off civilian northern air route M503 in the Taiwan Strait and its move to publicly shame companies recognizing Taiwan as a country—will likely only harden Taiwanese resolve to resist. Beijing's heightened military drills may create a more antagonistic environment as well that, if sustained, could bring a true independence advocate to the fore of Taiwan's leadership.

Ostensibly to shore up her sagging poll numbers, Tsai replaced Premier Lin Chuan with William Lai in September. Lai is from the southern city of Tainan, a DPP-stronghold that is considered very pro-independence. When asked about his recent statement in the legislature that seemed to endorse Taiwanese independence, Tsai noted that Lai was fully aware of “what the limits are” of government policy. In so doing, Tsai once again reliably demonstrated that she values the status quo. But this could slip beyond her control in the years to come if Lai remains popular—he is widely regarded as a potential presidential contender—and Chinese pressure convinces Taiwan that a more radical approach to cross-Strait relations is required. Lai's matter of fact manner on Taiwan's legal status might resonate with the approximately 70 percent of people age 20 to 29—and roughly 60 percent of the population overall—who view themselves as “Taiwanese” rather than “Chinese.”

On the economic front, Chinese attempts to punish Taiwan have already prompted Tsai to implement her New Southbound Policy, designed to diversify the island's economic and trade relationships beyond dependence on China. New Southbound has already yielded tangible results, with Taiwan and the Philippines recently inking an updated bilateral investment deal. India has also expressed strong receptivity and others may follow. The policy is already changing the face of Taiwan. According to one estimate, the percentage of Southeast Asian students attending school in Taiwan has increased nearly 10 percent from the previous academic year. And Tsai has highlighted the fact that 600,000 blue-collar immigrant workers along with about 500,000 spouses mainly from Southeast Asia now reside in Taiwan. Thus, China's fears of “de-Sinicization” leading to an eventual drifting away of Taiwan from Beijing's orbit is a real possibility. Further forced estrangement over the “1992 Consensus” will likely spur this trend and create more problems in the cross-Strait relationship.

In late December 2017, a senior Chinese official serving as liaison to the Taiwan Affairs Office confidently stated that Beijing maintains an “overwhelming advantage” against Taiwan for years to come. The official, Liu Junchuan, predicted that “the economic, political, social, cultural and military conditions for achieving the complete reunification [sic] of the motherland will become even more ample.” He also argued that “the basic situation of the Taiwan Strait continuing to develop in a direction beneficial to us will not change, and time and momentum are on our side.” Chinese confidence should not get out ahead of itself. Because of its pressure tactics, Beijing may inadvertently push Taiwan in a more extreme direction. Tsai is probably the best Taiwanese leader China can hope for right now. Despite her reputation in Beijing, she is actually quite pragmatic.

The main point: Chinese leaders have ample reason to feel good about Taiwan, namely because Tsai had been focusing her energy on stabilizing cross-Strait relations based on the status quo rather than moving toward independence. Beijing should recognize that Tsai is indeed a moderate, and yet, Beijing is harming relations with Taiwan under Tsai through its actions. Because of its pressure tactics, Beijing may inadvertently push Taiwan in a more extreme direction.

This commentary originally appeared on Global Taiwan Brief on January 24, 2018. Commentary gives RAND researchers a platform to convey insights based on their professional expertise and often on their peer-reviewed research and analysis.