A Norm in Crisis: Implications of Persistent Chemical Weapons Use 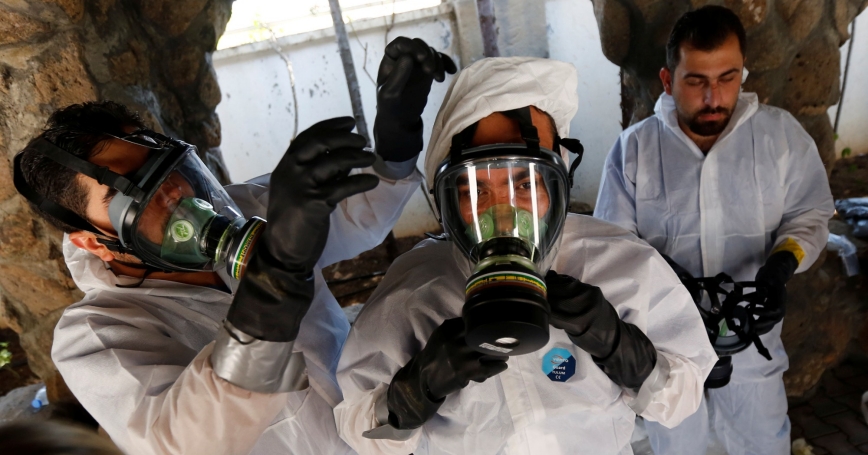 The recent chlorine attack in Douma, Syria, which reportedly killed over 40 men, women, and children, prompted a predictable reaction from the international community. Governments around the world issued statements condemning the attack. The UN Security Council held an emergency meeting in response. Russia dismissed reports of the attack as false and traded insults with the United States. Doctors scrambled inside Syria to treat those afflicted, while aid workers searched homes to locate more victims.

As horrific as this attack was for the people of Syria, its global implications also require attention and action. This is no longer an aberration, it is the latest in a pattern of attacks by not only Syria, but North Korea, Russia, and ISIS. These actors have demonstrated they are willing to flout international conventions by using weapons that many have worked for decades to contain. And yet, there are no real actions underway to hold perpetrators of chemical weapons attacks accountable.

Experts have been suggesting for years that the Chemical Weapons Convention (CWC), which has nearly 200 signatory nations, including Syria and Russia, may be in crisis. The current uptick in the use of chemical weapons raises the question, are they becoming a tacitly accepted weapon of war?

Are chemical weapons becoming a tacitly accepted weapon of war?

The 2013 sarin attack in Ghouta prompted an unprecedented diplomatic effort to rid Syria of its declared chemical weapons. This effort was initially hailed as a success, then Syria began using chlorine as a weapon of war in 2014 and launched another sarin attack in 2017. In that timeframe, ISIS also conducted chlorine and mustard gas attacks in Iraq and Syria. North Korean leader Kim Jong Un's brother was assassinated in Malaysia with the nerve agent VX. And last month, a former Russian operative, his daughter, and several other bystanders were poisoned with a novel nerve agent in the UK. Russia is believed to be behind the attack, though Moscow has denied any involvement.

The international community has not been willing to impose a cost that has been strong enough to prevent or deter further chemical weapons use. A new organization called the International Partnership against Impunity for the Use of Chemical Weapons tracks sanctions that the United States, the European Union, and other U.S. allies have placed on those accused of using chemical weapons since 2012. The list includes sanctions the United States has imposed on members of the Syrian regime.

In response to Russia's recent alleged chemical weapons use in the UK, the United States expelled Russian diplomats and closed a Russian consulate in Seattle. More than two dozen other countries also expelled Russian diplomats from their posts. These responses send important symbolic messages to perpetrators that there are consequences for their actions, but they apparently have not been severe enough to deter continued chemical weapons use.

Current efforts have shown themselves to be insufficient to avoid a worsening crisis, but more forceful options to stop the regime of Syrian President Bashar al-Assad (or Russia or North Korea) may not be palatable either. Short of UN action, which is continually hampered by Russian denials of Syrian involvement in these attacks, the United States and like-minded allies could form a coalition to pursue military options. Without using force, these same allies and others could continue sanctions. Allies could be more proactive about countering Russian narratives that these attacks are perpetrated by Syrian government opposition, or that they are false reports. Sharing information with the public that would disprove Russia's claims could help the international community make a clearer case for action. Providing detection equipment and aiding in forensic investigations could also help bring the truth to light.

There have been many events over the years that flipped switches in the American consciousness—the discovery of missiles on Cuba, the bombing of the Pan Am flight over Lockerbie by Libya, and the 9/11 attacks, to name just a few—and prompted Americans to rally under the premise that shock and concern are not enough, and concrete action is needed. The norm against chemical weapons use is at a similarly critical juncture. When will the international community decide that UN Security Council resolutions and sanctions are not enough?

Among all the expressions of horror and words of condemnation—the international equivalent of thoughts and prayers—people continue to die from some of the worst weapons ever invented. The international community should seek to find serious options to hold perpetrators accountable and stop further chemical attacks. These are not easy choices, but the alternative is to accept that long-held norms are crumbling, and humanity is sliding back to a time of inhumane tools of war.

Natasha Lander is a senior policy analyst at the nonprofit, nonpartisan RAND Corporation.

This commentary originally appeared on RealClearDefense on April 18, 2018. Commentary gives RAND researchers a platform to convey insights based on their professional expertise and often on their peer-reviewed research and analysis.