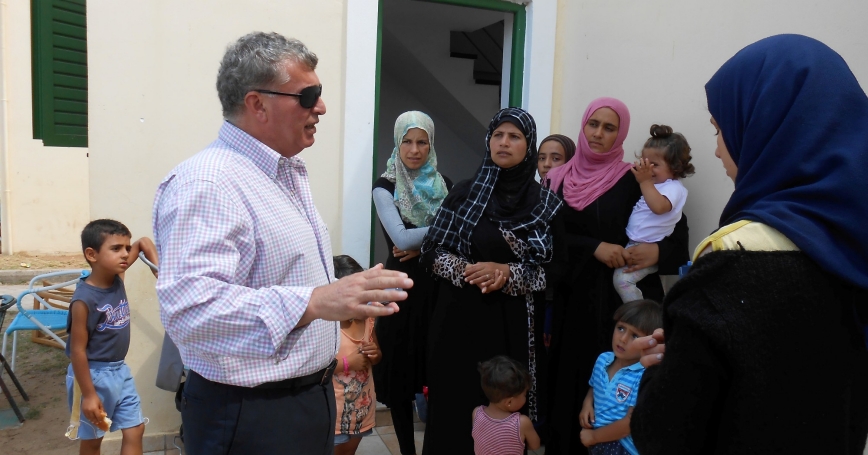 Since the Syrian civil war began in March 2011, over 6.1 million Syrians have been internally displaced, while an estimated 5.6 million more have fled the country. Within the European Union (EU), close to 1 million of these refugees have requested asylum in different countries, with Germany being the primary destination.

The response to the refugee crisis from international organizations and host country governments has largely focused on providing humanitarian assistance for refugees. International organizations including Oxfam (PDF) and Doctors Without Borders have argued that the international aid response has failed to keep up with the refugees' rising needs. Given that the Syrian conflict has already lasted for seven years, and with no short-term solution in sight, a strategy that addresses the evolving long-term issues of refugees in their host countries is essential.

In late 2016 and early 2017, the nonpartisan RAND Corporation conducted a study as part of the Pardee Global Human Progress Initiative to provide an overview of the situations of refugees and non-citizens in host countries, as well as to summarize policies and legislation regarding refugees. The study explored cases in seven countries, including Turkey, a main destination of Syrian refugees; Germany and the United Kingdom (U.K.), high-income countries in which public sentiment about refugees has shifted over time; Greece and Italy, border countries that have a large influx of refugees; and Canada and Australia, which have significant refugee populations despite being continents away from Syria and have also experienced some success integrating migrants and refugees.

The study considered cross-national survey data from the European Social Survey and the United Nations High Commissioner for Refugees, along with national data from selected countries to analyze attitudes, beliefs, labor market integration, and behaviors across various countries. The analysis focused on the economic activities individuals reported, including performing paid work, engaging in educational activities, or remaining unemployed.

In the context of increasing refugee flows from Syria, multiple E.U. countries' populations believe that refugees' presence could increase terrorism and take jobs and social benefits away from residents, according to the Pew Research Center's spring 2016 Global Attitudes Survey (PDF). In Greece and Italy, for instance, a majority of respondents stated their countries would be a worse place to live in if an increasing number of people from different races, ethnic groups, and nationalities lived there. Most respondents in Germany, Greece, Italy, and the U.K. agreed with the statement that refugees would increase the likelihood of terrorism in their respective countries.

The crisis has severely affected Turkey as well, since most Syrians who live in cities reside in slums and face social isolation, deepening the cultural rift already present between refugees and local citizens. Negative attitudes toward refugees may increase as shantytowns and makeshift housing areas grow, and as the government is increasingly pressed to provide adequate jobs, infrastructure, transportation, schooling, security, and other public services to the refugees.

Challenges faced by first-generation immigrants in the E.U. while trying to find suitable employment include a lack of language skills and the inability to transfer qualifications from one country to another. Nationality, religion, and social background are also barriers to obtaining jobs in Greece and Italy.

The criteria countries set regarding noncitizen employment also affect these individuals' abilities to access employment, since they must first meet host countries' basic requirements. For instance, Germany deems an individual's “willingness to be committed to the way of life in host country” important, while the U.K. emphasizes speaking the official language. Host countries must consider integrating these millions of refugees socially and economically, because the refugees will most likely stay in host countries for several years. Without integration, lack of employment opportunities makes refugees prone to becoming an underclass targeted with discrimination and susceptible to religious extremism.

Although employment indicators show that noncitizen residents of European countries report performing higher proportions of paid work than citizens, after studying those who reported being unemployed and actively looking for jobs, noncitizens showed higher levels of joblessness when compared to citizens in Germany, Greece, Italy, and the U.K. In Turkey, Turks and Syrians compete for low-skilled jobs, and most refugees are informally employed. To increase formal employment and create long-term, stable job opportunities for refugees, local labor markets and public and private agencies must consider refugees' previous work experience and abilities.

Despite these barriers, political commitment coupled with public support and community engagement—including private sponsorship of refugees—determined Syrian refugees' successful resettlement. Different stakeholders' involvement in Canada, which has resettled over 25,000 Syrian refugees, has helped successfully integrate them into Canadian society.

Germany, Austria, and Sweden have also improved active labor market policies and implemented mandatory integration measures, including an increase in funding for language courses and the development of mechanisms to assess previously acquired skills.

Germany has admitted one of the largest number of Syrian refugees—more than 25,000—partly due to legislative changes. In October 2015, the German government introduced several laws related to asylum procedures. The country amended its Asylum Act and Residence Act; the latter provides rules for the admission and handling of refugee claims. Other changes included accelerating the asylum application process, reducing the financial burden on states and municipalities, and improving refugee minors' safety. However, because some countries have also implemented procedures to reduce the (unauthorized) inflow of asylum seekers, it is difficult to determine whether these laws have increased the number of refugees admitted.

In comparison, migrants and refugees in Italy face growing negative sentiments, lack of political commitment, and little public support. Although Italy has enacted legal measures to provide protection to asylum seekers and to admit more refugees in recent years, organizations such as Doctors Without Borders perceive Italy's reception system of migrants and refugees as slow. Italy must now adapt its legislation to its high influx of refugees while managing local negative sentiments toward immigrants.

In the U.K, initial policy regarding the Syrian crisis was mainly limited to providing humanitarian aid and relief. In early 2014, however, the U.K. government announced it would take a more active role and created a program that settled the most vulnerable Syrian refugees. Public reaction to this effort, which was made following political pressure from the House of Commons and international organizations, was largely positive. The favorable environment for refugees in the U.K. according to the Migration Integration Policy Index (MIPEX) has led experts to conclude that immigrants might have higher chances of success when policies are coupled with the support of the native population.

First, Syrian refugees experience social and economic problems, which reinforce each other in host countries. Cultural and social issues affect economic integration and vice-versa. Some observers argue that the Syrian refugee crisis is a social harmony issue. At the same time, multilateral organizations point out that a strong and fair labor market promotes social integration. Job market competition might lead to social conflict with detrimental effects. To deal with these issues, a social integration program should accompany host countries' economic integration plans.

Second, integration of refugees into host labor markets might increase unemployment and reduce earnings of the native population. Host governments should consider including refugees in the formal economic sector to acquire decent earnings and social benefits. At the same time, this inclusion should not affect job opportunities for the native population, otherwise unemployment and negative attitudes toward refugees might increase. Policies must consider these conflicting objectives and tailor actions according to local socioeconomic and demographic conditions. Host governments should consider recording detailed information about refugees and share this data, so they can understand and better address the needs of refugees and natives.

Ernesto F. L. Amaral is an assistant professor in the Sociology Department at Texas A&M University. Mahlet A. Woldetsadik and Gabriela Armenta are assistant policy researchers at the nonprofit, nonpartisan RAND Corporation and Ph.D. candidates at the Pardee RAND Graduate School. This research was conducted with financial support from the Pardee Global Human Progress Initiative.

This commentary originally appeared on Georgetown Journal of International Affairs on April 20, 2018. Commentary gives RAND researchers a platform to convey insights based on their professional expertise and often on their peer-reviewed research and analysis.