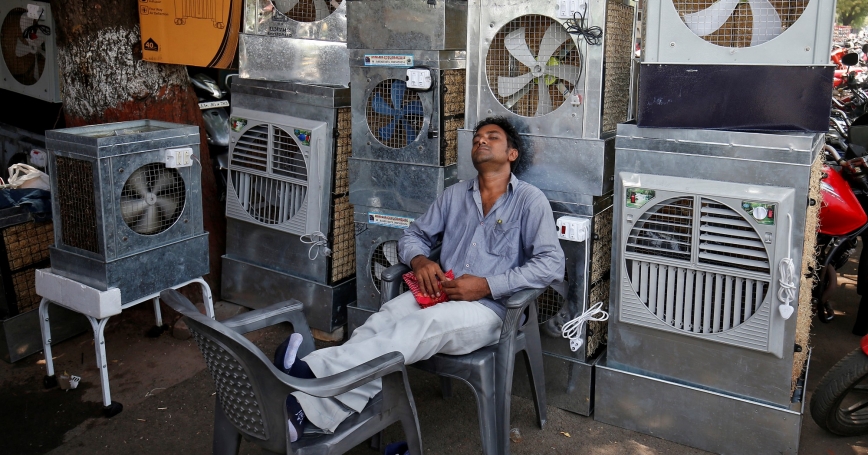 A man selling air coolers rests at a market on a hot summer day in Ahmedabad, India, May 4, 2017

Life Down Under got a lot hotter early this year as temperatures in southern Australia soared to over 46 degrees Celsius. The heat melted asphalt, severely stretched the country's power grid and killed hundreds of baby bats.

Under most climate change scenarios, temperatures are projected to increase. The new hotter normal will bring with it more heat waves. Granted, baby bats are more vulnerable to the heat than humans, but studies suggest that the heat of the future will exceed human coping capacity. What will humankind do then to survive?

The answer isn't as simple as turning on the air conditioning, which is an energy-intensive process. To run the air conditioner, electricity made from fossil fuels—coal and oil—is chiefly used. And both fuels emit greenhouse gasses (GhGs) as they burn. Keeping a 100-watt bulb lighted for one year burns more than 322 kilograms of coal and releases a whopping 840 kilograms of carbon dioxide plus GhGs like sulphur dioxide and nitrogen oxides. A typical large window-unit air conditioner uses 15 times that amount. If the billions of people in Asia and Africa not yet on the power grid are added to the air-conditioner equation, it creates an enormous problem.

Cooling the air this way heats the planet while depending on a highly inefficient process. Only 40 per cent (PDF) of the coal burned is converted into usable electricity, the rest is lost as heat. HFCs and other refrigerants used in air conditioning and refrigeration are themselves powerful GhGs. So, in addition to the greater energy demand, there is also the potential for climate change to be exacerbated by the increased release of these gases into the atmosphere. Air conditioning contributes to heating the planet and wastes energy and fuel.

Coping with the Heat

Many parts of Africa and South Asia are slowly extending their power grids, and it would be foolish for these regions to rely mainly on traditional electricity generation to cope with heat and meet the energy needs of growing populations. Developed nations like Australia have become aware of the need for new combinations of renewable energy use, off-grid energy solutions such as home lighting with solar power, and cooling options that involve adapting lifestyles to the heat.

I grew up in Uttar Pradesh, the most populous and among the least developed states in India. My childhood memories include long power outages—both announced and unannounced—in blistering hot summers. To cool down we used to spray water on each other from a bucket and employed a variety of traditional heat mitigation and adaptation techniques, including staying indoors or in the shade, playing in the evening, and studying in the early morning. It did not do away with our discomfort, but we survived.

While electricity is a relatively recent phenomenon, people likely have been forced to survive in baking heat since time immemorial. Their experiences can help guide current efforts to create a trinity of energy alternatives rooted in renewables, off-grid solutions, and non-energy intensive cooling.

Local people from India to Namibia have developed heat-appropriate housing designs (PDF). In India, airy houses are made of heat-resistant materials such as wooden beams with plastered brick walls (as opposed to glass and steel), with high roofs and overhangs that shade windows are cooler in summers. Thermal buffer walls using traditional design elements like Jaali (double skins) and heat sinks based on baoli (stepwells) are being used in modern designs. Even minor tweaks such as orientating a house away from sun and using white reflective paint on the roof can cool down interiors by several degrees without consuming energy. Situating a house to take advantage of trees so it doesn't sit in direct sunlight can be helpful. Evaporative coolers that consume less electricity can be used as water is used to cool the air. Simple wet curtains made of jute and grass can also bring down temperature. For humid heat, design features promoting air flow, separating washing and cooking facilities are helpful.

New alternative building technologies are also on the way. Geothermal cooling designs are being developed so they can cool houses without using manufactured energy. The ingenious approach involves transferring the cool, stable temperature of the earth's underground (12 degrees Celsius) into homes by using underground water pipes.

Simple lifestyle changes also can make a big difference. The most common-sense methods of staying cool are water-based: carrying water bottles and staying hydrated. Light food low in protein and high in water—yogurt, watery fruits, and vegetables—provide fluids and electrolytes lost through sweating. Avoiding overexertion in the peak afternoon sun can be lifesaving. Light-coloured, loose, and airy clothes long worn in desert regions and historically hot climates can keep the wearer cooler than tight-fitting clothes. Newer materials are also being designed that can cool the wearer.

In addition, the sources of energy available to meet the demands of daily living need to be diversified—and soon. These include off-grid solar panels to provide electricity for lighting and small appliances and the increasing use of renewable energy like wind power that can feed into the power grid.

To be sure, air conditioning will continue to help cool those who have access to it and can afford it. Air-conditioned shelters also can be lifesaving during heat alerts and acute emergencies. But in terms of global solutions, the energy-intensive heat adaptation solutions that have worked in the West might be avoided in developing country settings. And energy-efficient air conditioning using photovoltaic energy and reverse inverter DC heat pumps are becoming common.

A sustainable path forward in heat-challenged regions could be provided by taking advantage of smart technology, inexpensive traditional methods that require little energy use, and innovative energy-efficient technologies. Going forward, renewable energy is critical to helping prevent further climate change and allowing sustainable adaptation to the consequences of climate change.

A better quality of life is attainable with lower electricity usage—less costly cooling that is kinder to the planet.

Gulrez Shah Azhar is an Aspen New Voices alumnus, an assistant policy researcher at the nonprofit, nonpartisan RAND Corporation and a Ph.D. candidate at the Pardee RAND Graduate School.

This commentary originally appeared on Science and Development Network on April 18, 2018. Commentary gives RAND researchers a platform to convey insights based on their professional expertise and often on their peer-reviewed research and analysis.