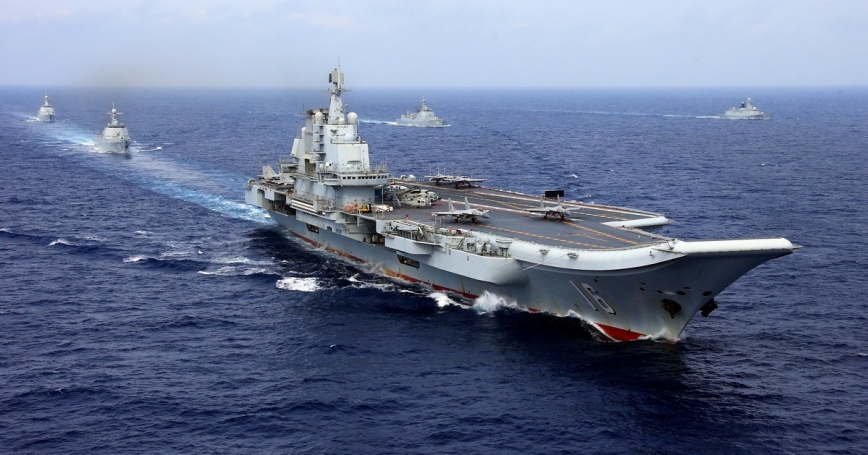 Just hours after staging the largest display of naval forces in its history in the South China Sea on April 12, China announced that it would abruptly pivot to conducting live-fire military drills in the Taiwan Strait six days later. The bombastic exercises went ahead—and Beijing followed up with several recent bomber flights around the self-governing island as well.

According to the Chinese nationalist tabloid Global Times, Beijing felt compelled to proceed with the exercises to “check ‘Taiwan independence'” and because “the US has been containing China on the Taiwan question.” And it's been exactly Beijing's perception or misperception of these two factors—the political status of Taiwan and how close Taipei and Washington have become—that have come to dominate cross-strait relations in recent months, substantially raising the risk of military conflict.

But what Beijing won't admit is how much its own actions have driven Taipei's and Washington's responses.

Since the founding of the People's Republic of China in 1949, Chinese leaders have always viewed Taiwan as a renegade province that needed to be brought back under the mainland's thumb. Times were good from 2008 to 2016 under Taiwan's then-president, Ma Ying-jeou, who regularly implied that Taiwan was part of China—albeit in some ambiguous and to-be-determined way. After all, Ma's party, the Kuomintang, had traditionally maintained its own version of “One China”—although one in which they were the rightful inheritors of the imperial legacy, not the Chinese Communist Party. But with the inauguration of President Tsai Ing-wen of the historically pro-independence Democratic Progressive Party (DPP) in May 2016, Beijing has expressed increasing frustration with what it sees as Taiwan quietly inching toward independence. Chinese President Xi Jinping has on numerous occasions forcefully dismissed Tsai's olive branches because of her continued refusal to recognize the “1992 Consensus”—a concept that acknowledges the existence of only “one China,” but that allows each side its own interpretation.

Most recently, at the National People's Congress held in March, Xi railed against Taiwan's “acts and ploys,” saying such activities “will be condemned by the Chinese people and punished by history.” In Chinese eyes, Tsai's affiliation with the DPP automatically makes her motives suspicious. Beijing has not forgotten nor forgiven Tsai's work in the late 1990s on then-Taiwanese president Lee Teng-hui's “special state-to-state” formulation of cross-strait relations, implying two separate and sovereign states on either side of the strait. Tsai has also been attacked personally, with a senior Chinese military official criticizing her for being “extreme” and “emotional” because she is unmarried. Although his posting was quickly taken down and roundly condemned in China, the fact that the article ever appeared in the first place in the International Herald Leader—a newspaper affiliated with the state-run Xinhua news agency—speaks to the depths of vitriol mustered against Tsai.

But distrust of Tsai isn't the primary force shaping the mainland's thinking. Beijing sees two other, even more sinister, trends developing in Taiwanese politics. The first is Tsai's decision in September to appoint Lai Ching-te, or William Lai, to the premiership. Lai is the former mayor of Tainan, which is located in the deep south and considered a DPP stronghold. In late September, during an open session of the legislature, he unambiguously advocated Taiwanese independence.

When confronted with these remarks the following week, Tsai responded that Lai knew “what the limits are” of government policy. More recently, Lai on several occasions has professed to be a “political worker for Taiwanese independence.” Tsai has failed to unequivocally condemn these comments, recently calling Lai an “honest man” with no “other special ideas.” These statements, along with her earlier rejection of Lai's speech in the legislature, were probably not categorical or forceful enough to appease Beijing.

Additionally, two former presidents have joined forces in a grassroots effort to push for a referendum on Taiwanese independence. Lee, of the Kuomintang, and Chen Shui-bian, of the DPP, are seeking a vote by April 6, 2019. They specifically picked this date to signify Deng Nan-jung's self-immolation in the name of “100 percent freedom of expression” 30 years prior. Tsai has not condemned this campaign either.

Beijing also worries about the underlying motivations of the Trump administration for improving relations between the United States and Taiwan. In December, President Donald Trump signed into law the 2018 National Defense Authorization Act, which allows the Pentagon to send warships to Taiwan. Although the law does not require Washington to do so, it opens the door to such a possibility. China responded by arguing that the act violates the U.S. “One China” policy, whereby Washington only recognizes Beijing as China's government.

A Chinese diplomat at an embassy event in Washington went much further, saying that “the day that a U.S. Navy vessel arrives in Kaohsiung is the day that our People's Liberation Army unifies Taiwan with military force.” On March 16, Trump also signed the Taiwan Travel Act, which encourages “visits between officials from the United States and Taiwan at all levels.” Then, perhaps on cue, Deputy Assistant Secretary of State Alex N. Wong four days later visited Taiwan and met with Tsai, noting that the U.S. relationship with Taiwan “has never been stronger.”

Meanwhile, Trump's decision to appoint former United Nations Ambassador John Bolton as his national security advisor has ruffled feathers in Beijing. Bolton in the past has argued for the need to reconsider the U.S. “One China” policy, and he is rumored to be attending the opening of the new American Institute in Taiwan facility in June. Separately, Trump has authorized the State Department to allow U.S. defense firms to sell components to Taiwan for its indigenous defense submarine program—another highly sensitive issue.

And finally, the Trump administration's release of its National Security Strategy (PDF) and National Defense Strategy (PDF) this winter refer to China as a “revisionist” and “rival” power. Thus, Beijing is suspicious that Washington is trying to improve relations with Taiwan to bolster its Indo-Pacific strategy, which is designed, in large part, to work with allies and partners to counter Chinese coercion of regional neighbors. From Beijing's perspective, doing so would be tantamount to playing the Taiwan card to contain China.

As much as Beijing likes to argue that Taiwanese domestic politics and the upgrade in U.S. interactions with Taiwan are to blame for exacerbating cross-strait relations, the fault lies in Beijing. Taiwan and the United States are actually responding to increasingly aggressive Chinese behavior in the Taiwan Strait since the moment Tsai appeared to have a good chance of winning the presidency in late 2015. China has ratcheted up diplomatic, economic, and military pressure tactics to express its displeasure. It is difficult to know whether Xi's recent success in abolishing term limits and his years-long intimidation of political rivals through his anti-corruption campaign now means he can more easily turn up the heat on Taiwan. But China's growing economic and military strength only bolsters Xi's confidence in his Taiwan policy.

Tsai has actually been both pragmatic and cautious in dealing with the delicate issue of Taiwanese sovereignty and independence, and at every turn has sought to maintain the status quo of peace and stability in the strait. Most notably, Tsai recognized the “historical fact” of the 1992 Consensus—something no other DPP president has ever done. This alone makes her the best DPP president Xi could hope to have in Taiwan. But Tsai's popularity is falling, and Lai's is on the rise, suggesting that Chinese threats and pressure are having the counterproductive effect of rallying voters who want independence.

And recent U.S. moves, though seemingly bold, have not substantively changed the “One China” policy in any way. Trump himself recognized the “One China” policy. Indeed, the Trump administration is simply carrying out its obligations under the Taiwan Relations Act to defend Taiwan from Chinese attack or any other form of coercion. Clearly this is necessary, as the China of today is far more militarily advanced and prepared for military conflict than the China of 1982, when the act became law.

Beijing, however, does not seem to care. As a result, Taiwan and the United States must prepare for greater hostility in the coming years, almost certainly lasting out to the next Taiwan presidential election in 2020. By that time, Beijing hopes its pressure tactics will have borne fruit and it will have a new Taiwanese president who is more amenable to keeping the 1992 Consensus in place. If Tsai wins reelection—or another, even more anti-mainland candidate, such as Lai, gets elected—then another four years of tension and possibly military conflict are likely.

This commentary originally appeared on Foreign Policy on May 22, 2018. Commentary gives RAND researchers a platform to convey insights based on their professional expertise and often on their peer-reviewed research and analysis.