Toward One Understanding of Multiple Domains 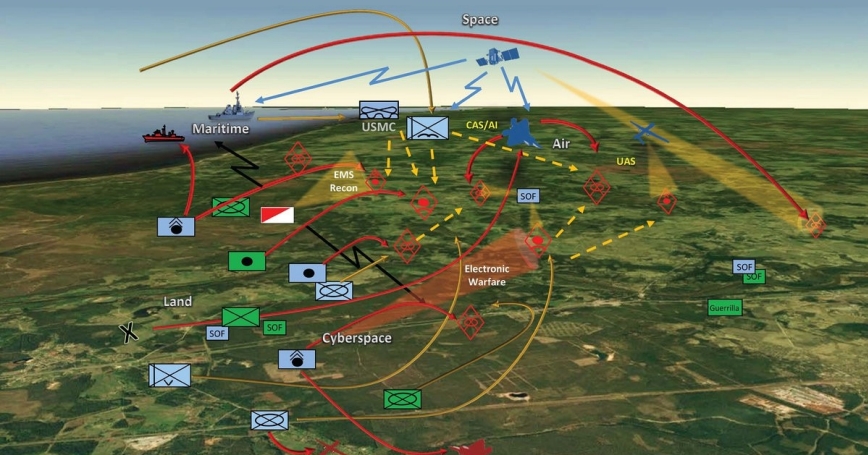 Budget analysts claim that it's all about the money, but often-maligned strategists know that the U.S. Department of Defense is actually ruled by words. Every few years the U.S. defense community latches on to a new term that influences the efforts of the armed services, the Office of the Secretary of Defense, the Joint Staff, and the various agencies, labs, think tanks and others responsible for building and maintaining the U.S. military enterprise. Words move money.

Every few years, often at the beginning of an administration, a new buzzword emerges: “revolution in military affairs (PDF),” “transformation,” “third offset,” or even “counter anti-access and area denial.” At their root, each of these terms has sought to drive efforts to improve U.S. military capabilities to deter and, if necessary, defeat sophisticated adversaries.

Buzzwords encapsulate a series of more complex ideas into a handy label, but bring with them the danger of conceptual confusion. Different actors in the defense community appropriate the buzzword and use it to advance their own goals, which may or may not conform with the term's original meaning or intent. This is how we get howitzers.

Different actors use [buzzwords] to mean different things, which can create confusion among those who make and implement policy.

Different actors use the buzzword to mean different things, which can create confusion among those who make and implement policy. It's a trite but true statement that the world is a complex place, and conceptual confusion makes everything more difficult. Poorly understood terms waste time, money and, potentially, lives. The American defense enterprise is likely to continue to rely on buzzwords, so we should do all we can to make them more rather than less meaningful. If we can't get rid of buzzwords, at least we can try to make them useful.

Some seem to think that multidomain is about bringing space and cyber capabilities to support the ground fight (PDF). Others argue that multidomain is about bringing together command and control of air, space, and cyber, and about training a new generation of multidomain officers. On top of that, there is new interest in how artificial intelligence, robots and perennial favorite lasers can help win wars. Some of these capabilities will work and some will not, and the United States should consider moving forward in a way that can adapt to the inevitable combination of technological success and failure.

Defense community curmudgeons, and there are many, will point out that the United States has already been coordinating military operations across domains. After all, humans have used armies and navies in tandem for thousands of years. Arguably, nearly 115 years after the invention of powered flight humans are still learning how to incorporate the air domain into warfare. The use of space is even more recent, dating from the 1957 launch of Sputnik, and cyber is undoubtedly in its infancy, employed for espionage and other malicious purposes since its inception.

It may be impossible to clear up the latest conceptual confusion facing the U.S. defense community, but there we can dial it down, manage expectations and move forward more sensibly. Given the vast sums of resources involved, the lives at risk, and the stakes involved in promoting U.S. international leadership, it is important to get this as right as possible.

A more nuanced understanding of multidomain along these lines could help the Department of Defense improve its ability to defeat high-end adversaries. Allowing conceptual confusion to continue and to grow could jeopardize progress and eventually relegate multidomain to the ash-heap of buzzwords that may only interest historians, retired bureaucrats and defense geeks.

To make multidomain useful, it has to be meaningful. Let's propose that multidomain operations are those that bring together capabilities from at least two of the following domains: air, cyber, land, sea, space and the electromagnetic spectrum. The current focus on multidomain rises from a growing sense that the space and cyber domains will have an important impact on future military operations. Both threats and opportunities are at play here.

For example, there is a sense that by harnessing space and cyber in new ways, the U.S. military can gain operational advantages over potential adversaries. There is also great concern that potential adversaries, after having witnessed U.S. conventional military dominance in recent years, are likely to turn to new ways of waging war that target U.S. dependence on capabilities provided via space and cyber.

It is important to distinguish between multidomain and joint. Joint is about working across services, and the U.S. military services are not neatly aligned to domains. The Army operates primarily on the ground, but flies helicopters and even operates ships. The Air Force operates in air, space and cyber, but bases its aircraft, command centers and other facilities on the ground. The Navy has its own aircraft, and the Marines also combine air and ground forces that often operate from ships.

It is possible to collaborate across domains within one service. For example, targeting an enemy surface-to-air missile radar with a satellite and passing the location to an aircraft to launch a cruise missile against it can be done using solely Air Force assets. It is also possible to collaborate across services without collaborating across domains, which we might see when a Navy F-18 passes threat information to an Air Force F-16.

For example, the current practice of having operational commands divided among, yes, domains (e.g. the air component, land component and maritime component) offers opportunities to make the joint whole more than the sum of its service parts. At the same time, the U.S. armed services have not yet reaped all of the benefits provided by joint operations, which indicates the need for modesty about how many “quick wins” are likely from the multidomain campaign.

There is debate about how truly joint the U.S. military is. Critics can point to the initial stages of Operation Iraqi Freedom, where the Army and Marine Corps essentially fought two separate battles on different sides of the Euphrates river. Marine and Navy aircraft are often listed on Air Tasking Orders, but they often are devoted to missions focused on their own services rather than contributing to the joint fight. Arguably, the U.S. military is more joint than others, but there is much more progress that it could make. By increasing cross-domain collaboration, the U.S. military can hope to reap some of the benefits that it has not yet achieved through the drive to improve jointness.

The U.S. defense community would do well to acknowledge that the effort to harness and integrate more domains will take some time. Senior leaders may want quick “wins,” and they shouldn't be neglected, but it is advisable to set realistic expectations about how quickly knowledge will advance.

Understanding the impact of new technologies on warfare is far from simple. War games, exercises and simulations are useful, but it often takes actual operational experience, against a live adversary, to understand the impact of a new capability on military operations. History shows that initial conceptions of the operational impact of a range of technologies, including the airplane and the tank, have often proven to be inaccurate, misleading and prone to bureaucratic influence as established interests defend the status quo.

This argument does not seek to stifle innovation or to bolster those who fear change. The U.S. defense community can and should do what it can to obtain the maximum benefit from operating across domains. It just needs to remember to proceed carefully to discern between actual benefits and falsehoods that may do more harm than good.

Michael Spirtas is a senior policy researcher at the nonprofit, nonpartisan RAND Corporation. He is currently leading an effort for Air Combat Command on multidomain operations, and has worked on operational concepts, force development and defense strategy at OSD Policy, the Air Staff and at RAND. He uses words every day.

This commentary originally appeared on C4ISRNET on May 1, 2018. Commentary gives RAND researchers a platform to convey insights based on their professional expertise and often on their peer-reviewed research and analysis.