Why Russia Should Not Rejoin the G7 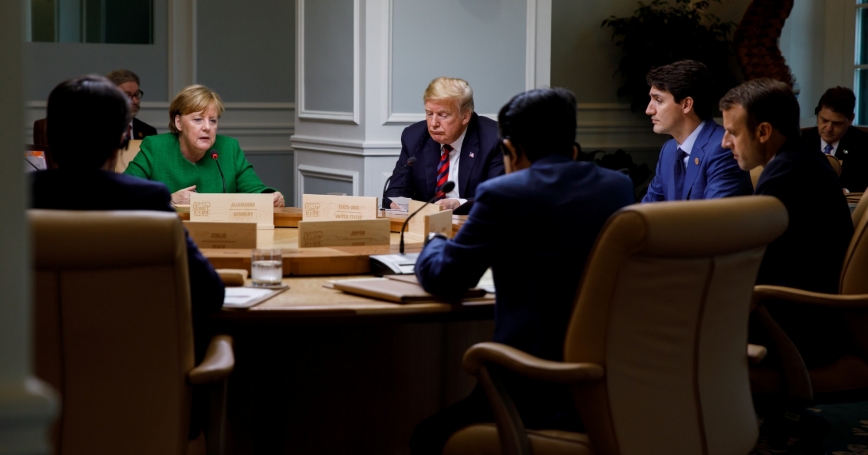 G7 leaders take part in a working session on the first day of the G7 meeting in La Malbaie, Quebec, Canada, June 8, 2018

The world's largest free market democracies have met annually at the summit level since 1975. President Trump has proposed that Russia should be included in future meetings. But Russia would not seem to qualify on any count.

It has a crony capitalist economy and an illiberal democracy. And it is not one of the world's 10 largest economies. According to the World Bank, China, India and Brazil have bigger gross domestic products, and the latter two are also market democracies.

Russia was added to these meetings in 1997 at a time when hope remained that democratic and economic reforms would take hold there. Russia was disinvited beginning in 2014 after it seized Crimea and invaded eastern Ukraine.

I helped, in a small way, to organize the first of these summits, which took place in Ramboullet, France. There the main issue was the somewhat arcane issue of exchange rates. France favored fixed exchange rates set by the government while the United States favored floating rates determined by the market.

Nine years later, with Canada added to the original six, the Group of Seven economic powers endorsed Ronald Reagan's controversial effort to deploy mobile nuclear-tipped missiles capable of reaching Moscow in five European countries. In 1989, as the Cold War drew to an end, I helped organize a summit endorsement of Western economic assistance to East European countries that were democratizing even before they left the Soviet-dominated Warsaw Pact.

The decision to add Russia to the Group of 7 was clearly aspirational. The Clinton administration, which championed that invitation, hoped that Russia, then led by President Boris Yeltsin, would succeed in consolidating its nascent democracy and revitalizing its economy on free market principles. And for a while this held some promise. Russia collaborated within the G8 framework, for instance, in ending the Kosovo conflict.

Under the auspices of the 1999 G8 summit, a small group of us negotiated what became the U.N. Security Council resolution ending the NATO air campaign, removing Serbian forces and authorizing the deployment of NATO troops, which eventually included a Russian contingent.

The following year Vladimir Putin succeeded President Yeltsin. The hope that Russia would follow the rest of the former Warsaw Pact on the road to market democracy gradually faded.

Even were it to disgorge the parts of Ukraine that it seized in 2014, Russia still would not qualify for reentry into the G8. If raw power and influence were the criteria, then it would seem China should be the next member. If democracy and an open economy were the measure, then India should be next.

Russia cannot qualify based on size, but might based on an embrace of democratic values. Thus an aspirational case for Russian membership might once again be made, but only if Russia's leadership again aspires to democratic government and an open free market economy. At the moment there is no sign of such an aspiration.

James Dobbins is a senior fellow and distinguished chair in diplomacy and security at the nonprofit, nonpartisan RAND Corporation, a former assistant secretary of state for Europe, and the author of Foreign Service: Five Decades on the Frontlines of American Diplomacy.

This commentary originally appeared on USA Today on June 12, 2018. Commentary gives RAND researchers a platform to convey insights based on their professional expertise and often on their peer-reviewed research and analysis.