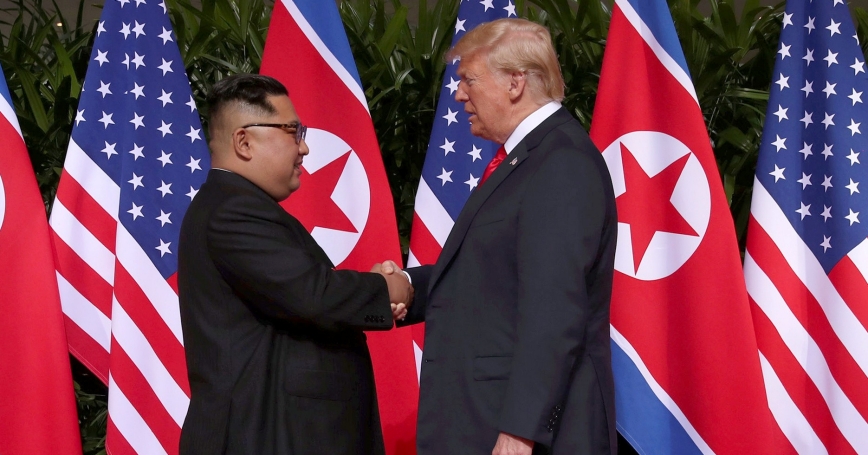 The joint statement issued by the American and North Korean leaders after Tuesday's Singapore summit is a shorter and weaker version of promises made by Kim Jong Un's father and grandfather — and those made by the younger Kim to South Korean President Moon Jae-in less than two months ago.

In the declaration signed with President Donald Trump, Kim promises “to work toward the complete denuclearization of the Korean peninsula.” That echoes the 1991 statement, when the two Korean leaders at the time pledged not to “test, manufacture, produce, receive, possess, store, deploy or use nuclear weapons” or to “possess nuclear reprocessing and uranium enrichment facilities.” In 1994, North Korea agreed with the United States to dismantle its nuclear reactors in exchange for an American promise not to attack the North, to end sanctions, to provide the North with alternative energy sources and to normalize relations between the two countries. In 2000, Kim Jong Un's father offered Secretary of State Madeleine Albright a ban on the production and deployment of long-range missiles.

In 2006, North Korea reaffirmed to the United States, South Korea, China, Russia and Japan its commitment to complete denuclearization.

Kim Jong Un's promise to “work toward” denuclearization would on its face seem to have little more force than the American promise made more than 40 years ago to “pursue negotiations in good faith” toward nuclear disarmament and “a treaty on general and complete disarmament.” This American commitment was embodied not in a joint statement but a treaty ratified by the U.S. Senate and still in force today.

Trump's promises in the joint statement are equally general. Although not mentioned in the written document, the U.S. president agreed to halt U.S.-South Korean joint military exercises while Kim agreed to halt nuclear and long-range missile tests. In substance, therefore, the Trump-Kim meeting has produced the “freeze for freeze” bargain that China had been long urging. This is a modest result for all the fanfare, but one worth having. As long as the freeze continues North Korea will not be able to complete development of an operational ICBM capable of delivering nuclear warheads on American cities.

This is the third time the United States and North Korea have started down this path toward denuclearization and normalization of relations. Previous efforts failed not just because the North Koreans cheated, but because neither side fulfilled its commitments. The Clinton administration promised to provide North Korea with fuel oil and new proliferation-resistant reactors in exchange for shutting down its old ones. Congress was slow to fund the fuel oil while Japan and South Korea balked at paying for and supplying the new reactors. Clinton was also slow to move ahead with the promised normalization of relations. Under President George W. Bush, resistance to implementing the six-party agreement came from hard-liners within his administration, including Vice President Dick Cheney and John Bolton, U.S. ambassador to the United Nations (and now Trump's national security adviser).

The path to denuclearization is now a lot longer than it was a decade or two ago.

The difference now is that Trump and Kim have committed themselves to this effort earlier on in the process and more publicly than their predecessors did. Kim seems unassailable at home and Trump has shown a remarkable ability to reshape long-held views of his party. But the path to denuclearization is now a lot longer than it was a decade or two ago. Experts maintain it could take 10 to 15 years to dismantle North Korea's nuclear infrastructure, which is much more extensive than it was then. At least one of the two leaders will no longer be in office by then. And the United States can never be certain that Pyongyang has surrendered every single nuclear weapon.

Experts may cavil at the summit's limited results, but most Americans and Koreans will be relieved. Kim's many provocations and Trump's heated rhetoric may have been instrumental in driving the two adversaries toward the encounter. Certainly, the anxiety their earlier insults provoked — Trump called Kim “little rocket man”; Kim called Trump a “dotard” — has made their rapprochement all the more welcome.

If anyone deserves credit for this achievement it is South Korean President Moon, whose fingerprints are all over the Trump-Kim statement. Both Trump and Kim have demonstrated the ability to turn on a dime, Trump as recently as Sunday when he refused to sign the G7 communique only hours after agreeing to it. Bringing these two impulsive and headstrong leaders together was a remarkable achievement. Sustaining their rapprochement will be even more demanding.

James Dobbins is a senior fellow and distinguished chair in diplomacy and security at the nonprofit, nonpartisan RAND Corporation, a former assistant secretary of state, and the author of “Foreign Service: Five Decades on the Frontlines of American Diplomacy.”

This commentary originally appeared on Reuters on June 13, 2018. Commentary gives RAND researchers a platform to convey insights based on their professional expertise and often on their peer-reviewed research and analysis.