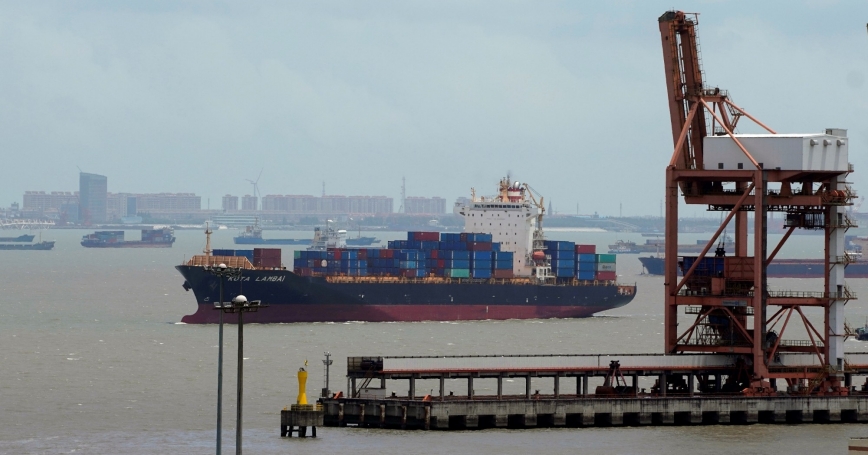 The trade war between the United States and China began on July 6 with the notification of tariffs on $34 billion of traded goods on each side. Officials on the two sides of the Pacific are using different messages to convey the dispute. What are the real impacts likely to be?

Beijing's official message falls in line with standard economic theory, which holds that everyone loses in a trade war. China's second message is less in step with economic theory. It is that on grounds of maintaining its sovereignty, the Chinese will retaliate.

We do not need to spend too much time on the Chinese messages, since the basic argument is quite straightforward: Tariffs make goods more expensive and will therefore reduce demand. Exporters will lose business, make less profit, and employ fewer people.

On the U.S. side, there is an acceptance that business will be lost, but the message is that the United States is sure to win in relative terms, thus putting the Chinese at a disadvantage. There seem to be two main arguments being put forward by official sources to support this message. First, the U.S. economy is doing well and is unlikely to be affected by China's retaliatory tariffs, which will impose a tiny burden relative to the size of the U.S. economy. Second, even if this leads to escalation, the United States has less to lose since its exports to China are $130 billion while China's exports to the United States are $505 billion a year. In a tit-for-tat exercise, it is argued, China will run out of exports to levy retaliatory tariffs upon long before the United States does. Further, $505 billion in potentially lost exports is a much larger slice of the Chinese economy (about 5 percent) than $130 billion is for the United States (about 0.7 percent).

The U.S. tariffs on 818 items average 25 percent. The items are largely machinery and equipment, which as categories constitute the single largest set of exports from China to the United States. Within this group, the Trump administration has selected relatively high-technology items, such as aircraft tires, lithium batteries, and radar equipment. This, according to the U.S. Trade Representative, is the result of a deliberate strategy designed to weaken China's drive to be a sophisticated exporting country by 2025. Consumer goods, including sophisticated items such as smartphones and monitors, are not on the list, presumably because tariffs would directly and quickly affect consumers, who might protest the higher prices.

The problem with this approach is that it hits American companies whose supply chains have been built around Chinese machinery and equipment. Eliminating Chinese vendors from the supply chain will take time and could be costly. In the short term, firms could pay up the tariffs and mostly maintain imports. The immediate effect of such a choice would be a rise in business costs of $8.5 billion (25 percent of $34 billion). This rise would be matched by a rise in U.S. government revenue. Firms would likely cut back employment in order to pay the tariff. The net result: a transfer of money from American businesses to the U.S. government of $6.7 billion (after accounting for savings in direct taxes of 21 percent); some, though likely a small, reduction in U.S. employment; and an equally small reduction in Chinese exports to the United States. It is thus hard to imagine any significant adverse impact on China from the American actions. Even this small effect has been partly mitigated by exchange rate movements. From early April, when the talk of trade wars began in earnest and the Chinese yuan was valued at 6.28 to the dollar, the currency has depreciated by 6 percent to 6.64 to the dollar as of July 6.

The Chinese list, meanwhile, includes 128 items, a large number of which are food products (89 items), wines (5 items), and steel pipes (33 items). A key difference from the U.S. list is that the Chinese have targeted lower-technology and consumer-facing goods. These are unlikely to disrupt producer supply chains. These items are also relatively easy to source from other countries. Even the industrial items—primarily steel pipes—are easier to replace with competitive products from other countries than industrial machinery and equipment. Further, the tariffs levied by China are lower, typically 15 percent, compared to the U.S. tariffs of 25 percent, so the impact on importers will be easier to bear.

Chinese businesses are therefore likely to lose less overall than American businesses from this first round of the trade war. Consumers in China will likely be unaffected as food importers in China switch to other exporting countries, such as Australia.

The second argument is that, since America runs a large trade deficit with China, the Chinese will run out of items on which to raise tariffs, while the United States can keep on going. The problems with this argument are two: First, if the United States wants to avoid taxing consumer goods imports, it would be dealing with a much smaller list of imports. Consumer goods (including consumer durables, food, textiles, and footwear) account for $292 billion, or 58 percent of all U.S. imports from China. This leaves about $213 billion worth of industrial goods and other goods that could be subjected to tariffs. China, on the other hand, has already shown it is willing to levy tariffs on consumer items. The true gap is, therefore, $84 billion ($213 billion less $130 billion). Further, China can adjust tariffs to higher rates than the U.S. levies, further reducing the effective gap (for instance, a 20 percent tariff on $100 billion worth of imports raises the same tariff revenue as a 10 percent tariff on $200 billion worth of imports). This argument, like the one before it, does not seem to support the message of an American win.

The above analysis is a first-stage impact assessment and shows an apparent gap between policymaker claims and likely outcomes. If the trade war continues, there are likely to be multiple stages and multiple consequences. For example, importers usually lose when their vendors overseas raise prices. How will American importers of machinery fare now that Washington has raised tariffs on Chinese machinery exports? What about the impact on American firms that produce in China for export to the United States? As the above analysis shows, even a first-stage assessment can indicate that policymakers need to be more cognizant of impacts. As the first trade war of this century gets under way, understanding the impacts is likely to be increasingly important.

This commentary originally appeared on RealClearWorld on July 13, 2018. Commentary gives RAND researchers a platform to convey insights based on their professional expertise and often on their peer-reviewed research and analysis.