A Better Way to Think About Scooters 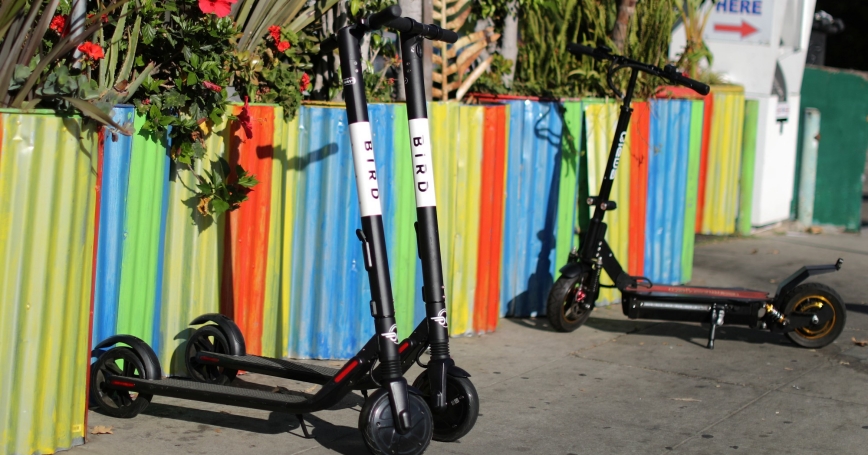 Bird scooters outside a restaurant in Santa Monica, California, July 23, 2018

It's hard to believe that less than a year has passed since Bird scooters first appeared on the scene. Unleashed in Santa Monica last September, they and their competitors are now in 30 American cities and counting.

Some people love the electric scooters for the convenience, novelty, and plain fun of riding them. Many others dislike them for cluttering streets and making sidewalks unsafe.

Cities are now responding to the scooter takeover with new regulations and increased law enforcement. Santa Monica has banned rental scooters from sidewalks, deployed police to ticket riders, and limited the number of operating licenses to a few select firms. Los Angeles has temporarily banned rental scooters altogether while city officials consider how best to regulate them.

Such adjustments are appropriate. But if officials rely only on 20th-century tools to integrate these 21st-century scooters into their cities, they will miss a big opportunity.

Information technology is what makes Bird scooters possible: sensors, big data, the internet of things. So far scooter firms have optimized this technology for private gain. The companies could be impelled to use the same technology to help solve the problems their scooters have introduced.

When it comes to traffic laws, for instance, cities could require that rental scooters be self-enforcing. With their GPS tracking and wireless connectivity, the scooters already transmit their approximate location. If they were outfitted with an inexpensive motion sensor and forward-looking camera, scooters could be programmed to detect when they are being driven or parked on a sidewalk rather than a bike lane, say, or if the current rider's weight matched that of the person whose driver's license was provided at the time of rental.

Privacy could be protected by keeping customers anonymous, matching riding data to riders only if an infraction is recorded. Each rider could be allowed a few warnings. After that, and with privacy protections, the scooter company could determine the appropriate fine and, if the rider wanted to contest the violation, send him or her an invite to traffic court.

Scooters would still be convenient, but they would be much safer and less disruptive, and the police could spend their time on other things.

Perhaps more important, scooter firms could help cities tackle transit challenges. For example, the “last mile” problem has proved an enduring one, especially in Southern California: Buses or light rail can take someone across town, but if the walk from the last station to final destination is longer than a few blocks, many people will opt to drive instead.

Scooters could be deployed strategically to address the last-mile challenge, and firms could be rated on the extent to which they help solve it. As cities allot resources and limits, such as the number of scooters allowed on city streets, they could give preference to firms that helped most.

The technology required to do most of this is no more complex than that which made scooters a viable business to begin with. Cities simply need to provide the right incentives. Santa Monica has taken a step in this direction by requiring age verification software on scooters.

The rental scooter industry has taken some corrective measures. As part of a “save our sidewalks” pledge, Bird committed to picking up its scooters each evening, monitoring supply and contributing a portion of company revenue toward developing bike lanes. But firms like Bird could be doing much more.

Pretty soon, this won't be about scooters alone. More disruptive transportation technology is on the horizon, including self-driving cars. These new systems could increase safety, reduce congestion, and provide more mobility across the board, provided the technology is harnessed for more than profit.

Robert Lempert is a principal researcher at the nonprofit, nonpartisan RAND Corporation and director of the Frederick S. Pardee Center for Longer Range Global Policy and the Future Human Condition. Tim McDonald is an assistant policy researcher at RAND and a doctoral candidate at the Pardee RAND Graduate School. Andrew Lohn is an engineer at RAND.

This commentary originally appeared on Los Angeles Times on August 28, 2018. Commentary gives RAND researchers a platform to convey insights based on their professional expertise and often on their peer-reviewed research and analysis.