The Growing Risk of a New Middle East War 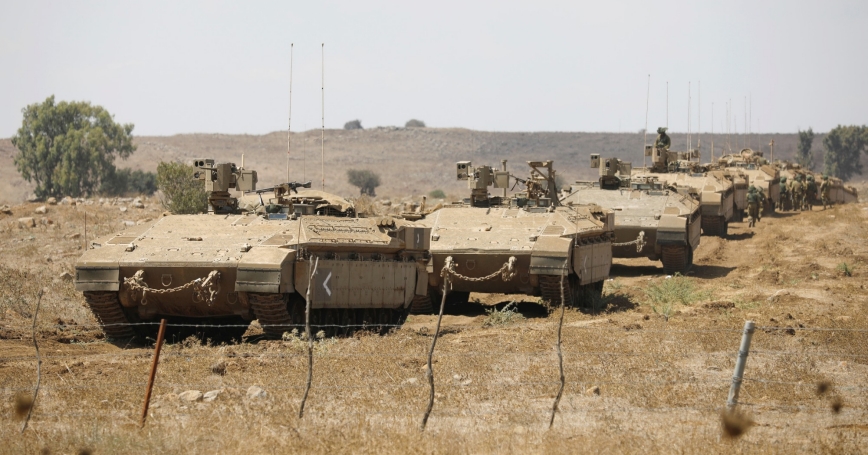 Escalating clashes between Israeli and Iranian forces in Syria have demonstrably increased the risk of a new, large-scale regional conflict that would likely involve the U.S. military. Tehran's continued provocations and violations of Israel's stated red lines are fueling an escalatory spiral that has the potential to rapidly spin out of control. The United States could move to forestall a new regional conflict by maintaining its military posture in Syria to buttress its primary objectives of rolling back Iranian malign influence in the Levant and preventing a resurgence of the Islamic State (ISIS). Otherwise, the United States risks being dragged into another Middle East conflict as it attempts to extract itself from the region.

Discussions of a potential U.S. withdrawal from Syria have coincided with increasingly frequent clashes between Israeli and Iranian forces in Syria. Israel has become increasingly aggressive in its strikes against Iranian and Iranian-backed militias in Syria—the Israeli Air Force (IAF) has conducted multiple strikes in the past two months alone. On July 24, Israel shot down a Syrian fighter which allegedly strayed into Israeli airspace over the Israeli-occupied Golan Heights, and on July 15, the IAF struck the Nairab airbase north of Aleppo, only four days after striking several Hezbollah and regime positions just across from the Golan Heights.

Additionally, the IAF reportedly conducted strikes on an Iranian command post near Albu Kamal on the Syria-Iraq border on June 17. The strike killed 52 militiamen, including fighters from the Iranian-backed Iraqi Kata'ib Hezbollah. These recent attacks demonstrate Israel's commitment to protecting its airspace, conducting long-range strikes against provocative Iranian military presence, and deterring Iranian-backed forces from establishing a presence along Israel's borders.

A Road to War?

Despite a steady string of altercations and provocations, neither Iran, its primary proxy Lebanese Hezbollah (LH), nor Israel appear to be seeking all-out war, at least for now. Iran has exercised a measure of restraint in its attacks, and Israel's responses have been intended to eliminate a specific threat and restore a measure of deterrence, not escalation. Moreover, Iran reportedly withdrew its forces in Syria 85 kilometers away from Israel's border to placate Israel; however, Prime Minister Benjamin Netanyahu asserted that Israel would not accept any Iranian presence in Syria. Additionally, Tehran's objective to establish a permanent military presence in Syria from which it can support LH and threaten Israel is wholly unacceptable to Jerusalem. Furthermore, Israeli attacks thus far have not deterred Iran, setting up an escalation logic that could be difficult to curtail.

Past Israeli conflicts, such as the 2006 Hezbollah War, reveal common signposts on Israel's “road to war,” in which a series of provocations prompted large-scale Israeli operations. Today, Israel's threat perception is much higher, as Tehran seems intent on pressing its perceived advantage in Syria and bolstering LH's precision strike capability with advanced weapons and an indigenous production capability. A robust precision targeting capability could be a game changer for LH, allowing it to hold vital Israeli infrastructure and population centers at risk with far fewer weapons due to increased accuracy.

A new war between Israel and LH that directly involves Iranian forces would potentially be far larger in scope and more destructive than the 2006 conflict. LH has a more-capable military, battle-hardened from years in Syria, and a rocket and missile force that can strike deep into Israeli territory.

Corresponding Israeli operations would involve wide-ranging air and land campaigns targeting LH positions throughout Lebanon. Operations would likely also bleed into southwest Syria, where Israel would seek to uproot Iranian-backed militias (PDF) before they can irreversibly entrench along the Golan. Finally, for Israel, the 2006 war ended inconclusively; thus, it almost certainly will aim to achieve a decisive battlefield victory by significantly degrading LH's military capabilities.

A large-scale conflict pitting Israel against Iran and its proxies would submerge the already war-torn region in a new wave of violence, potentially dragging the United States into another regional conflict.

The United States retains immediate interests in Syria, namely curtailing Iran's expanding power projection into the Levant and preventing a resurgence of ISIS. Russia and the United States have engaged in high-level discussions on Syria, but any agreement that calls for the withdrawal of U.S. forces but fails to secure concrete measures to reduce the military presence of Iran and its proxies and stop advanced weapons transfers to LH will likely only fuel further clashes and increase the risk of escalation.

While Russia may be interested in limiting the Iranian presence over the longer term, it has little interest in pressing for Iranian force withdrawals since both Moscow and Damascus are dependent on Iranian-backed militias to secure and hold territory. As such, neither the Syrian regime nor Russia are likely to acquiesce to U.S. and Israeli demands for the expulsion of Iranian-linked militias. Therefore, viewing any Russian proposition indicating it will secure the removal of Iranian and LH forces in Syria as genuine would be imprudent.

A premature U.S. withdrawal might only expand Iran's latitude for activities in Syria and provide an opportunity to entrench its presence throughout the country. The United States would be wise to avoid providing Iran with space in which to expand; increased Iranian military activities would likely provoke even more aggressive actions from Israel, pushing the region further towards the brink of war.

Moreover, an early withdrawal of U.S. forces would also likely create conditions for an ISIS resurgence. Following a U.S. withdrawal, it is likely the Kurdish-dominated Syrian Democratic Forces (SDF), currently partnered with Washington, would cut a deal with Damascus, ceding its majority Arab areas to the regime in exchange for increased autonomy in the northeastern Kurdish provinces. Many Sunni Arab communities reclaimed by Assad's forces have suffered regime retribution, and similar abuses might stoke anti-regime resentment, providing an opening for ISIS to reemerge in areas of its former caliphate.

To achieve a lasting defeat of ISIS, which might still have more than 12,000 fighters across Syria, the United States should continue coordinating with its SDF partner to maintain military pressure on the group. Moreover, U.S. entities such as USAID could continue working to foster vital societal reconciliation in liberated majority Arab areas by buttressing nascent local governance and empowering Arab communities. However, stabilization and governance initiatives might not be possible without direct U.S. engagement in post-ISIS areas.

Continuing to entertain the possibility of exchanging a withdrawal of U.S. forces for a near-term peace deal and a tentative agreement to limit the Iranian presence in Syria could be a mistake. The United States would be better off reaffirming its presence in Syria and maintaining its hard and soft power efforts to constrain Iran and reduce the risk of another large-scale and disastrous war in the Middle East.

Richard Baffa is a senior international/defense policy researcher at the nonprofit, nonpartisan RAND Corporation. Nathan Vest is a research assistant and Middle East specialist at RAND.