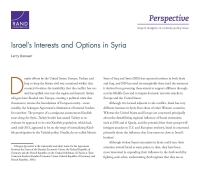 Israel's Interests and Options in Syria

With little ability to affect the outcome of the Syrian civil war, and with limited interest in intervening in the conflict other than to pre-empt or respond to attacks on its territory, Israel seems to have been a passive actor in recent events shaping the Levant. But Israel does have critical security interests that it seeks to advance in Syria — principally, minimizing Iranian and Russian influence in Syria, blocking the transfer of advanced weapons to Hezbollah, preventing Syria from posing a credible military threat to Israel or permitting Iran to do so, undermining the legitimacy of Syria's claims to the Golan Heights, and preventing Sunni militants from establishing infrastructure or operational bases along Israel's border. Unless and until the Syrian conflict dramatically changes course, Israel's strategy will likely be to monitor events carefully, work with Moscow to minimize the chances of inadvertent conflict with Russia, and take as few direct actions as are necessary to protect Israel's territory and citizens. Given the unpalatability of the most-likely "resolutions" to the conflict, continued fighting in Syria — a situation in which these various parties continue to focus their fire on each other rather than on Israel — might be the most advantageous outcome for Israel.

Israel Has Five Main Objectives in the Syrian Conflict

This research was conducted within the Intelligence Policy Center of the RAND National Defense Research Institute.