The Implications of U.S.-China Trade Tensions for Japan 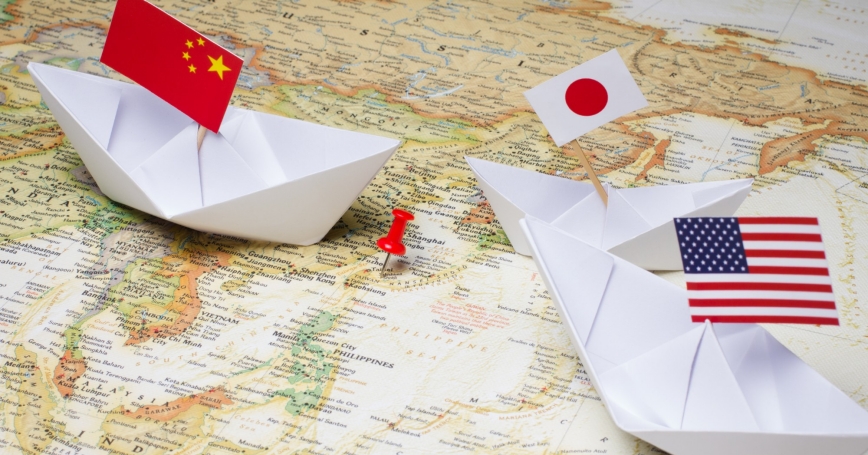 President Donald Trump announced new tariffs of 10 percent on $200 billion worth of Chinese exports, marking a significant escalation in economic tensions between Washington and Beijing (his administration had already imposed tariffs of 25 percent on $50 billion in goods from China) and casting further doubt on the possibility of a detente.

At the end of July, expressing cautious optimism that the two countries would find a way to accommodate one another, Apple CEO Tim Cook observed that there exists “an inescapable mutuality between the U.S. and China (such) that each country can only prosper if the other does. And, of course, the world needs both the U.S. and China to do well for the world to do well.”

Few observers would dispute Cook's second observation: given that Washington accounted for 24 percent of gross world product (GWP) last year, and China for 15 percent, a protracted downturn in either country would have serious ramifications for the global economy. Most analysts would also endorse his first proposition, concerning the inextricable linkages between their economies.

Unfortunately, though, both U.S. and Chinese policymakers increasingly appear to believe not only that they can unwind their trade interdependence over time, but also, more importantly, that they should, because contrary to what the term “trade war” would suggest, trade tensions between Washington and Beijing are less about deficit figures than about intensifying competition to master the commanding heights of frontier technologies.

While President Trump often expresses frustration over the size of America's trade deficit with China, it used to be far more pronounced, at least in relative terms: Beijing's current account surplus fell from a peak of 9.9 percent of its gross domestic product in 2007 to just 1.4 percent last year, and is projected to decrease further this year, to 1.2 percent.

Where the United States and China used to see that imbalance as an irritant in a largely constructive economic relationship, they are now questioning the underlying wisdom of that connection. The Trump administration contends that by facilitating China's integration into the postwar order, the United States has enabled Beijing to pursue with greater capacity and confidence a range of trading and investment practices that undermine globalization: requiring multinational companies to transfer their intellectual property to gain market access, conducting cyber espionage for commercial gain, and using economic coercion to secure deference to its strategic pursuits, for example.

It consequently regards China's technological progress as a growing threat to its national security. Chinese President Xi Jinping and his top advisors rejoin that the United States is undertaking to contain China, concluding that only by reducing its dependence on high-tech U.S. imports can Beijing achieve the ambitions it articulates in “Made in China 2025.”

In short, Washington and Beijing seem prepared to begin decoupling from one another economically, a conclusion that places Tokyo in a difficult position for at least four reasons.

First, Japan's growth depends significantly on the resilience of the complex supply chains that help structure—and are in turn shaped by—U.S.-China trade interdependence: Nikkei staff writer Moyuru Baba explains that “Japanese companies are especially vulnerable to a slump in trade, with many shipping materials and industrial equipment throughout the world. After the collapse of Lehman Brothers, none of the leading countries suffered as much as Japan in terms of the drop in industrial output.”

Second, Japan finds itself caught up in a sweeping recalibration of U.S. economic policy: the Trump administration's effort to reduce America's entanglement with China's economy is part of a far-reaching effort to reclaim the competitive advantages it believes the United States has squandered by joining multilateral trade pacts and acting through longstanding Bretton Woods institutions such as the World Trade Organization.

Third, fearful of the damage its economy could suffer as a result of U.S. protectionism and potentially protracted tit-for-tat retaliation between Washington and Beijing, Japan is experiencing an uncomfortable compulsion: to bolster economic cooperation with China, its principal rival in the Asia-Pacific region. Tokyo is working more proactively with Beijing to conclude negotiations over the Regional Comprehensive Economic Partnership, a 16-country arrangement that excludes the United States and would incorporate some 30 percent of GWP.

In addition, ahead of Prime Minister Shinzo Abe's probable visit to China next month, the two countries have established a committee to facilitate cooperation on developing overseas infrastructure; they are expected to work together on 20 to 30 projects, likely beginning with an over-$45 billion effort to link Thailand's three main airports through high-speed rail.

Beijing has hinted, though, that Tokyo should not take for granted this continued warming; following the release late last month of Japan's new defense white paper, which argues that China's military modernization is “generating strong security concerns in the region and international community,” Xinhua warned that “given the uncertainties now facing the global economy, Japan should also cherish the rapprochement of relations with China.”

As that veiled threat suggests, Tokyo's desire to strengthen economic ties with Beijing is tempered by continued concerns about the latter's vision for Asian-Pacific security. Defense Minister Itsunori Onodera warned earlier this month that China “is unilaterally escalating its military activities in the sea and aviation spaces around our country. This has become a significant concern for our country's defense.” Japan has also been touting its conception of a “free and open Indo-Pacific”—one that China rejects—assiduously increasing defense and diplomatic cooperation with like-minded countries in the region; just recently, for example, Tokyo and Delhi agreed to upgrade their regular “two-plus-two” dialogues from the vice-ministerial level to the ministerial level.

Fourth, Japan must contend with the prospect that economic competition between the United States and China could spill over into the security domain. I argued in a piece for Foreign Affairs' website last month that because trade interdependence is one of the few phenomena that have compelled the two countries to exercise mutual restraint, the weakening of that dynamic could lead Beijing to challenge U.S. national interests more forcefully.

One would expect it to do so most forcefully in its backyard, the Asia-Pacific, which is already coping with a significant security challenge in the continued progression of North Korea's nuclear and ballistic missile programs. Beyond further undercutting the Trump administration's “maximum pressure” campaign on Pyongyang, China could decide to accelerate its militarization of the South China Sea, through which roughly 21 percent of world trade flowed in 2016; contest more forcefully Japan's claims in the East China Sea; and increase preparations for an attack on Taiwan.

Security tensions might even extend beyond the region; Beijing could, for example, move to intensify its alignment with Moscow, not only to push back more strongly against U.S. foreign policy in the Middle East and Eastern Europe, but also to pose a more concerted, holistic challenge to the U.S.-led postwar order.

If, as seems plausible, we are in the early stages of a long unwinding between the U.S. and Chinese economies, Japan may have to devise new strategies not only for sustaining its growth, but also for insulating itself from the impact of deteriorating relations between Washington and Beijing.

This commentary originally appeared on Kyodo News on September 18, 2018. Commentary gives RAND researchers a platform to convey insights based on their professional expertise and often on their peer-reviewed research and analysis.