The Risks of Permanent War 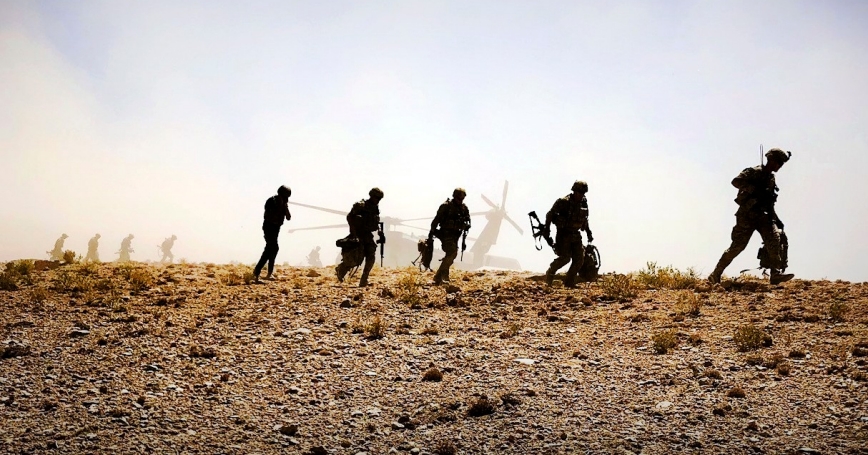 Soldiers set off for a foot patrol after disembarking from a UH-60 Black Hawk helicopter in Afghanistan, September 4, 2018

In a widely shared opinion piece published in the New York Times on September 11th, U.S. Army veteran Joe Quinn observed that for “the past 17 years in Afghanistan, we've tried everything: a light footprint, a big footprint, conventional war, counterinsurgency, counter-corruption, surges, drawdowns.” Despite having lost some 2,200 soldiers and expended some $840 billion in pursuing these various approaches, the United States has been unable to do more than sustain a stalemate with the Taliban, which presently controls about as much territory as it did immediately prior to America's intervention in 2001. Indeed, the evidence suggests that the Taliban is not only maintaining its net level of control, but also becoming a more capable foe. Jason Lyall, an associate professor of political science at Yale University, noted last month that while Afghan forces “are beset by high desertion rates, low morale, and rampant corruption,” the Taliban “appears better-equipped and more tactically savvy than ever before.”

Some observers suggest that the U.S. will undermine its credibility if it withdraws from Afghanistan now, before accomplishing its objective. That objective, however, has proven difficult to discern, for it has changed over the years. Journalist Steve Coll argued at the beginning of the year that “American war aims in Afghanistan have been, and remain, riddled with contradictions and illusions,” such that three presidents have “offered convoluted, incomplete, or unconvincing answers to essential questions: Why are we in Afghanistan? What interests justify our sacrifices? How will the war end?” If the U.S. finds it challenging to answer such questions after nearly two decades, the coming years are unlikely to furnish additional clarity. The war in Afghanistan nonetheless persists; it has gone on for long enough, in fact, that some U.S. soldiers serving there have parents who fought in the same conflict.

While many observers use “forever war” to describe America's intervention in Afghanistan, the term increasingly, and concerningly, seems to characterize a core component of U.S. foreign policy.

Even if one were to accept that the U.S. would undercut its credibility by drawing down it forces from Afghanistan, one might consider a corollary proposition: namely, that the U.S. erodes its credibility at least as much by allowing inertia to drive policy, by overstating the ability of military force to effect political outcomes, and by conflating action with accomplishment. This judgment applies beyond Kabul. While many observers use “forever war” to describe America's intervention in Afghanistan, the term increasingly, and concerningly, seems to characterize a core component of U.S. foreign policy. A U.S. Army spokesperson stated last month that U.S. forces will stay “as long as needed” in Iraq to stabilize areas that were once under the Islamic State's control. In Syria, meanwhile, the Trump administration has apparently broadened its objectives “to include the exit of all Iranian military and proxy forces from Syria, and establishment of a stable, nonthreatening government acceptable to all Syrians and the international community.” National Security Advisor John Bolton made the point forcefully on Monday, stating that U.S. forces would not leave “as long as Iranian troops are outside Iranian borders, and that includes Iranian proxies and militias.” The Brookings Institution's Michael O'Hanlon observes that America's wars in the Middle East “cost more than $30 billion a year, on top of the $600 billion-plus core defense budget. It's a huge, expensive effort, and there's no end in sight.”

Less noted, though, is that the U.S. seems to have resigned itself to interminable war not only in the Middle East, but also well outside the region. It is expanding its campaign of drone strikes in Africa and fighting terrorist organizations in at least 14 countries, and it has special operations forces deployed in nearly three-quarters of the world's countries. The chief of the Air Force's Air Combat Command warned last November, moreover, that the U.S. may need to countenance “infinite war: longtime competition against peer adversaries.”

The University of Minnesota's Tanisha Fazal and Cornell University's Sarah Kreps offer four reasons why the movement towards permanent war has not elicited as much pushback from the American public as one might expect. First, because the government increasingly conducts wars informally, outside of the realm of formal laws, they tend to receive less attention. Second, fewer and fewer Americans relative to the overall population have experienced the physical costs of war. Third, the ratio of Americans killed in war to those who have been wounded continues to fall. And fourth, warfighting costs are tacked onto the national debt, meaning that Americans do not experience their financial impact as directly as they did in prior decades. Fazal and Kreps warn that because “these changes—legal, civil-military, and financial—are unlikely to reverse themselves anytime soon,” permanent war could prove to be “not the exception but the rule.” Data lends credence to their judgment: the Washington Post reports that the Pentagon's 2019 base budget “will be the biggest in recent American history since at least the 1970s, adjusting for inflation.”

The trouble is that continuous war violates a core precept of strategy, which, at least as presently understood, involves the relation of means and ways to defined ends, not indefinite pursuits. If a campaign has no end, it can have no objective; if it has no objective, it cannot be won. The more powerful the actor is that undertakes such an effort, the longer it can elide this certitude. Eventually, though, the momentum of inertia encounters the limitations of power. Consider Michael Phelps, arguably the greatest swimmer of all time; even he could not “win” were he tasked with swimming an infinite number of laps. While his endurance might well allow him to complete far more laps than anyone else who undertook the effort, he, too, would eventually succumb to exhaustion.

The results of America's recent interventions should give it pause as it contemplates fighting in perpetuity. After 17 years of exertion in Afghanistan, the U.S. is mired in a war of attrition. By intervening in Iraq, it helped spawn the very organization, the Islamic State, whose mutations threaten to tie down U.S. forces indefinitely in Iraq and Syria. And by helping to overthrow Muammar Qaddafi, the U.S. created an opening for both the Islamic State and al-Qaeda to reconstitute in Libya. Given this record, it is not surprising that the Chicago Council on Global Affairs finds (PDF) that millennial Americans “are significantly less supportive of the use of military force, defense spending, and other forms of militant internationalism” than older ones.

There are at least three sets of questions that policymakers, scholars, and members of the public might consider:

If permanent war is indeed a fait accompli, it merits deep discussion and debate that involve all elements of American society.

This commentary originally appeared on Just Security on September 26, 2018. Commentary gives RAND researchers a platform to convey insights based on their professional expertise and often on their peer-reviewed research and analysis.