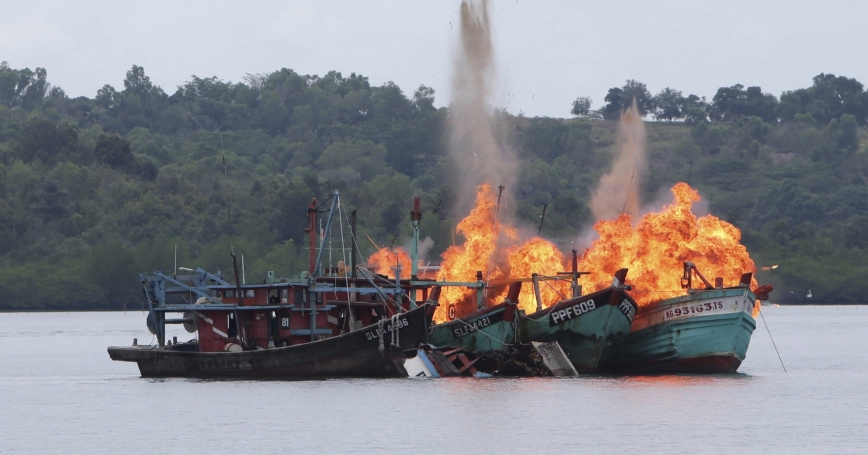 The Republic of Indonesia is a nation of approximately 250 million people spread over some 17,000 islands that total a land area of 733,594 square miles (1,811,569 square kilometers), making it the largest and most heavily populated archipelagic country in the world. Indonesia's total sea area, including claimed exclusive economic zones (EEZs), is four times greater than its land area, encompassing 553,244 square nautical miles (7.9 million square kilometers)—of which nearly 27,080 square nautical miles (93,000 square kilometers) are internal, archipelagic waters, according to The World Factbook and the U.S. Library of Congress.

The hard facts of Indonesia's maritime geography provide both opportunity and challenges. On the one hand, this maritime landscape has pushed policymakers to provide strategic guidelines to empower and leverage Indonesia's maritime economy, as President Joko Widodo (Jokowi) did in 2014 with his Global Maritime Fulcrum (GMF) concept. The GMF sought, among other things, to re-cast Indonesia as a country whose prosperity both derives from and is reliant upon the maritime arena—namely trade, fishing, and natural resources such as oil and natural gas. Jokowi's enunciation of a maritime strategy was a much-welcomed policy manifestation of the deeply ingrained values and identity of the citizens of Indonesia as members of a proud and independent maritime nation.

At the same time, Indonesia has been slow to invest in the resources necessary to exploit and protect the abundant living and non-living maritime resources at its disposal. The 2016 World Bank Logistics Performance ranked Indonesia's port infrastructure as one of the worst in Southeast Asia, for example. Such a lack of connectivity between islands has undermined the country's overall development. But Indonesia faces perhaps a larger problem. Indonesian waters—which comprise two-thirds of the country's sovereign territory—create large ungoverned spaces for illegal activities to flourish, such as foreign illegal fishing, piracy, smuggling, and illegal immigration. Some reports, for example, estimate that illegal, unreported, and unregulated (IUU) fishing costs Indonesia over $3 billion a year in lost income.

For the most part, Indonesia has struggled to adequately patrol and secure its maritime space. The map below highlights seven key sea lines of communication (SLOCs) that Indonesian authorities have identified as priority areas where illegal activity is occurring.

Yet for decades Indonesia maritime law enforcement (MLE) and naval forces have lacked sufficient resources to patrol these areas of concern and to eradicate unlawful behavior.

My co-authored RAND report found, however, that Indonesian authorities have made tangible efforts to address the myriad threats emanating from their maritime domain in recent years. This has involved a multi-pronged approach. First, the executive branch has issued a series of policy documents, such as the GMF, outlining a rationale for reorienting Indonesia toward a focus on maritime security and trade. Second, Indonesia has established or enhanced various coordinating ministries, MLE agencies, and special task forces, such as the Indonesian Maritime Security Agency (BAKAMLA) and the Indonesian Presidential Task Force to Combat Illegal Fishing (SATGAS 115), specifically designed to address issues of maritime concern. Finally, as of 2017, Indonesia has begun to invest in infrastructure development and procurement of additional maritime security capabilities to deal with maritime threats and capacity constraints.

Shortly after taking office, Jokowi created an executive coordinating body for maritime issues called the Coordinating Ministry for Maritime Affairs (Kementerian Koordinator Bidang Kemaritiman). Its primary function is to oversee the various maritime programs across ministries within the Indonesia government and synchronize policies. Figure 2 illustrates just a few of the multitude of agencies and ministries in charge of maritime security within Indonesia that our report examined. The Coordinating Ministry, however, plays a unique role within the bureaucracy by interacting closely with the president and several key ministries and task forces within the hierarchy. 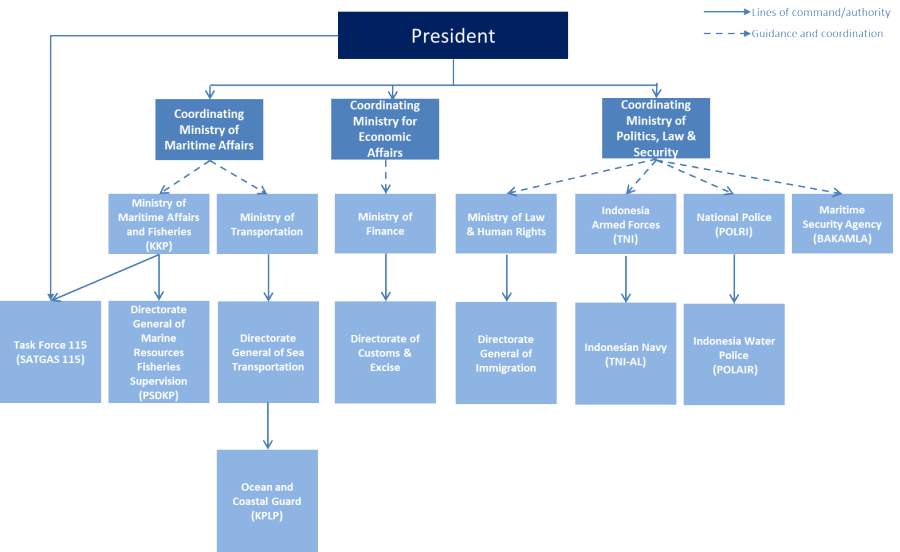 Administered under the Ministry of Marine Affairs and Fisheries (KKP) portfolio, SATGAS 115 seeks to strengthen administrative and legal sanctions against illegal fishing in Indonesian waters. For example, the Task Force has thus far revoked 291 licenses, suspended 261 licenses and issued 48 warning letters since its establishment.

BAKAMLA is a new coordinating MLE agency set up to utilize assets and personnel from other MLE agencies and naval counterparts in a joint task force arrangement to monitor, detain, inspect, and work with the proper legal authorities to prosecute violations of Indonesian maritime law. Another important function of BAKAMLA is synergizing information and intelligence across MLE agencies within Indonesia. While BAKAMLA may one day become Indonesia's answer to a unified coast guard, its mandate is circumscribed as “coordinating body” and thus lacks the authority to order or command all the other MLE agencies to serve BAKAMLA's needs. Its legal status does not supersede or abolish previous laws and authorities of other MLE agencies. As a result, it must work cooperatively with other agencies to carry out its mission, similar to its previous incarnation, BAKORKAMLA. Despite these constraints, both SATGAS 115 and BAKAMLA have leveraged increased regulatory and legal powers to more aggressively combat maritime security threats, including plans to increase the number of personnel and fleet size of BAKAMLA over the next several years.

Since assuming her portfolio, KKP Minister Susi Pudjiastuti has moved swiftly to introduce a range of measures aimed at reforming the fisheries sector. She declared a six-month moratorium in 2014 on issuing fishing licenses to vessels over 30 gross tons in a bid to rein in a bloated and under-regulated fishing industry. During the moratorium, officials discovered a sophisticated operation of illegal fishing operations, with boats disguising ownership, falsifying Indonesian fishing permits, using permits for multiple boats, and carrying flags from multiple countries in order to evade Indonesian laws. In an effort to conserve fishery resources, Susi banned the use of destructive trawl and seine nets in Indonesian waters. Finally, Susi has embarked on a highly publicized program of sinking foreign illegal fishing vessels. According to SATGAS 115 special advisor Mas Achmad Santosa, 363 illegal fishing vessels have been sunk with dynamite since the program began. As a result of these policies, fishing stocks in Indonesian waters have more than doubled from 2013 to 2017, according to Indonesian government statistics.

In conclusion, despite a daunting set of maritime challenges, Indonesia has placed renewed emphasis on maritime security governance. It has done so by unveiling new policy guidelines, including the GMF proposal, issuing new regulatory, administrative and legal changes to its maritime policy to enable it to better manage its expansive maritime space, and new investments in infrastructure to monitor its maritime space. While the programs in place may take decades to bear fruit, Indonesia is on the path to securing the waterways and infrastructure so key to its overall economic development.

Lyle J. Morris is a senior policy analyst at the RAND Corporation, where he focuses on security developments in East and Southeast Asia. He has over ten years of experience researching and leading projects on Asia-Pacific security issues and has published recently on maritime security in the Asia-Pacific, U.S. maritime security capacity building in Southeast Asia, Chinese military modernization, and Chinese engagement in Africa.

This commentary originally appeared on Asia Maritime Transparency Initiative on October 11, 2018. Commentary gives RAND researchers a platform to convey insights based on their professional expertise and often on their peer-reviewed research and analysis.