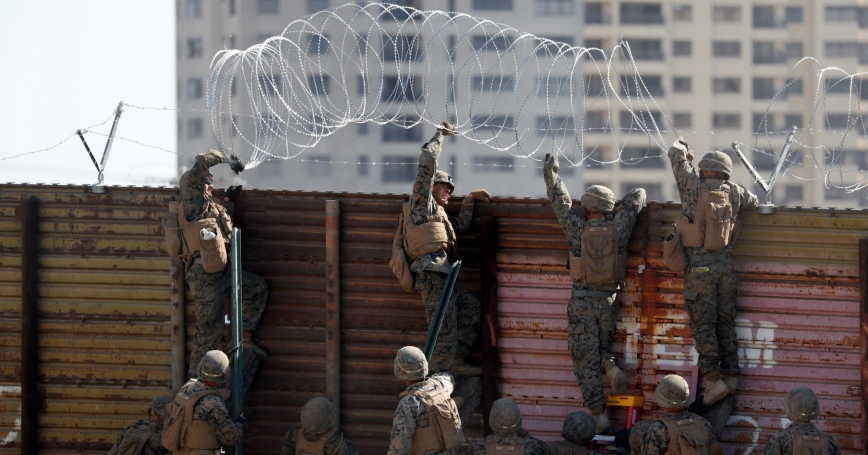 U.S. Marines install concertina wire along the top of the primary border wall at the port of entry next to Tijuana, Mexico, in San Ysidro, San Diego, California, November 9, 2018

This commentary originally appeared on The Cipher Brief, an in-depth, expert-driven, digital news site. A membership to The Cipher Brief provides ongoing access to analysis and featured columns from any computer or device.

President Trump's decision to deploy at least 5,200 active-duty troops to the U.S. southern border is getting considerable attention, generating many headlines and sharply-worded tweets on both sides. President Trump isn't the first president in recent times to send the military to the border—President George W. Bush and President Obama also sent the military to the border, and their decisions at the time also had political overtones. Part of the reason that President Trump's decision stands out compared to those of his predecessors is the size of the deployment, the use of active-duty troops rather than the National Guard, questions around the degree of threat the migrant caravans actually pose, and the timing of the deployment, coming just days before a heated and heavily contested midterm election.

Since the Revolution, Americans have preferred to draw a bright line between military missions and police functions. Congress passed the Posse Comitatus Act in 1878, prohibiting the U.S. military from performing domestic law enforcement activities. In more recent years, as concerns over illegal immigration and drug-trafficking at the southern border have grown, the Department of Defense has sought to avoid militarizing the border, particularly after a U.S. Marine on a counter-narcotics mission in May 1997 accidentally shot and killed a teenage boy, Ezequiel Hernandez Jr., who was herding goats along the Rio Grande river.

When President Bush sent the National Guard to the southwest border from 2006 to 2008 as part of Operation Jump Start, the reason for its deployment was to free up Customs and Border Protection (CBP) manpower so that CBP could focus on hiring and training new agents, as CBP strove to double in size to about 18,000 officers. President Obama deployed the National Guard to the southwest border in May 2010, two months after an Arizona rancher was killed and as political tensions around illegal immigration and drug trafficking were rising. The National Guard soldiers were there to provide intelligence, surveillance, and reconnaissance, and counter-narcotics enforcement, and once again were explicitly provided as a one-year bridge to enable CBP to recruit and train additional agents.

Under all three presidential administrations, the deployments were the result of a request for assistance from the Department of Homeland Security (DHS) to the Department of Defense (DoD). To ask for assistance from DoD, the secretary of homeland security sends a formal request letter, asking for specific military capabilities that DHS thinks it needs for the mission. DoD evaluates the request, and determines what specific units or military platforms are best suited to provide the requested capabilities and whether it can legally provide those capabilities. For this latest mission, CNN reported that DHS's initial submission to DoD included a request for units that could provide “crowd and traffic control,” but DoD rejected that part of the request because the department saw those functions as law enforcement activities. Part of determining what units can best provide requested capabilities is determining whether those capabilities will come from the active or reserve component of the U.S. military. In some cases, desired capabilities may reside only in the active component, such as the specialized engineering skills provided by the Army Corps of Engineers. In other cases, the requested capabilities may also be available in the federal reserve or National Guard. Unlike active-duty military personnel, National Guard personnel are allowed to perform law enforcement functions inside the United States, which has often made them a better fit for border security deployments.

It is not entirely clear why DoD is relying on active-duty troops rather than National Guard personnel for Operation Faithful Patriot. One possible reason is that not all of the requested capabilities DHS has asked for are available in the Guard. DoD is providing DHS with combat engineering battalions to build barrier walls, military planners to integrate command and control, and medium lift helicopters equipped with night vision capabilities to help with surveillance, transportation of CBP agents, and medical evacuation if needed. DoD is also providing strategic airlift, deployable medical units, and logistics units. Some of these capabilities may reside only in the active component. Another reason DoD may be using active-duty personnel is they can usually deploy faster than reserve component personnel. Congress requires DoD to give National Guard and reserve personnel at least 180 days advance notice of deployments to minimize the disruption of deployments on their families and civilian employers. This requirement can be waived by the secretary of defense, but given the urgency President Trump has placed on this mission, the secretary of defense may have decided active-duty personnel could move to the border more quickly.

News of the border deployment has also generated many questions about what will be the rules of engagement for military personnel, particularly after President Trump seemed to indicate that soldiers would be able to use lethal force against migrants throwing rocks. Under criticism, the President has backed away from this comment, but there is still unease about the role of the military at the border. Speaking to reporters last week, Commander of U.S. Northern Command General T.J. O'Shaughnessy, who is in charge of the U.S. military at the southern border, indicated that CBP would be handling the migrants but that the military had to be prepared for “incidental interaction” with them, and that soldiers and Marines would be trained for that possibility. General O'Shaughnessy emphasized that military personnel would be trained to the same standards as CBP, reflecting a key lesson learned from the Hernandez incident, which concluded that there was insufficient preparation and training for the mission. Secretary James Mattis, a Marine himself, undoubtedly wants to minimize the possibility that any “incidental interaction” goes wrong, whether with migrants at the border, or with members of citizen militias, who seem to be mobilizing on their own, further complicating an already complex landscape.

Regardless of questions about active-duty troops versus the National Guard, or Posse Comitatus and rules of engagement, an underlying question about Operation Faithful Patriot is whether a military response of such size is needed to address the situation on the southern border. CBP already has several hundred trained agents at the border, with two dozen air assets for surveillance and mobile response. As part of Operational Guardian Support, there are also already more than 2,000 National Guard soldiers there. Although General O' Shaughnessy pushed back against press reports of as many as 14,000 military personnel going to the border, he stated clearly that DoD would be sending more than just 5,200 troops. What are all these military personnel confronting at the southern border?

In past years, few of the migrants who start the caravan journey get all the way to U.S. ports of entry. A late October briefing by U.S. Army North, the land component of U.S. Northern Command, reported that there were four migrant caravans with a total of about 7,000 unarmed migrants, many of them women and children, making their way through Mexico. U.S. Army North estimates that only 20 percent of these migrants—1,400 people—are expected to make it to the border. It is not clear why a 45-day deployment of at least 5,200 active-duty military personnel on top of other assets already there is needed to handle this number of migrants, but it is clear that it will cost DoD millions of dollars, divert soldiers and Marines from training for their warfighting missions at a time when there are significant readiness concerns, and thrust military personnel and their leaders squarely into the middle of an intensely political, divisive issue. That is not where the U.S. military should be.

Christine Wormuth is director of the International Security and Defense Policy Center at the nonprofit, nonpartisan RAND Corporation. She is a former under secretary of defense for policy.

This commentary originally appeared on The Cipher Brief on November 16, 2018. Commentary gives RAND researchers a platform to convey insights based on their professional expertise and often on their peer-reviewed research and analysis.