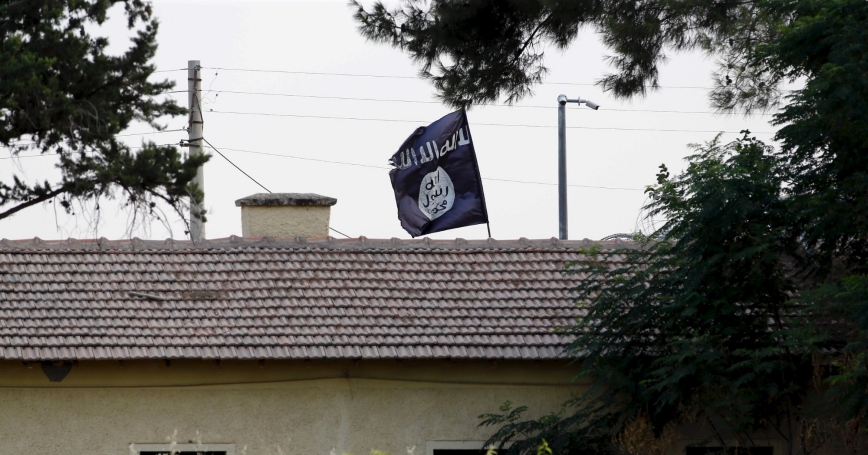 An Islamic State flag flies over the custom office of Syria's Jarablus border gate near the Turkish town of Karkamis, in Gaziantep province, Turkey, August 1, 2015

Despite nearly two decades of a global counter-terrorism campaign waged by the United States and its allies, there may now be four times as many Salafi jihadist fighters as there were on September 11, 2001. The total number is currently estimated at 230,000 militants spread across approximately 70 countries, with the lion's share currently located in Syria, Afghanistan and Pakistan. The spike in numbers comes at the same time that the Islamic State's (IS) caliphate has collapsed in Iraq and Syria. The group now only claims a mere one percent of the territory it once controlled at its peak in 2014-2015. These numbers suggest that despite the decline of the so-called caliphate, the global jihadist movement is alive and well, even if it is currently more fractured and atomised than at any point in recent memory. The question many are left wondering, however, is what does this mean for the future of al-Qaeda and IS?

This Perspective lays out several possible outcomes for the future of al-Qaeda and IS as laid out below. These contextual scenarios assess the relative strength and weakness of each group and suggest a myriad of factors that might impact the relative likelihood of each particular scenario. It should be noted that in each of the scenarios described below, the groups remain as separate entities, but that does not entirely rule out occasional and pragmatic cooperation in specific regions at various times. However, such cooperation would not signal anything close to reunification of the two groups.

In this scenario, both Al Qaeda and IS are at increased strength. This could result from any number of real-world developments, including a retrenched Western posture in the Middle East, North Africa, and South Asia. A diminished Western presence could also result in a change of priorities for jihadists, who may feel more inclined to target the 'near enemy' of local 'apostate' regimes in the region. This scenario would see an expansion of the current wave of jihadist terrorism and could breathe new life into the global jihadist movement as a whole.

Over the past two decades, there have been several times when analysts have predicted the demise of the movement, namely, almost immediately after the United States declared its global war on terrorism; again, following the death of Osama bin Laden; and more recently, following the recapture of the Islamic State's strongholds in Mosul and Raqqa and the destruction of its state building project. However, the global jihadist movement is a transnational social movement comprised of organisations, networks, cells, and individuals. It is held together largely by a shared narrative that stresses the ummah continues to face a sustained and relentless attack from the West on multiple fronts (political, religious, military).

Rather than view the end of the caliphate as the beginning of the end of the movement, some see its establishment in the first place as proof of life, given the destructive energy it produced, luring vast numbers of people from around the world to travel to the caliphate and join IS. Both Al Qaeda and IS could take advantage of potential exogenous shocks to the system, such as another global financial crisis, which, in a world of finite resources, would directly impact nation-states' ability to counter these groups. Predatory insurgent organisations feast on the carcasses of states where civil wars have ravaged institutions and bureaucracies, which are the official organs of state power projection and legitimacy. Jihadist groups flourish in regions of the world characterised by state failure, lack of good governance, inability to establish widespread rule of law, weak security services, and high levels of corruption. All these conducive factors are abundantly present in the Middle East.

Another possible future of the global jihadist movement is retrenchment, dissipation, and a move toward increasing irrelevance. In response to the establishment of the caliphate, the pendulum could swing back in the other direction because of the substantive counter-terrorism efforts and measures of states. States are moving to harden borders, increasing information-sharing and cooperation between intelligence services, and accelerating advances in technology that favour counter-terrorism efforts. The use of biometrics and the integration of artificial intelligence into the targeting process could help Western militaries be both more effective and discerning in their hunt of terrorist leaders hiding in austere terrain. Another facet of this future potentiality is that the narrative crafted by the Islamic State and similar groups could fail to resonate with future generations and be exposed as bankrupt and contradictory. This scenario is embodied by a shift in the threat landscape where dangers posed by terrorist groups persist, but the gravest concerns to international security are manifested in nation-states and great power rivalries, not non-state actors. Furthermore, the threat of major combat between well-equipped nation-states could make proxy conflicts less likely, as states generally seek to avoid escalatory actions that could lead to war.

A scenario in which Al Qaeda is ascendant and the Islamic State falters could result from an increase in external support to the former and increasing isolation of the latter. The percolating conflict between Sunni and Shia powers, represented by the bitter feud between Saudi Arabia and Iran, respectively, could lead some Sunni powers to become more tolerant of Al Qaeda and even sponsor it as proxy forces. Al Qaeda would be well-positioned to receive this type of support since it has worked diligently to refashion its image as a more moderate entity since the Arab Spring. IS is still considered too extreme by most of the Muslim world, including for many nation-states that have supported jihadist groups in the past. There is no evidence to suggest that IS has ever received support from states, even not from some of the more hardline boosters of Salafism throughout the Gulf. If Al Qaeda gets involved in certain conflicts that are both seminal and highly symbolic, like Kashmir, it could further burnish its image as the real vanguard of Islamist rebels committed to defending Muslims.

Further, if Al Qaeda focuses its resources on striking the West, and is able to do so successfully, this may provide the momentum necessary to supplant IS as the leader of the global jihadist movement, and even poach IS fighters as it has done already in parts of the Middle East and Africa. Al Qaeda certainly possesses the capability to capitalize upon IS' potential missteps and has already gone to great lengths to reframe its strategy as one aimed at garnering local support and parroting grievances held by communities at local levels.

This scenario predicts the demise of Al Qaeda while the Islamic State rebounds and flourishes, in a replay of the situation during the period between 2014 and 2016. During this time, IS was ascendant and Al Qaeda was caught flat-footed. Zawahiri's organization failed to anticipate the events surrounding the Arab Spring and then responded in a sclerotic manner, as other groups took advantage of the power vacuum to promote their own agendas and ideologies. Ultimately, Al Qaeda benefited from the chaos that resulted from the Arab Spring, but continued success is far from certain. There is a high probability that IS will indeed reconstitute itself and will almost certainly do so in Iraq and Syria, in addition to other potential locations. But the question is, to what extent does IS rebound and can it once again be in a position to reclaim its previous territorial control? Losing the physical caliphate may tarnish its brand in the eyes of some, but the fact that it was able to successfully establish a caliphate in the first place will remain a viable propaganda tool for the group to recruit new members and lift the morale of the global jihadist movement as a whole.

It remains doubtful that the international community, having once been so negligent, would take as long to organise and mobilise again should the group attempt to rebuild a state. The memories of past atrocities are still too fresh. But most of all, for the countries most affected by the rise of IS—those in the region and others in the West where foreign terrorist fighters and their families are now attempting to return home to—the terror and instability conjured by the Islamic State is still quite palpable. In fact, the pivotal timeframe that could engender this scenario is 2017-2018. It is the period when the caliphate was decimated and Al Qaeda's strategy to “quietly and patiently rebuild” took shape. The result could be that Al Qaeda is temporarily perceived as the most concerning target for Western counter-terrorism forces, which once again attack Al Qaeda wherever it coalesces. This would elevate IS by default, as its fighters seek and are then better positioned to quietly and patiently rebuild in their own right with the bulk of counter-terrorism efforts diverted elsewhere.

The challenge in thinking through these scenarios is attributing a likelihood or percentage to each, attempting to weight various factors as to which are most likely to occur and impact the relative standing of IS and Al Qaeda as transnational organizations, while also taking into consideration the myriad local affiliations, offshoots, and franchises that each group maintains. Some scholars like Barak Mendelsohn foresee a requiem for jihadism, observing what he has called the “aggregation problem,” or these groups' inability to translate local victories to have transnational impact. Still others, including Seth Jones, have noted the sheer numbers of Salafi-jihadists while suggesting that it would be a grave mistake to declare victory prematurely against the terrorist threat. My own view is that both of these observations can be true: Salafi jihadist organisations can still struggle to mobilise a sustained transnational campaign of violence, while the numbers of fighters committed to this ideology continue to grow.

The future of the global jihadist movement is therefore likely to resemble its past, with peripatetic and divided groups of militants dispersing to new battlefields, from North Africa to Southeast Asia. There they will join existing civil wars, establish safe havens and sanctuaries, and seek ways of conducting spectacular attacks in the West that inspire new followers. In this fragmented and atomised form, IS could become even more dangerous and challenging for counterterrorism forces, as its splinter groups threaten renewed and heightened violence throughout the globe. Even if foreign fighters return home in much smaller numbers than initially expected, the next five-year period could very well be characterised by a spike in attacks.

This Perspective was published alongside a public ICCT lecture given by Colin P. Clarke on 11 December 2018 in The Hague

Colin P. Clarke is an associate fellow at the International Centre for Counter-Terrorism—The Hague (ICCT), a senior research fellow at The Soufan Center, and an adjunct senior political scientist at the nonprofit, nonpartisan RAND Corporation. This Perspective is adapted from his forthcoming book, “After the Caliphate: The Islamic State and the Future Terrorist Diaspora,” scheduled to be released in spring 2019 by Polity Press.

This commentary originally appeared on International Centre for Counter-Terrorism​ (ICCT) on December 11, 2018. Commentary gives RAND researchers a platform to convey insights based on their professional expertise and often on their peer-reviewed research and analysis.