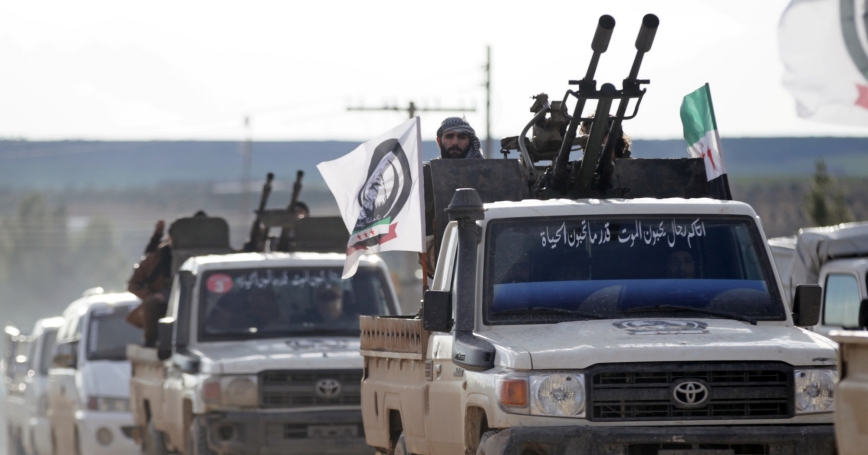 President Donald Trump's plan to withdraw U.S. troops from Syria means that the United States is relying on Turkey to shoulder the burden of countering the Islamic State. This move will provide the terrorist group with an opportunity to revive itself at a critical stage in the fight.

Trump claims exiting Syria has been his plan all along. Still, many U.S. policymakers, including those in Congress, were caught by surprise—especially given the September assertion by Trump's national security advisor, John Bolton, that U.S. troops would remain in Syria until the Iranians left.

When Trump announced his surprising about-face on what had been the closest thing Washington had to a Syria policy—the presence of 2,000 or so U.S. troops and support for Kurdish militia forces—he did so after a conversation with Turkish President Recep Tayyip Erdogan. Shortly after the phone call, Trump tweeted, “Now ISIS is largely defeated and other local countries, including Turkey, should be able to easily take care of whatever remains.” He went on to add that the Turkish leader “has very strongly informed me that he will eradicate whatever is left of ISIS in Syria.”

Ankara has often demonstrated a reluctance to take on the Islamic State directly, preferring instead to focus its energy and resources on countering the Kurds and Erdogan's opposition.

Apart from taking Turkish talking points at face value, there is a fundamental problem with this calculation. Ankara has often demonstrated a reluctance to take on the Islamic State directly, preferring instead to focus its energy and resources on countering the Kurds and Erdogan's opposition. For years, Turkey has been playing a double game. Erdogan's main objective is to prevent Syrian Kurds from consolidating more territory and establishing a corridor parallel to the southern Turkish border. Eradicating the Islamic State's presence in Syria—and its networks within Turkey—is a secondary priority that has often been ignored entirely.

Yet, because the Islamic State has already established a nascent infrastructure in Turkey, the recent policy decision to withdraw from Syria could breathe new life into the group, endangering Turkish soldiers and civilians at home and allowing the group to make a comeback in Syria.

Turkey's borders remain far from impenetrable, and the Islamic State's leaders recognize the importance of a robust logistics capability. Syria is the conflict zone that provides the Islamic State with operational space, but Turkey—with modern communications, transportation, and links to the global economy—is close to an ideal country for a terrorist group to take advantage of, akin to a rear supply base or logistical hub. Its security and intelligence services possess finite resources, which remain primarily geared toward fighting the Kurdistan Workers' Party (PKK), a group Turkey knows well and has been combating for nearly four decades.

One of Erdogan's main arguments, and a point of contention between Ankara and Washington since the beginning of U.S. involvement in Syria, is that the People's Protection Units (YPG), a Kurdish militia and the most effective fighting force in the broader anti-Islamic State coalition, is an extension of the PKK. Since the United States was backing the YPG as the main element of the Syrian Democratic Forces (SDF), the argument goes, it was essentially sponsoring terrorism. This message resonates with Erdogan's supporters, but because the YPG was the most effective bulwark against the Islamic State, the United States is far less sympathetic to this characterization.

Relying heavily on Erdogan presents a problem regarding both capability and intent across two dimensions: fighting the Islamic State on the battlefield in Syria and stamping out Islamic State networks and small cells of militants already entrenched in Turkey. Following high-profile attacks in Ankara, Istanbul, and Gaziantep over the past several years, the Islamic State has demonstrated its reach and operational capability.

In terms of fighting the Islamic State in Syria, Turkey boasts a formidable military—on paper, at least. But even with the Islamic State cornered in small towns and villages along the central Euphrates River valley, the United States was unable to completely eradicate the remnants of the group. So why does Trump think the Turks will be able to achieve this objective? The U.S. withdrawal comes amid a flurry of reports that the Islamic State is hunkering down for a long fight and preparing to wage a guerilla insurgency in the Sunni heartland of eastern Syria.

It will be especially difficult to fight the Islamic State at a time when the leadership of the Turkish security forces has been gutted.

It will be especially difficult to fight the Islamic State at a time when the leadership of the Turkish security forces has been gutted. In late 2013, Turkey launched an anti-corruption probe, which was accelerated following a coup attempt in July 2016. The instability has led to command-and-control issues and fissures among pockets of military and intelligence leadership. The Turkish government purged hundreds of thousands of public servants across the country, including police, military officers, prosecutors, and judges. As a result, the state was left with an inexperienced and poorly trained counterterrorism and intelligence staff that is often plagued by serious operational flaws and prone to human right abuses.

Instead of taking a more comprehensive approach, Erdogan's security policy has been one of either/or, with respect to fighting the Kurds and the Islamic State. The political will on the part of the Turkish government to wholeheartedly confront the Islamic State has been conspicuously lacking, which is somewhat vexing given operations launched by the Islamic State on Turkish soil. These include major attacks like the June 2016 Ataturk Airport incident in Istanbul or the assault on the Reina nightclub in January 2017. Ostensibly, Turkey should have a vested interest in uprooting a terrorist group from its territory. But in the Middle East, the enemy of one's enemy is still too often seen as a friend, so the Islamic State was viewed as a source of “strategic depth” against the Kurds, similar to the manner in which Pakistan's Inter-Services Intelligence and military rely on the Taliban, despite attacks that have been directed against Pakistani personnel. This is merely viewed as the cost of doing business in a dangerous region.

There may also be a sectarian angle at work, as the Islamic State was fighting the Bashar al-Assad regime, a symbol of Shiite Islam, while Erdogan has worked assiduously to bolster his image as the most prolific defender of Sunni Islam in the region. Alliances are already shifting, with the YPG recently asking the Assad regime to deploy troops to Manbij, near the Turkish border. Some U.S. policymakers recognize how detrimental a growing relationship between Assad and the Kurds would be and have scrambled to persuade Trump to slow or even walk back aspects of the planned withdrawal.

The consequences of fighting the Kurds and ignoring the Islamic State could be doubly damaging for Turks at home. If Erdogan follows through on attacking the Kurds in northern Syria, it will keep Turkey's military occupied in that theater and could prompt retaliation by Kurdish militants in Turkey proper.

Throughout the years, Kurdish terrorist groups have demonstrated the ability to strike deep into the heart of Turkey—and with devastating effect. In the summer of 2015, Kurdish militants killed a Turkish soldier and wounded several others in Adiyaman, while two police officers were gunned down in Ceylanpinar. So, with forces deployed in conventional military combat in another country and ongoing counterterrorism investigations and operations against Kurdish terrorists internally, it is highly doubtful that Erdogan can deliver on his promise to Trump to wipe out what remains of the Islamic State in Syria.

If Islamic State militants are allowed to rebuild their networks in Turkey, the implications are dire.

If Islamic State militants are allowed to rebuild their networks in Turkey, the implications are dire. The Islamic State will be able to use Turkey for logistical support, thus fueling its insurgency across the border in Syria. Rogue elements could also launch attacks in Turkey, while other cells might seek to plot attacks in Europe.

Turkey was never completely sincere in its fight against the Islamic State, often sending conflicting messages to friends and foes alike. Between 8,000 to 10,000 Turks have moved to Syria and Iraq as foreign terrorist fighters since the beginning of the conflict. According to Turkey's Social Trends Survey carried out among 1,500 people across Turkey in 2015, about 9 percent of Turks said they believed the Islamic State was not a terrorist organization, and more than 5 percent said they supported its actions.

Turkey is scheduled to hold local elections March 31, 2019. Erdogan has expressed concern about the outcome of these elections amid the economic crisis Turkey has been suffering from. The fight against the PKK has often been a great domestic tool for Erdogan to mobilize the nationalist voter base in Turkey, and his Justice and Development Party has aligned itself with the Nationalist Movement Party for the March elections. Domestic politics were believed to be a major justification for Erdogan's rationale when he announced in mid-December—two weeks before his phone call with Trump—that Turkey was going to start the operation against the SDF.

Erdogan relies on the Free Syrian Army (FSA)—a group of Syrian Arab military officers who formerly served under Syrian President Bashar al-Assad—in the territories he is holding. He may be planning to deploy the FSA during his promised offensive against the SDF, but there are a host of complicated issues to consider. First, it is an ill-disciplined force, and there are reports about the atrocities of these forces paid and backed by Turkey. Following an operation by Turkish-backed Syrian rebels in Afrin in March, there were widespread reports of looting and theft of locals' property.

Given all these factors, it's clear that Erdogan is not entirely sincere in his promise to fight back against the Islamic State. Rather, with the Turkish president focused on helping his party gain more power in upcoming local elections, his promise to Trump to wipe out the Islamic State is merely a useful domestic tool to help him boost his popularity as a capable leader and military commander.

Trump's gamble can pay off, but only if Erdogan follows through on his promise to destroy the Islamic State, a pledge that history indicates Turkey's president would be unwilling to keep, no matter how much Washington wants to expedite its plans to extricate the United States from the quagmire of the Syrian civil war.

Colin P. Clarke is an adjunct senior political scientist at the nonprofit, nonpartisan RAND Corporation. Ahmet S. Yayla is an assistant professor at DeSales University and a former counterterrorism police chief in Turkey.

This commentary originally appeared on Foreign Policy on December 31, 2018. Commentary gives RAND researchers a platform to convey insights based on their professional expertise and often on their peer-reviewed research and analysis.