Vietnam's Defense Policy of 'No' Quietly Saves Room for 'Yes' 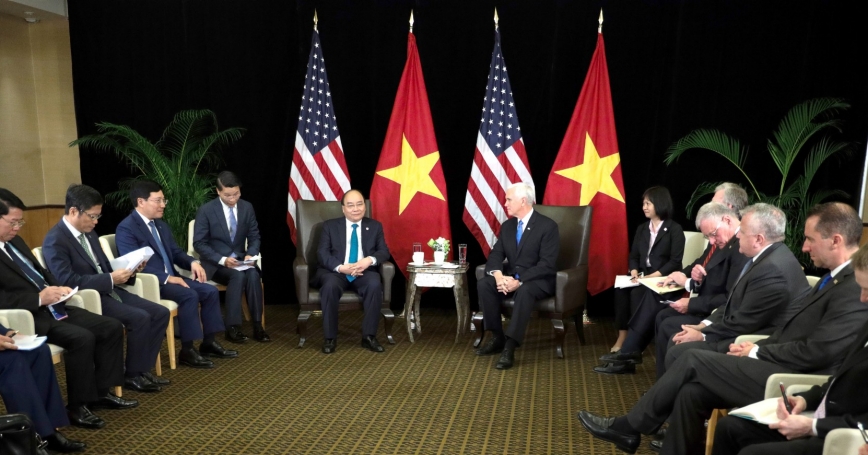 by Derek Grossman and Dung Huynh

Rising U.S.-China tensions over freedom of navigation in the South China Sea have increasingly pressured other states, particularly within Southeast Asia, to choose sides. As a key maritime counterclaimant to China's expansive sovereignty claims in the region, Vietnam in the last few years has played a delicate balancing act. On the one hand, Hanoi has been working directly with Beijing on confidence-building measures to prevent total Chinese domination of the South China Sea. On the other hand, Vietnam is actively pushing back against Beijing by bolstering defense ties to major powers with a stake in maintaining the rules-based international order.

The common refrain on the latter point, however, is that no one should get overly excited about Vietnam's balancing because of the challenges inherent in its “Three Nos” defense policy—that is, no military alliances, no aligning with one country against another, and no foreign military bases on Vietnamese soil. The Three Nos first made an appearance in Vietnam's 1998 (PDF) defense white paper and then reappeared in subsequent papers issued in 2004 (PDF) and the most recent in 2009 (PDF). The policy is also mentioned in Hanoi's new Law on National Defense, which was passed in June and took effect on January 1, 2019. The Three Nos policy is very likely to appear in the next Vietnamese defense white paper when it is published as well.

The Three Nos complicate the Trump administration objective, per the National Security Strategy (PDF), to bolster Vietnam ties to counter Chinese coercion in the South China Sea and broader Indo-Pacific. Growing U.S.-Vietnam defense ties in the last couple of years—headlined in March by the first U.S. aircraft carrier visit to Vietnam since the end of the Vietnam War—appeared to stumble this past fall when Hanoi abruptly cancelled 15 defense engagements for 2019. Hanoi's decision was probably largely the result of disgruntlement over the Countering America's Adversaries Through Sanctions Act (CAATSA), but it also was, at least in part, due to growing concerns that “no aligning with one country against another” (in this case with the United States against China) was in jeopardy. To be sure, there will always be setbacks, but Washington in general should take solace in the fact that, beneath the surface, the Three Nos actually offer significant breathing room—i.e., “yeses”—for defense cooperation.

On “no military alliances,” Vietnam has essentially created a major loophole in its own rule. Hanoi's bottom line is to avoid publicly describing military ties as an arrangement whereby Vietnam would have to support another country if that country were attacked, or vice versa. As long as characterizations of military exchanges remain vaguer, then Vietnam is likely to be willing to engage more extensively. Hanoi has ready-made terminology to imply some level of military and defense cooperation, without stating or framing it as such. These include “comprehensive strategic,” “strategic,” and “comprehensive” partnerships.

At the highest level is comprehensive strategic partnership. Vietnam maintains three such partners: Russia (2001), India (2007), and China (2008). Significantly, China is granted the added special status of being a “comprehensive strategic cooperative” partner, but of course, Vietnam is trying to balance against Beijing in the South China Sea. Thus, Vietnam-China defense cooperation is controlled in favor of other aspects of the bilateral relationship—namely economic, as China is Vietnam's largest trading partner. Interestingly, Japan maintains an “extensive strategic” partnership (2014), implying that it is exceeding the strategic level, but not to the comprehensive strategic tier yet. Meanwhile, Australia was elevated last year to the higher defense level of strategic partner, and the United States is at the next level down, a comprehensive partner (2013). There has been serious official discussion about raising the U.S. status to that of strategic partner. Regardless, all terms enable substantial military exchanges without the stigma of an “alliance” label attached.

The second no, that is “no aligning with one country against another,” is far thornier to navigate and is the primary driver behind Vietnamese reluctance to fully engage in defense cooperation with Washington. Like “no military alliances,” however, Hanoi has already significantly bent this rule itself. For example, Vietnam in May hosted India for an unprecedented joint naval exercise in the South China Sea. It is hard to envision any country other than China that the exercise was aimed at deterring. The same could also be argued about the U.S. aircraft carrier visit. Either way, these occurrences are likely to be relatively rare. They might become more frequent if China increasingly challenges Vietnamese sovereignty claims in the South China Sea.

Reconciling “no aligning with one country against another” will be particularly important in the context of regional cooperation, such as synching Vietnam up with the Quadrilateral Security Dialogue, known commonly as the “Quad.” The Quad is a foreign and defense policy dialogue between like-minded democratic countries—the United States, Australia, Japan, and India—seeking to keep the Indo-Pacific “free and open” from Chinese coercion. As one of us has written previously, Vietnam would be the ideal dialogue partner to the Quad, given the extent of its maritime disputes with China and demonstrated desire to balance against Beijing. “No aligning with one country against another,” however, would seem to preclude Vietnamese participation in the Quad, but it probably does not. A recent study on Southeast Asian perceptions of the Quad concluded that Vietnamese (along with Filipinos) generally maintain a favorable view of the consultative mechanism. Although Vietnam is unlikely to formally join the group due to Three Nos, the odds of Vietnam joining as a Track 1.5-level dialogue partner or observer may be higher.

Finally, the third no of “no foreign bases on Vietnamese territory” is inconsistent with Soviet and Russian official use of Vietnam's strategic South China Sea naval base at Cam Ranh Bay from 1978 to 2002. Starting in 1978, Hanoi leased the facility to Moscow, and the Russians only withdrew in 2002. However, as of 2015, the Russians had apparently still been refueling their military aircraft from Cam Ranh Bay until the United States démarched Moscow and the activity quietly ceased. At the time, Vietnam had also apparently allowed Russian technicians to access Cam Ranh Bay to help train Vietnamese naval personnel on how to operate Russian-built Kilo-class submarines and maintain them. While it is unknown whether these are Russian civilians with military expertise, uniformed military personnel, or a mix of both, these cases strongly suggest that Vietnamese leaders are flexible on the third no if it serves their defense needs.

Fortunately, future U.S. basing in Vietnam is not under consideration. Washington, however, is clearly interested in making naval port calls to Vietnam, and in this area, the clear signal from Hanoi is that these do not violate the third no. Indeed, Hanoi has been quite welcoming of many foreign naval port calls to its shores, including from the U.S., India, Japan, Australia, France, the United Kingdom, Canada, New Zealand, Russia, China, and others.

In sum, the Three Nos are far from set in stone and there is much gray area and interpretation involved. If Hanoi sees a benefit in a particular defense exchange, it will find a way to make the engagement fit within the Three Nos policy or keep the activity relatively quiet. Balancing against China in the South China Sea would appear to offer the United States and other like-minded states fairly wide latitude.

Look no further than Hanoi's decision in early January to express support for Washington's latest freedom of navigation operation (FONOP) in the disputed Paracels Islands. To be sure, Vietnamese leaders in the past have supported Washington's right to conduct FONOPs, but saying so right after the USS McCampbell conducted the operation gave the impression that Vietnamese and American policy were working in tandem. Arguably this could easily have contravened “no aligning with one country against another,” and yet, Hanoi proceeded.

Going forward, expect Vietnam to more liberally enforce the Three Nos, especially if China steps up patrols, conducts further land reclamation and militarization of disputed features, announce an air defense identification zone, or more aggressively competes for access to natural resources and fisheries. Regardless, Vietnam will be more inclined to accept defense engagements that can plausibly be explained publicly as defensive rather than offensive in nature. Defense of the Vietnamese homeland is a key theme in all major defense and communist party publications.

Thus, the United States should expect softer forms of defense cooperation—like supporting Vietnam to develop maritime domain awareness capabilities or helping it to procure additional coast guard capacity following the U.S. sale of the ex-Hamilton-class coast guard cutter—to remain uninhibited. Other forms, like joint exercises, may be out of the reach for the foreseeable future, but not impossible if Beijing's bad behavior continues.

Derek Grossman is a senior defense analyst at the nonprofit, nonpartisan RAND Corporation. He formerly served as the daily intelligence briefer to the Assistant Secretary of Defense for Asian and Pacific Security Affairs at the Pentagon. Dung Huynh is an assistant policy researcher at RAND and a Ph.D. candidate at the Pardee RAND Graduate School.

This commentary originally appeared on The Diplomat on January 19, 2019. Commentary gives RAND researchers a platform to convey insights based on their professional expertise and often on their peer-reviewed research and analysis.