Terrorists on the Border and Government Secrecy 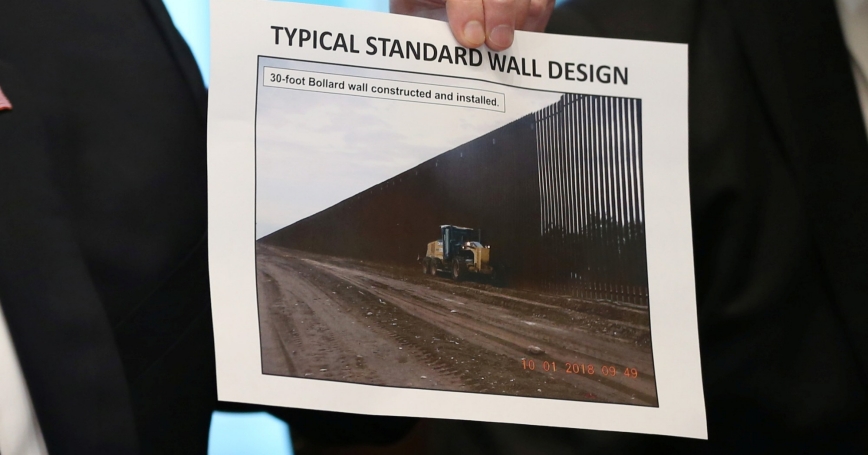 Donald Trump holds up a photo of a border wall design in the Cabinet Room of the White House in Washington, D.C., January 11, 2019

In its effort to secure public support for a wall on the Mexican border, the Trump administration claimed that immigration and border authorities have stopped nearly 4,000 terrorists from entering the country.

The White House later walked back the claim, admitting that the 4,000 number was a mistake, but did not clear up the confusion created by the claim. Detailed information on how many would-be terrorists may have sought to cross the southern border is being withheld on the grounds that it is “sensitive.”

This raises two problems. First, the assertion that thousands of terrorists are pushing against U.S. borders would indicate an extreme threat to the country.

Second, the refusal of officials to offer a fuller explanation of the numbers illustrates how the continued expansion of secrecy in government is damaging the ability of the public to assess the risk and evaluate the response. This could be subversive to democracy.

The absence of information has left it to the news media, former government officials and researchers outside of government to try to figure out exactly what is going on. The confusion contributes to speculation, supposition and inaccuracies that create further fog and fake news. Everyone's credibility—government institutions and the press—could be damaged.

If thousands of terrorists have been discovered, we would have to presume that many others have escaped detection. A constant stream of terrorists attempting to enter the country would be clear evidence of operations planned, organized and funded at the highest levels of one or more established foreign terrorist organizations.

The administration's own lack of action would suggest that no such operations have taken place. There is no national alert. Federal law enforcement and national security agencies have not shown any signs of increased concern.

State and local law enforcement agencies have not been told to raise their level of vigilance. Arrests for terrorism crimes last year decreased, not increased.

At issue are “special interest aliens” (SIAs)—individuals with travel patterns identified as suspicious because they come from particular countries, have traveled to certain places or have patterns of travel that arouse suspicion.

The term SIA does not indicate any specific derogatory information about the individual—and Department of Homeland Security (DHS) has never indicated that the SIA designation means more than that. It certainly does not mean that they are suspected terrorists.

Every year, DHS deals with nearly 80 million arrivals in the United States on various kinds of temporary visitors visas. This does not count the more than 100 million who go back and forth across the borders with Mexico and Canada on Border Crossing Cards. In addition, about a half million people arrive on immigrant visas.

Of these millions of foreign arrivals and others whose visa applications may be denied, we do not know how many may have had travel patterns that aroused suspicions of a nexus to terrorism versus other nefarious activity like smuggling.

Has there been a sudden increase? If there were suspected terrorists stopped by U.S. officials at the border, were they arrested or just told to go away? How many were arrested? It they were taken into custody, where are they now? How many of them showed up at the Mexican border compared to the Canadian border or at U.S. airports? And how many, after being looked at, were allowed to continue into the United States?

DHS Secretary Kirstjen Nielsen says she is unable to provide facts because the information is too sensitive to be released. It should not be. We are talking about statistics, not sensitive matters of intelligence sources and methods.

There would appear to be no legitimate reason to classify information about the number of people stopped at borders based on suspicious travel patterns or other types of conduct requiring additional scrutiny—or how many cases were resolved with or without arrests.

Roughly a half million people legally cross the Mexican border into the United States every day. In 2018, roughly 400,000 were apprehended attempting to cross the border illegally. Certainly, others came in undetected. So how many illegal Mexican border crossers became terrorists?

To find the answer, we have to look at the threat from the other end. Of 180 individuals arrested in the over 17 years years since 9/11 for carrying out or plotting attacks on behalf of jihadist groups—the principal terrorist threat—four were found to have crossed U.S. land borders illegally.

Three brothers, arrested in 2007 for plotting to carry out a terrorist attack, had illegally crossed the Mexican border with their parents in 1984. At the time, they were five, three and less than one-year old. Unless we believe in toddler terrorists, they radicalized here.

These statistics cover only information that, for national security reasons, is considered confidential, secret, top secret or above. But there are numerous categories of sensitive but unclassified information, like Sensitive Security Information, used frequently by DHS, which prevents public discussion.

These lesser “classifications” address legitimate concerns about information getting into the hands of bad guys. But there are numerous categories, the guidelines are not always clear, and the restrictions now appear to be encroaching into the sphere of border protection, immigration enforcement and criminal justice statistics.

This prevents public oversight and could erode trust and undermine democracy.

Brian Michael Jenkins is the senior adviser to the president of the nonprofit, nonpartisan RAND Corporation. Richard C. Daddario is a former federal prosecutor and was the NYPD's deputy commissioner for counterterrorism from 2010 to 2013.

This commentary originally appeared on The Hill on February 13, 2019. Commentary gives RAND researchers a platform to convey insights based on their professional expertise and often on their peer-reviewed research and analysis.