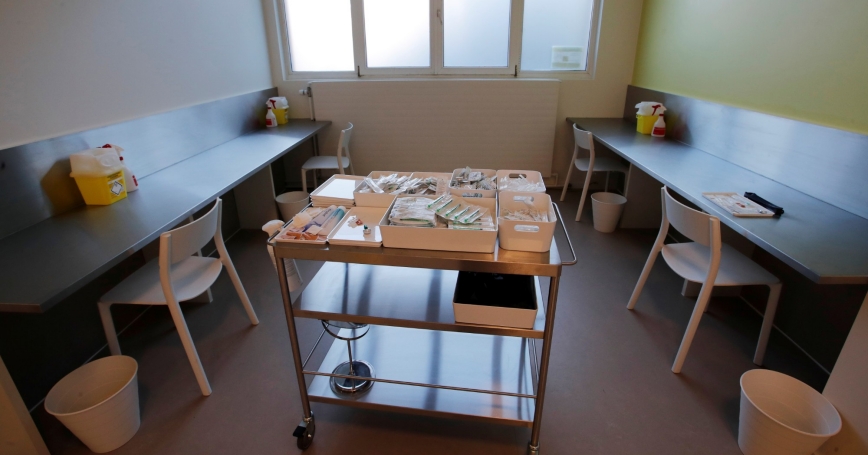 A supervised injection site for people who use drugs, in Lausanne, Switzerland, September 28, 2018

by Beau Kilmer and Bryce Pardo

With drug overdose deaths mounting, cities like Philadelphia and San Francisco are trying to create designated spaces where people who use heroin and other drugs can have their consumption supervised by medical professionals.

More than 10 countries allow supervised consumption sites, also known as “safe injection sites,” but the U.S. does not.

The Department of Justice argues these sites would violate federal law. Yet some in the harm-reduction community contend the statute prohibiting places that allow drug consumption was not intended to ban medical supervision of illicit drug use.

With fellow researchers at the nonpartisan RAND Corporation, we spent the past year analyzing international approaches to addressing opioids and expect debates about these sites to intensify in the U.S. as more jurisdictions look for new ideas to reduce overdose deaths, especially those involving fentanyl.

When it comes to supervised consumption sites, federal decisionmakers have several options.

At one extreme, federal law could be changed to explicitly exempt supervised consumption sites from the statute. At the other, the Drug Enforcement Administration and federal prosecutors could take swift action against staff and property owners if a site opens. Another approach would be for federal agencies to ignore any sites that operate.

But a fourth option that hasn't received much attention would be for the DOJ to use its discretion to shape how these sites operate and where they are located. Something similar has been done with the federal response to states that have legalized cannabis.

After voters in Colorado and Washington legalized cannabis in late 2012, it was unclear how the federal government would react since cannabis was still prohibited under federal law. It wasn't until mid-2013 that the Department of Justice released a document known as the “Cole memo”—named after then Deputy Attorney General James Cole—that highlighted its cannabis enforcement priorities and suggested states that had implemented “strong and effective regulatory and enforcement systems” would likely not threaten those priorities, like preventing the distribution of cannabis to minors.

In the same vein, the Department of Justice could release a memo indicating it does not intend to block pilot programs of supervised consumption sites if certain guidelines are followed. These guidelines could include provisions such as making sure local public health, law enforcement and prosecutors sign a memorandum of understanding supporting implementation; the sites have formal partnerships with multiple treatment providers; the sites prohibit underage clients and are not in areas where youth congregate; and they are subject to a strong evaluation.

Drug consumption under medical supervision reduces the risk of fatal overdoses, disease transmission and other harms associated with unhygienic drug use practices for use that is supervised.

The point about evaluation is important. Drug consumption under medical supervision reduces the risk of fatal overdoses, disease transmission and other harms associated with unhygienic drug use practices for use that is supervised. However, the scientific research about the overall effectiveness of these supervised consumption sites is limited in its rigor and the locations studied.

If the DOJ guidelines were followed—and assuming the state and local governments were on board—those operating and using the facility would not be at risk of federal arrest. Sites would be allowed to operate until the DOJ changed its position, which does happen. Cole's memo was rescinded in 2017, but in practice not much has changed.

In 2017, the Trump administration declared the opioid crisis a national emergency. While reducing costs and increasing access to medication treatment to those with opioid-use disorder should remain top priorities, some jurisdictions will probably want to do even more to address rising overdoses and fentanyl poisonings. The choice confronting federal policymakers is not strictly between a crackdown on supervised consumption sites or changing federal law. As the federal approach to cannabis legalization showed, there are middle-ground options to consider.

Beau Kilmer is codirector of the RAND Drug Policy Research Center and Bryce Pardo is an associate policy researcher at the nonprofit, nonpartisan RAND Corporation. They are co-authors of “Considering Heroin-Assisted Treatment and Supervised Drug Consumption Sites in the United States.”

This commentary originally appeared on The Hill on March 14, 2019. Commentary gives RAND researchers a platform to convey insights based on their professional expertise and often on their peer-reviewed research and analysis.