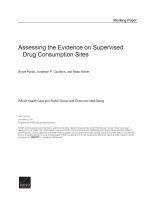 Current levels of opioid-related morbidity and mortality in the United States are staggering. Data for 2017 indicate that there were more than 47,000 opioid-involved overdose deaths (roughly similar to deaths from AIDS at its peak in 1995), and 1 in 8 adults now report having had a family member or close friend die from opioids. There has been a near universal call from blue-ribbon commissions and expert panels for increasing access to Food and Drug Administration-approved medications for those with an opioid use disorder; however, jurisdictions addressing opioid use disorder and overdose may wish to consider additional interventions beyond increasing access to these medications. Two interventions that are implemented in some other countries but not in the United States are heroin-assisted treatment (HAT) and supervised consumption sites (SCSs). Given the severity of the opioid crisis, there is urgency to evaluate tools that might reduce its impact and save lives. This working paper is part of a series of reports assessing the evidence on and arguments made about HAT and SCSs and examining some of the issues associated with implementing them in the United States. The target audiences include decision makers in rural and urban areas grappling with opioids as well as researchers and journalists. This working paper assesses evidence on and arguments made about SCSs. It also offers a descriptive assessment of SCSs and the logic model behind their implementation. The other parts of this series of reports include: (1) a summary report of all the components of the research study; (2) a review of the HAT literature; (3) a report on key informant views on the acceptability and feasibility of implementing HAT and SCSs in selected U.S. jurisdictions heavily affected by the opioid crisis and (4) a report on international experience with the implementation of HAT and SCSs.