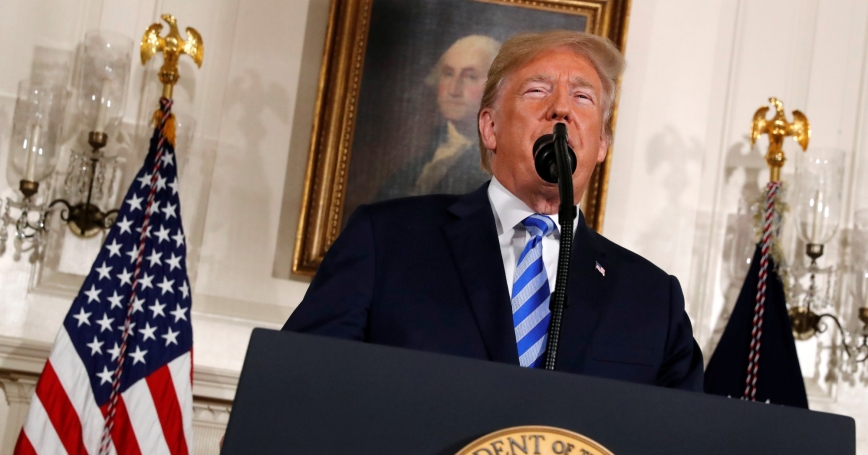 U.S. President Donald Trump announces his intention to withdraw from the Iran nuclear agreement in Washington, D.C., May 8, 2018

A much-awaited summit between U.S. President Donald Trump and North Korean leader Kim Jong Un collapsed soon after it began last week when the two parties failed to reach an agreement that would satisfy them both. Both sides had hoped to get their interlocutor to give up a critical lever: Trump sought North Korean denuclearization, and Kim wanted sanctions relief. To get to the negotiating table, the Trump administration had imposed what it called “maximum pressure”—harsh sanctions and military threats designed to force an adversary to change its behavior—around which Trump's foreign-policy doctrine increasingly seems to revolve.

Trump has deployed pressure campaigns against friends and foes alike. Over the past two years, doing so has brought him some purported successes—for example, the renegotiation of the North American Free Trade Agreement on terms his administration believes to be more favorable to the United States and the ongoing trade war with China. But its record in two of the most pressing nuclear nonproliferation challenges today, North Korea and Iran, highlights the strategy's potential dangers.

As Washington has turned up the heat on Tehran, it has dialed it down on Pyongyang. Both gambits could prove ineffective in the short term. Trump might be going too easy on North Korea and too hard on Iran.

In the case of Iran, maximum pressure has meant withdrawing from the 2015 nuclear deal, reimposing sanctions, and deploying tough rhetoric. In North Korea, the campaign saw the quick escalation of tensions between Washington and Pyongyang, almost bringing the two countries to the brink of military exchanges. But, in both cases, pressure has been applied inconsistently. Over the past few months, as Washington has further turned up the heat on Tehran by urging U.S. allies to back out of the nuclear deal, it has dialed it down on Pyongyang. Both gambits could prove ineffective in the short term; Trump might be going too easy on North Korea and too hard on Iran. And they could cause great harm in the medium term, stripping the United States of all options except for military engagement.

Take North Korea. In the summer of 2017, tensions between Washington and Pyongyang were escalating, and conflict on the Korean Peninsula or a U.S.-North Korean nuclear exchange looked increasingly possible. Trump pledged “fire and fury like the world has never seen” if the North Koreans threatened the United States. The rhetoric seemed to work: By the following summer, the president was able to hold a historic meeting with Kim.

By the administration's account, North Korea was “no longer a Nuclear Threat” following the meeting. As Trump saw it, with the North Korean nuclear weapons program in check, his administration could focus on improving relations. What followed was Washington unilaterally easing the pressure it had exerted on the country. It was no longer clear to North Korea whether the military option was still on the table. As Trump developed more cordial relations with the North Korean leader, Washington didn't do enough to signal U.S. resolve in condemning or stopping Kim's worst infractions. Moreover, with the trade war brewing between China and the United States, Washington wasn't able to rely on Beijing's cooperation with sanctions against Pyongyang.

Despite U.S. talk of improved relations with North Korea, the country's behavior has hardly changed. And it remains unclear whether the process yielded anything worthwhile. Ultimately, the North Korean maximum pressure campaign seems to have been suspended too soon to produce the change the United States seeks in the country's nuclear policy.

America's Iran policy suffers from the opposite problem. In May 2018, Trump withdrew the United States from the multilateral agreement that had curbed Iran's nuclear program since it was implemented in 2016—and even before then, since Tehran had agreed to limit some nuclear activities during the 2012–2015 talks that led to nuclear accord. Trump deemed the nuclear deal with Iran insufficient and rejected European offers to build on it to address additional areas of concern (including Tehran's missile program and regional activities, as well as the fate of the nuclear program after the expiration of key provisions within the agreement in a few years).

The administration has since moved to reimpose sanctions on Iran. White House and cabinet officials have gone further than previous administrations in condemning Iran in a number of national and international forums, including by putting it on notice soon after the inauguration. This maximum pressure campaign seeks to change the country's behavior in 12 areas, stretching from the nuclear and missile programs to Iranian regional policies.

The campaign's scope is too broad, encompassing virtually all aspects of the regime's foreign and security policies, and its objectives virtually unattainable without regime change. It is also too indiscriminate. The sanctions regime is affecting many average Iranians, including medical patients, children, and students, who are unable to afford medication (PDF) or pursue their studies outside their country. For now, the Iranians seem to have made the decision to wait out the Trump administration and not return to the negotiating table until they have more clarity on the trajectory of U.S. domestic politics in the next two years.

A successful pressure campaign would need to meet several requirements. It would be reliant on clear and attainable objectives to help ground it and avoid unrealistic goals; include appropriate signaling or the ability to communicate goals and red lines to the other party; and balance rewards and punishments. Crucially, a pressure campaign will only be effective if enough time is dedicated to it. In other words, there are no quick and easy victories, as the North Korean case demonstrates. And attempts to get them will only push the goalposts further away.

This commentary originally appeared on Foreign Policy on March 6, 2019. Commentary gives RAND researchers a platform to convey insights based on their professional expertise and often on their peer-reviewed research and analysis.