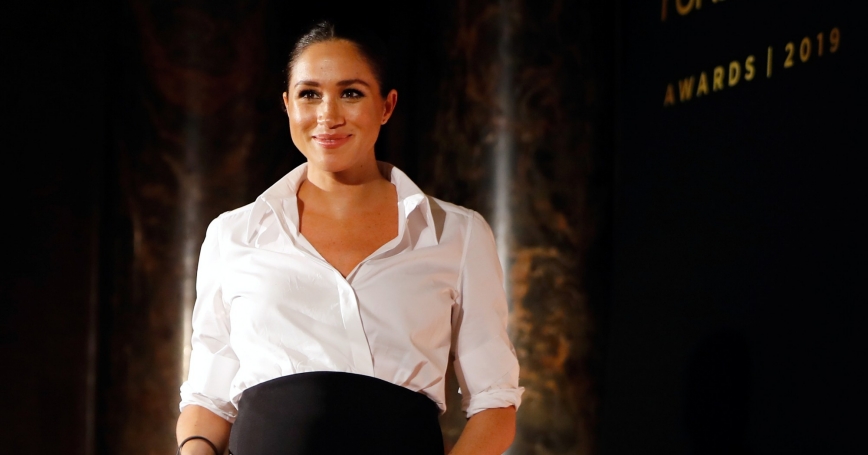 Meghan, Duchess of Sussex, presents an award during the Endeavour Fund Awards in London, UK, February 7, 2019

The latest curiosity swirling around Meghan Markle involves a seemingly innocuous question: Will she follow royal tradition and stand on the steps of the maternity ward hours after giving birth and present her newborn baby to the public? After all, she would be following in the perfectly styled footsteps of her husband's late mother, Princess Diana, and her sister-in-law, Kate Middleton.

Known as an outspoken feminist long before meeting and marrying Prince Harry, Markle has taken a vocal stance on several reproductive health issues, including public discussions regarding how menstruation affects the potential of women and girls globally. This leads some royal observers to believe that she may break with royal tradition and avoid the spotlight immediately after giving birth. From a public health researcher's perspective, that could help raise attention to many of the postpartum challenges faced by women everywhere.

When a woman appears in public mere hours after giving birth, with flawlessly coiffed hair and professionally done make-up, it helps perpetuate an impossibly high standard for women post-childbirth. The image stands in stark contrast to what many women experience during labor and the postpartum period. Giving birth takes between 12 and 24 hours on average. There's a reason it's called labor.

Afterwards, women can experience a whole host of health issues, from pain and exhaustion to infections and depression, and it may take them weeks or months to recover. Each birth experience is unique, and the challenges of the aftermath remain private. Often only a few people beyond the medical staff witness how hard these initial steps toward recovery can be.

Contrast these challenges with an immaculate—and exceedingly public—picture of royalty waving and smiling on the front steps of the maternity ward. Offering up such a polished and glamorous image of life post-childbirth may contribute to the isolation many women experience after giving birth. One in nine women copes with postpartum depression, according to the Centers for Disease Control. Seeing an unrealistic image of new motherhood broadcast around the world won't help.

One in nine women copes with postpartum depression…Seeing an unrealistic image of new motherhood broadcast around the world won't help.

If Markle does decide to pose for the traditional royal photo op and introduce her baby to the world shortly after giving birth, this portrait of perfection could help further perpetuate the idea that many women who complain about pain post-childbirth must not really be experiencing much pain. An oft-cited University of Maryland study (PDF) found doctors are less likely to validate women's complaints about pain or other symptoms, including those experienced during childbirth.

Some of this bias stems from the fact that medical concepts of most diseases and their symptoms are based on understandings of male physiology. Sometimes women have altogether different symptoms than men. And, of course, men don't give birth. Gender biases in the medical system often result in pain experienced by women being minimized or ignored, according to a Harvard Medical School health blog.

Prince Harry Could Revise the Tradition

Earlier this year, Vogue published a cover story on tennis star Serena Williams—one of Markle's close friends—and her harrowing postpartum experience. In the piece, Williams says she had to repeatedly pressure hospital personnel about her health concerns to be taken seriously and get the care she needed.

Williams' story isn't a one-off experience: The Maternal Health Task Force reports that the U.S. has one of the highest maternal mortality rates compared to other wealthy countries. Women of color fare particularly poorly; for the past six decades, black women have been three to four times more likely to die from childbirth than their white counterparts. These statistics also affirm how common it is for women to struggle during pregnancy and often into the postpartum period.

Instead of casting aside royal tradition, perhaps Prince Harry could revise it. To promptly introduce the latest member of the royal family to the world, the new father could pose on his own with their newborn. The new mother might be missing from the picture, but the message about the challenges of childbirth would be there for all to see.

Sarah MacCarthy is an associate policy analyst at the RAND Corporation.

This commentary originally appeared on USA Today on April 10, 2019. Commentary gives RAND researchers a platform to convey insights based on their professional expertise and often on their peer-reviewed research and analysis.