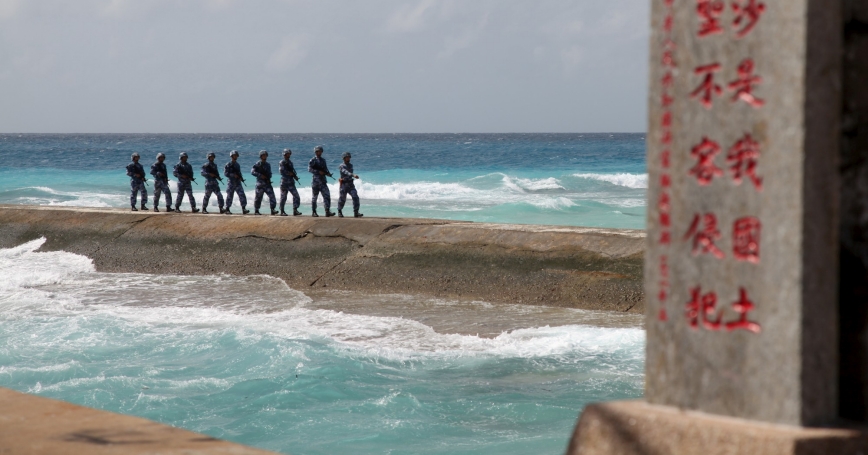 In mid-April, China conducted a series of fresh military flights through the Bashi Channel and Miyako Strait, on the south and north ends of Taiwan, respectively. As has been the case many times in the past, these new activities were clearly meant to signal Beijing's resolve to resort to force against the island and its U.S. and allied defenders if necessary. But there is another, less often discussed reason for these drills. Repeated transits through the Bashi Channel and Miyako Strait offer the People's Liberation Army (PLA) the opportunity to train over future potential battlefields.

Indeed, practice makes perfect. And this is especially true when the PLA is playing from behind. During his address to the 19th Party Congress in October 2017, Chinese President Xi Jinping called for the PLA “to be fully transformed into world-class forces” by 2050. An apparent reference to reaching on par status with U.S. forces, “world-class forces” would be nearly impossible to achieve without realistic training. According to a recent analysis by long-time PLA watcher Dennis Blasko, the PLA has been highly critical of its warfighting capabilities internally and even, to some extent, publicly. These shortcomings prompted Xi this year to order the PLA to engage in intensive rounds of realistic combat training scenarios.

History also likely looms large on Xi's mind. The last major war China fought was against Vietnam in 1979 at their border and it resulted in embarrassing defeat. Furthermore, the war was predominantly a ground forces conflict and not the warfighting Beijing expects to face from a variety of current possible scenarios, whether against Taiwan or another regional opponent in the South China Sea or East China Sea, as all would near-exclusively take place in the air and naval domains. Thus, Beijing's last major war experience gave it virtually zero lessons learned to apply to future armed conflict—a critical and alarming gap in the PLA's understanding of how it might perform when supporting Xi's signature Chinese national security objectives.

Even with realistic training, the PLA can only go so far. At some point the military will need to test its new capabilities and the training it has honed over time. If the PLA has any say in the matter, which it might, then it would very likely prefer to fight Vietnam once again as a warm-up to larger battles, but this time in the South China Sea. There are at least three reasons why Vietnam is likely in the PLA's crosshairs.

Even with realistic training, China's military can only go so far. At some point, it will need to test its new capabilities.

First, as mentioned, the PLA must prepare for warfare in the air and naval domains. In other words, fighting India at the land border, high in the Himalayan mountains, does the PLA little good. Another war on the Korean Peninsula may offer some opportunities, but these would still be relatively limited and specific to the peninsula. Instead, China's overlapping sovereignty claims with Vietnam in the South China Sea, and the constant friction between them, provides a ready-made scenario that would allow the PLA to conduct island seizure and defensive operations along with sustained at-sea joint operations against a regional adversary. To be sure, China and Vietnam in 1988 were involved in a brief skirmish at Johnson South Reef that resulted in Beijing taking over the feature from Vietnam. This, however, was a far cry from the type of conflict that would test the PLA's ability to conduct and sustain joint operations. More recently, in May 2014, China and Vietnam squared off over Beijing's emplacement of the Haiyang Shiyou 981 oil rig in disputed waters. Although the conflict did not rise above the coast guard and fishing boat level, the PLA Navy nonetheless stationed a limited number of surface assets nearby in case of escalation. Next time could be very different.

Second, the PLA would almost certainly prefer a fight without the possibility of bringing the United States into the conflict. Since the PLA is yet to become “world-class forces,” logic would say it is unprepared to deal with such a scenario right now (though of course it would fight if required). That means fighting nations with U.S. security alliances—Australia, Japan, the Philippines, South Korea, and Thailand—runs the heightened risk of an unwanted major power clash. Of these countries, Beijing has ongoing sovereignty disputes with Japan and the Philippines that could eventually devolve into armed conflict. However, in the case of Japan, Washington in 2014 clarified that protection of Japanese administrative control over the disputed Senkaku/Diaoyu islands in the East China Sea falls under the U.S.-Japan security alliance. And similarly, in March 2019, the United States reiterated that an attack on Philippine armed forces or public vessels would trigger the Mutual Defense Treaty. While the U.S. pledge does not seem to necessarily encompass Chinese aggression against disputed islands, such as Pagasa/Thitu Island, it nonetheless demonstrates Washington's focus on defending Manila in the region. Notably, Washington does not maintain a formal security alliance with Taiwan, suggesting increased vulnerability for the island. This is true to some extent as U.S. policy has always been one of strategic ambiguity. However, the Taiwan Relations Act commits Washington to defending Taiwan from Chinese military aggression, even if short of a formal, defined, military alliance.

Unlike U.S. security allies and the special case of Taiwan, Vietnam has no expectation of receiving military support from Washington. During the May 2014 oil rig standoff, for example, the United States merely issued a statement blaming China and urging both sides to conduct themselves peacefully and in accordance with international law. That said, U.S.-Vietnam defense relations have made enormous strides in recent years, with an American aircraft carrier visiting Da Nang in March 2018—the first since the end of the Vietnam War. Either way, Hanoi's “Three Nos” defense policy forbids security alliances, making it unlikely Hanoi would seek to deter China through a formal declaration with Washington. (In case you are wondering about the other two “nos,” they are no stationing of foreign troops on Vietnamese territory and no working with one country against another). Thus, Beijing probably feels relatively confident that U.S. intervention is far less likely in the case of Vietnam than with the other allies mentioned or Taiwan.

Third, and finally, the PLA would prefer a conflict that is winnable. Although perhaps a truism, it is particularly important given the embarrassment the PLA felt following its loss in the 1979 border conflict against Vietnam. Luckily for the PLA, this time around it will have overwhelming military advantages in the South China Sea. As I have examined previously, Vietnam's military modernization in recent years has been geared toward defending the homeland and, if necessary, conducting a spectacular surprise attack on PLA assets to push Beijing toward de-escalation. But if China decides to proceed after weathering this “bloody nose” strategy, then Vietnam is fundamentally incapable of sustaining operations on par with China due to shortfalls in capabilities, training, and manpower. Additionally, in the critical area of military doctrine, Vietnam has never fought in the air and naval domains (though admittedly neither has the PLA), raising serious doubts about whether Hanoi can even conduct joint operations in the first place. Indeed, Vietnam may be more focused on countering China's maritime militia and coast guard capabilities in the gray zone as this is the most likely future scenario. Regardless, Vietnam is a middle-sized power that should be easily defeatable for Xi's improving PLA.

Clearly the arguments made here are meant to be intentionally provocative, but with an injection of facts and informed reasoning. The PLA, and Beijing for that matter, is probably not looking for a fight. Warfare could severely disrupt China's economic development and could further damage Beijing's international reputation and relationship with the United States. But if a regional situation were to warrant use of force, then Vietnam would be the PLA's preferred warm-up because it would offer the military much-needed combat experience in the air and naval domains, without the threat of U.S. intervention, and in a winnable situation. No country other than Vietnam presents the PLA with such controlled and favorable conditions. As such, greater attention is warranted on the China-Vietnam relationship in the South China Sea in the future.

This commentary originally appeared on The Diplomat on May 14, 2019. Commentary gives RAND researchers a platform to convey insights based on their professional expertise and often on their peer-reviewed research and analysis.