This report examines the key drivers behind China's strategic bomber flights throughout the Asia-Pacific region. It provides a review of all known flights, assesses Chinese official statements, and unofficial expert commentary on flights while leveraging many sources to better understand and gauge regional reactions. The report recommends specific responses for consideration by the U.S. Air Force, U.S. policymakers, and allies and partners. 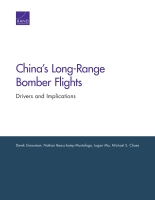 This report examines the key drivers behind China's strategic bomber flights throughout the Asia-Pacific region, assessing Chinese commentary on flights and leveraging a number of sources, including interviews in Taipei and Tokyo, to better understand and gauge regional reactions. The report recommends specific responses for consideration by the U.S. Air Force and U.S. policymakers, as well as allies and partners, offering an in-depth analysis of the key issues driving top Chinese leaders to move in the direction of conducting these overwater bomber flights.

Since March 2015, the Chinese People's Liberation Army Air Force (PLAAF) has sent its strategic bomber on long-range overwater flights on at least 38 separate occasions to important areas throughout the Asia-Pacific region. Chinese leaders seek to achieve at least four key objectives with PLAAF bomber flights throughout the region: First, bombers enable Beijing to send a deterrence message or to signal resolve in the conventional military domain to defend its maritime territorial claims. Second, overwater flights significantly enhance realistic training for PLAAF operators. Third, successful bomber flights offer Chinese leaders the opportunity to play up their achievements for domestic consumption, highlighting progress toward the building of "world-class" military forces. And fourth, the increased operational tempo of PLAAF bomber flights around Taiwan appear to be designed, at least in part, to ratchet up pressure against Taiwanese president Tsai Ing-wen, as she has refused to acknowledge the 1992 Consensus, also known as the One China Consensus, since taking office in May 2016.

The research reported here was commissioned by the United States Air Force and conducted by the Strategy and Doctrine Program within RAND Project AIR FORCE.