Making Headway Against the Sinai Insurgency 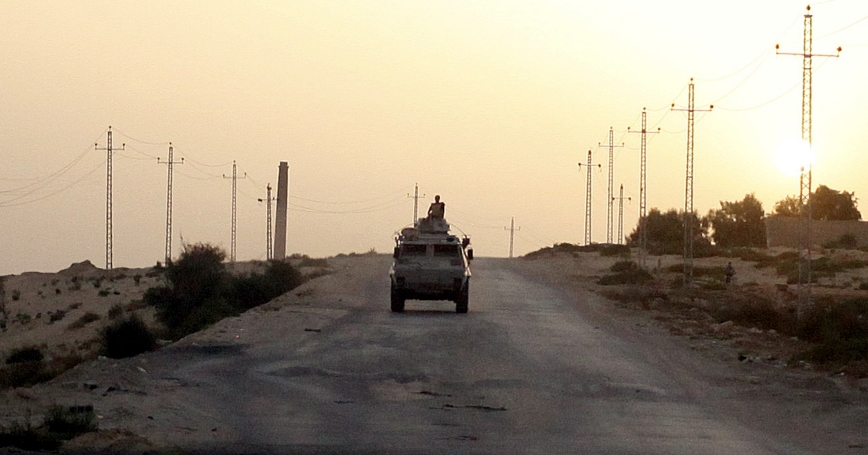 An Egyptian military vehicle on the highway in northern Sinai, Egypt, May 25, 2015

Since 2013 Egypt has been engaged in its largest military campaign in the Sinai peninsula since the 1973 war with Israel. This massive troop deployment, reportedly consisting of 88 battalions numbering 42,000 personnel, is part of an effort to stem a deadly ISIS-affiliated insurgency that has been ongoing since the Arab Spring in 2011 and picked up in intensity after the 2013 ouster of former Islamist president Mohamed Morsi. In February 2018, the Egyptian government embarked on a “comprehensive” military operation dubbed Operation Sinai 2018. This has been the most expansive effort yet to root out the insurgency, with operations conducted without clear timelines or objectives in both the Sinai and west of the Suez. Including this most recent operation, the military reports that it has killed over 7,000 militants and arrested 27,000 (PDF)—a stunning number considering that most estimates put active membership in Wilayat Sinai (WS), or Sinai Province, by far the largest and most active militant group, at about 1,000. According to data sourced from the IISS Armed Conflict Database, the fighting has caused nearly 100,000 of the Sinai's 1.4 million residents to become displaced and has left over 400,000 in need of humanitarian aid.

If the Egyptian government continues to rely solely on scorched-earth tactics and fails to productively engage the local Bedouin population, the insurgency will continue to fester and expand.

Countering this insurgency has been at the forefront of Egyptian president Abdelfattah al-Sisi's agenda since he assumed office in 2013. Roughly 1,000 security personnel have been killed in the region during this period. However, despite brutal methods and substantial military effort, the Egyptian government has little to show from the past five-plus years of counterinsurgency operations in the Sinai aside from hundreds of military and civilian casualties and an undeterred adversary. Furthermore, its counterterrorism strategy has only served to alienate much of the local Bedouin population—the group that could most effectively assist the government in countering the militants given their intimate knowledge of the Peninsula and famed ability to provide intelligence. In contrast, the IS-affiliated militants have proved adept at navigating the region's complex tribal politics. Capitalizing on feelings of suspicion and disenfranchisement, they have been able to rely on many tribes turning a blind eye to their activities and, at times, to actively recruit from the aggrieved population. It is becoming increasingly clear that if the Egyptian government continues to rely solely on scorched-earth tactics and fails to productively engage the local Bedouin population, the insurgency will continue to fester and expand.

Among the militant groups on the Peninsula, Egypt's main adversary is WS. Formerly known as Ansar Bayt al-Maqdis, or Allies of the Holy House (a reference to Jerusalem), the group pledged its allegiance to ISIS in 2014 and changed its name to reflect its new loyalty. Despite its small size, the group has been able to successfully battle the Egyptian army and conduct attacks on both civilian targets and security personnel in an attempt to topple what it claims is an apostate government in Cairo. Many of these attacks have been shockingly deadly, including an attack on a mosque in Bir al-Abd that resulted in the deaths of 311 worshippers—the deadliest terror attack in Egyptian history. Alongside WS, there are several other minor insurgent groups who have operated or are currently operating in the Sinai. The most notable of these include the Allied Popular Resistance Movement, Jund al-Islam, and Tawhid wal-Jihad. Despite varying ideological leanings and allegiances, all of these groups have been consistent in their opposition to the government and their use of violence against security forces. Although their prominence in the insurgency ebbs and flows, these groups are occasionally able to pull off significant attacks against civilians and security forces.

The history of violence in the Sinai can be traced to a period well before the Arab Spring or the rise of ISIS. Various extremist groups, criminal entities, and disaffected residents have operated out of the Sinai for decades. The peninsula has historically been a hot-bed of illicit activity—particularly smuggling. This includes arms, drugs, and human trafficking as well as the smuggling of supplies and consumer goods into the Gaza Strip to circumvent Egyptian- and Israeli-imposed blockades of the Palestinian territory. The vast rugged terrain of the Sinai, coupled with its lack of infrastructure, makes policing extremely challenging while allowing insurgents to conduct quick hit-and-run operations and then disappear.

Complicating matters further, such illicit activities often are the primary income streams available to the region's economically ostracized Bedouin population. Historically, Sinai's Bedouin have been at odds politically, economically, and socially with the country's central government, which sees them as a potential fifth-column and has often ignored them or treated them as second-class citizens, if granted citizenship at all. Suspicions persist about the Bedouins as a result of accusations that they collaborated with Israel during its occupation of the Sinai after the 1967 Arab-Israeli War. They are barred from joining the military and are locked out of key government positions. Even prior to the current insurgency, the Bedouin population was subject to harassment by security forces and frequent instances of mass arrest. Some tribes are denied opportunities for citizenship and lack access to public services such as schools and hospitals. The government's heavy-handed counterinsurgency tactics have managed to alienate a significant portion of the Bedouin tribes, prompting them to engage in nonviolent resistance against state institutions. Furthermore, Bedouins fighting alongside WS often are reacting to perceived grievances against the central government rather than a shared ideology. Tribal allegiances sometimes lead tribes to protect their members who have cooperated with WS, regardless of the status of the tribe's affiliation. These conditions were seen in the ISIS conflicts in Iraq and Syria as well.

This is not to say that all or even most Bedouins, despite their disenfranchisement, are actively fighting alongside or are allied with WS. In fact, several tribes—including the large Tarabin tribe—often clash with the ISIS affiliate and actively coordinate with the Egyptian military. There have been reports of the military directly equipping tribespeople to fight against ISIS-affiliated insurgents. The two most poignant examples of this are Battalion 103 in Sheikh Zuweid in the north and the Abd al Salam Group in Central Sinai, both of which have been very active in the fight against WS. Partnering with the Bedouin population in this manner could potentially have some near-term benefits in the fight against WS. Cooperation with tribal alliances in Iraq was one of the more effective tools in the coalition's counterterror campaign against al Qaeda. However, the Iraqi case also serves as a cautionary example. Some of the militiamen armed by the U.S. and coalition forces later went on to join militant groups. The same can just as easily happen in Egypt. Furthermore, the Egyptian government has relatively little direct authority over tribal militias, which operate as distinct armed civilian groups outside the established military chain of command. Consequently, Bedouin militias aligned with government forces have been linked to abuses of power and extrajudicial killings, with no subsequent efforts to investigate or hold those responsible to account. This arrangement serves to undercut the rule of law in the province and could potentially make regional stabilization much more difficult when, even if the WS insurgency subsides, Cairo will have to contend with heavily armed tribal militias in a region deeply mistrustful of the central government. There is a risk that these tribes may turn their weapons against the state or against each other.

Although the number of attacks has come down from its peak in 2016, the violence shows no sign of abating further. The number of violent clashes with Egyptian security forces and attacks on civilians during 2018, at 17.4 events per month, was higher than it was in 2014, at 11.9 events (numbers based on data received from the Tahrir Institute for Middle East Policy). If anything, the government's approach seems to be exacerbating the problem. North Sinai has been under a state of emergency for the better part of four years, with journalists banned from the area amid a heavy-handed government campaign involving mass arrests and indiscriminate punishment. According to activists, family members of suspected militants are targeted and arrested as a form of collective punishment. Soldiers in the region are routinely accused of abusing their power and lacking concern over civilian casualties, alienating the population from a government that in theory should be acting to protect them.

The Egyptian government's exclusive focus on security forces to weaken the insurgency in the Sinai does not appear to be succeeding.

The Egyptian government's exclusive focus on security forces to weaken the insurgency in the Sinai does not appear to be succeeding. Making progress on the issue of militancy in the Sinai could require a radical rethinking of Egypt's counterinsurgency strategy. Rather than relying solely on its traditional approach emphasizing lethal force and mass arrests, the Egyptian government could work to address the underlying factors that have turned the Sinai into fertile ground for insurgents. In order to effectively weaken WS and other sources of terrorism and violence, Cairo could pursue a consistent, long-term, “soft-power” strategy to make inroads with the native Bedouin population. Rather than razing villages they could provide needed infrastructure capacity-building and economic support—areas where the Egyptian government has a large competitive advantage over the militants. Past development efforts have often been poorly and inconsistently funded and considered by Cairo to be low priority. Many are inexplicably cancelled prior to their completion or have their funds diverted to other priorities. Those initiatives that are implemented often take place without the input of local residents and instead benefit Nile Valley transplants who take advantage of tourism related jobs and government incentives to move to the Sinai. Including the Bedouin population in conversations about development and allowing them to benefit from initiatives could reduce the financial incentives to pursue illicit activities and to work with or for WS militants. Moreover, more could be done to ensure that security forces respect the rights of local residents. Reducing the antagonism between state security forces and the Bedouin population could severely hamper WS's recruitment efforts and make it much more difficult for them to operate while making residents more willing to cooperate with security forces.

Even if the Egyptian government managed to crush WS and other insurgent groups militarily, it would likely do little to address the underlying factors that led to their success in the first place. Ignored for decades by Cairo, the Sinai remains one of the most underdeveloped regions in the country. Residents often find themselves without access to health care, education, or even clean water. To make headway against WS and other militant groups on the peninsula, the Egyptian government could focus on providing services to its citizens there and repairing its relationship with them. Better aligning the tribes with Cairo and having them serve as the government's eyes and ears in the region could provide the Egyptian military with a significant advantage—one they are unlikely to succeed without.

David Thaler is a senior researcher and Yousuf Abdelfatah is a research assistant at the nonprofit, nonpartisan RAND Corporation.

This commentary originally appeared on Small Wars Journal on August 12, 2019. Commentary gives RAND researchers a platform to convey insights based on their professional expertise and often on their peer-reviewed research and analysis.