The Ramifications of China's Reported Naval Base in Cambodia 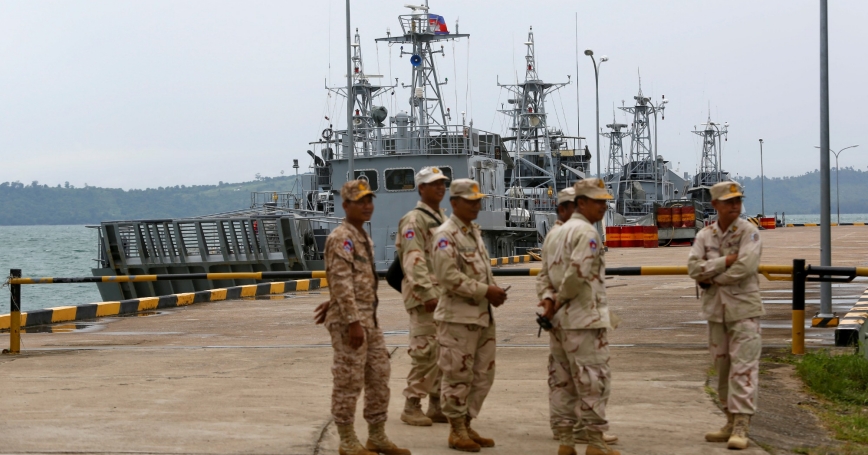 Sailors stand guard near petrol boats at the Cambodian Ream Naval Base in Sihanoukville, Cambodia, July 26, 2019

Late last month, The Wall Street Journal reported that China and Cambodia had signed a secret agreement allowing the Chinese navy to use a military facility near Ream, along Cambodia's southern coast. According to a draft of the deal obtained by the Journal, it would reportedly grant China a 30-year lease on the port and permit the stationing of troops and storing of weaponry in an installation that covers 192 acres and includes one pier and other facilities. Images have also shown the construction of a military-grade airport and a development project of dubious commercial viability. The facilities, if managed by the Chinese, could support visiting ships and aircraft of the People's Liberation Army Navy that are engaged in patrols and other noncombat missions in the South China Sea.

After U.S. Vice President Mike Pence sent a letter expressing concern about the agreement, Cambodia's government swiftly denied the reports. “No such thing could happen because hosting foreign military bases is against the Cambodian constitution,” Prime Minister Hun Sen asserted. His government promptly organized a tour for foreign journalists to visit the purported location of the future base. Chinese officials similarly dismissed the reports, calling them “not true.”

One issue contributing to the controversy has been the nature of the potential military facilities. Both Cambodia and China strenuously reject the suggestion that a “military base” is underway, but their statements do not necessarily deny the possibility of other sorts of arrangements. In fact, Chinese officials and analyst have fairly consistently rejected the idea that the country even seeks “military bases,” which carries a negative connotation in China of fortified locations featuring large deployments of armed troops historically favored by imperial powers.

Chinese scholars have instead upheld the ideal of “strategic support points” to describe locations that provide logistical support for overseas military operations or act as forward bases for deploying military forces overseas. Chinese analysts point out, however, that these locations are envisioned as providing benefits to their hosts and generally are not capable of supporting any offensive operations. The most militarized of China's strategic support points are the fortified artificial islands it has built up recently in the South China Sea and the logistics support base in Djibouti established in 2017.…

Timothy R. Heath is a senior international and defense researcher at the nonprofit, nonpartisan RAND Corporation.

This commentary originally appeared on World Politics Review on August 5, 2019. Commentary gives RAND researchers a platform to convey insights based on their professional expertise and often on their peer-reviewed research and analysis.