Trump's Tariffs Against China Aren't Working. And There's No Quick Resolution in Sight 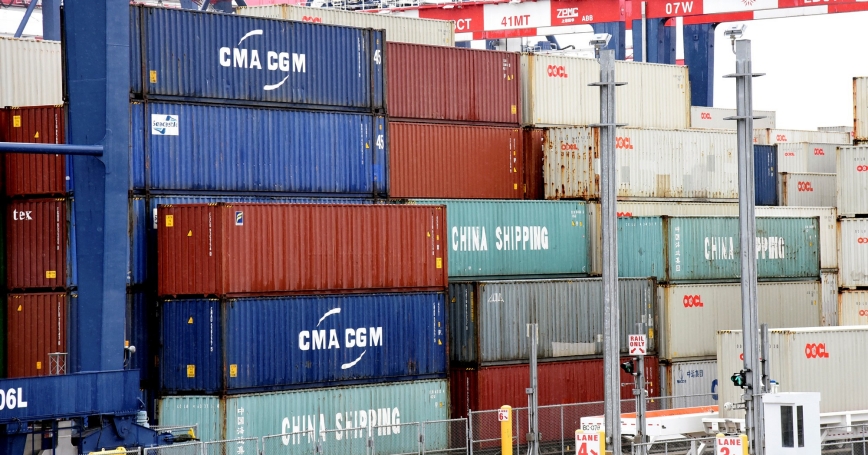 Shipping containers at the port in San Pedro, California, March 22, 2018

The Trump administration's move to postpone the imposition of new tariffs on Chinese consumer goods until December comes as stiff tariffs the United States has already levied against China—on hundreds of billions of dollars of other commodities—don't seem to be working. The go-it-alone approach is imposing a high and growing cost on the American economy and could ultimately threaten global prosperity. No quick resolution is in sight.

There are two problems in U.S.-China trade and investment relations that the current actions seem ill-suited to resolve: China's state-directed industrial policy and its privileged position under global trade rules.

China's industrial strategy depends on fostering domestic companies, including many state-owned enterprises, in increasingly high-tech sectors. The state provides Chinese companies with protection from foreign competition, subsidies, access to capital, and critical technology obtained from international market leaders without—or without adequate—compensation. It also gives them support to export, or dump, goods at marginal cost onto international markets, including in the developing world. This Chinese strategy has hurt the United States, as well as the European Union, Japan, Canada, Australia, and many other countries, large and small.

In addition, China benefits from its official status as a “developing country” under World Trade Organization rules. This status reduces the burden of the organization's rules and ensures that many other developing countries that similarly benefit from the status line up to support it. China's deployment of the Belt and Road Initiative also helps it buy the sympathy and support of a wide variety of countries anxious for initiative investments to improve their infrastructures.

The strategy most likely to succeed against both problems would have been to assemble an international coalition aimed at compelling China to accept constraints on subsidies and to adopt a responsible approach to its industrialization objectives that wasn't abusive to its trading partners, rich and poor.

It also would have helped if the United States had remained a member of the Trans-Pacific Partnership, which brought together China's neighbors in a U.S.-led free trade grouping, and persevered with a similar transatlantic agreement with the European Union. Members of both groups could have agreed on common strategies to limit the impact of China's distorting industrial strategy, and on an effort to reform World Trade Organization rules to take away preferential benefits China no longer deserves.

The Trump administration undercut the chances of assembling such a coalition by taking its first trade actions against its neighbors and allies, announcing tariff barriers on steel and aluminum imports to the United States, justified on specious national security grounds.

Then the United States announced tariffs in retaliation against against China's treatment of U.S. investors. The choice of Chinese investment conditions as the U.S. target may have been confusing to China, as the United States was simultaneously trying to discourage its companies from investing in China at all, touting domestic investment opportunities instead.

When China retaliated against sensitive U.S. exports, including farm products, the United States fell into the classic trap of escalation without an endgame. The U.S. strategy may have signaled to China that the actual U.S. goal was to erect and maintain tariff barriers to most Chinese goods. And U.S. negotiating demands expanded to include guarantees of farm purchases and the right to review Chinese legislation prior to adoption. This may have convinced the Chinese there wasn't a negotiated solution to be had.

U.S. and Chinese retaliatory trade barriers are harming economic growth in both countries, as well as spooking global markets.

China has been anxious to prevent the creation of a global coalition aimed at its practices, which may be one reason why its president, Xi Jinping, characterized himself as a multilateralist at the World Economic Forum in Davos, Switzerland, in 2017, and why China has been intervening in recent years to support its currency, the yuan. China also took measures to facilitate overseas investment by Chinese companies and to stimulate domestic consumption.

But U.S. and Chinese retaliatory trade barriers are harming economic growth in both countries, as well as spooking global markets.

Given the goals the United States has articulated publicly, it is difficult to see an early resolution to the U.S.-China trade disputes. In any case, comprehensive trade barriers against China may be as much the goal as the lever. U.S. measures may also have been always more political than economic in motivation.

Unfortunately, in the meantime the unilateral U.S. measures do little to affect the main target—the globally distorting Chinese industrialization policies. And if as a result Chinese and U.S. companies in a variety of high-tech sectors no longer compete in the U.S. marketplace, it could have the unintended consequence of pushing China's to clinch market leadership elsewhere.

Charles Ries is vice president, international, at the nonprofit, nonpartisan RAND Corporation. He served as principal deputy assistant secretary of State for European affairs (2000-2004) and oversaw economic sections at the U.S. Embassy in London and the U.S. mission to the European Union.

This commentary originally appeared on Los Angeles Times on August 20, 2019. Commentary gives RAND researchers a platform to convey insights based on their professional expertise and often on their peer-reviewed research and analysis.