Maintaining the U.S. Edge in the Freely Associated States 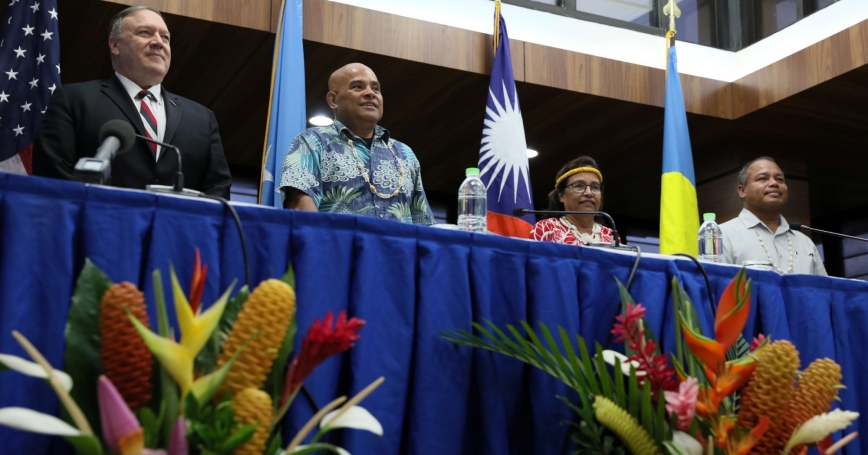 In August 2019 Mike Pompeo became the first U.S. secretary of state to visit the Federated States of Micronesia (FSM). He announced the start of negotiations to extend the Compact of Free Association (COFA)—an international agreement that provides the U.S. military with unfettered land, air, and sea access to FSM in part through yearly economic assistance. Just before Pompeo's arrival, China donated U.S.$2 million to Micronesia's Trust Fund. This was also a first.

In the geo-strategically vital region of the Freely Associated States, China is increasingly competing with the United States for influence.

In the geo-strategically vital region of the Freely Associated States (FAS)—comprised of FSM, Palau and the Marshall Islands—China is increasingly competing with the United States for influence. Beijing seeks to incorporate the FAS into its signature Belt and Road Initiative (BRI) by boosting investment and economic assistance.

This effort is designed to heighten China's role in the Pacific and potentially reduce the number of Taiwan's diplomatic partners. Out of Taipei's six remaining allies in the Pacific, two are Palau and the Marshall Islands.

Chinese scholars generally see the Pacific Islands as strategically important in the context of U.S.-China competition. In comparison with other regions, such as the South China Sea, there is little publicly available Chinese analysis focussing specifically on the FAS. Still, Chinese analysts increasingly view the Pacific region as closely tied to China's national security interests.

The FAS could eventually provide the Chinese military with air and naval facilities to complicate U.S. military access to the Indo-Pacific. The FAS also possess natural resources and political power as a voting bloc in international organizations.

The second type of threat is the potential geostrategic encirclement by the United States and its allies such as Japan, the Philippines, and Taiwan. This could form a barrier to China's maritime expansion into the open ocean.

To deal with the latter, Beijing has primarily focussed on diplomatic and economic engagement so far. Beijing has attempted to convince the Marshall Islands to switch diplomatic recognition away from Taipei in exchange for lower import tariffs at Chinese ports on Marshallese-flagged commercial shipping.

In Micronesia, Beijing is engaged in numerous infrastructure development projects as part of the BRI. China also temporarily ramped up tourism to Palau before dropping its numbers, probably as punishment for its refusal to drop recognition of Taiwan.

One Chinese observer has alluded to the possibility of a long-term military presence in the region and argues for the establishment of “strategic fulcrum ports” in the Pacific to secure Chinese maritime access. These ports could provide the Chinese navy with supply points that would reduce the gap in hard power between China and the United States.

Washington's Indo-Pacific Strategy (PDF) to keep the region “free and open”—although primarily aimed at the South China Sea—applies equally to securing the FAS. The FAS play a vital role in U.S. defense strategy. Their location and expansive geographic sprawl can be a significant advantage if properly leveraged, but if ignored or subverted they could become a critical vulnerability.

China is likely to seek ways to loosen ties between the FAS and Washington, especially if U.S.-China relations continue down a competitive and adversarial path. But even if tensions between the United States and China lessen, Beijing will still view the FAS as relevant to its BRI and its efforts to chip away at Taiwan's remaining diplomatic partners.

Pompeo's visit allowed the United States to reaffirm its commitment to the region. It also comes on the heels of an unprecedented White House meeting with the leaders of all three countries in May 2019. There, U.S. President Donald Trump reaffirmed Washington's “unique, historic, and special relationships” with the FAS.

Attention will now turn to renewing the annual economic support arrangements embedded in all the COFAs. Starting in fiscal year 2023, these will expire for FSM and the Marshall Islands, and for Palau in fiscal year 2024. All FAS countries expect the annual economic assistance components of their COFAs to be renewed, but FSM seems most concerned. FSM is the only state that diplomatically recognizes China over Taiwan, participates in BRI, and was accorded a state visit to Beijing. This had a lasting positive effect on FSM's perception of China.

If the United States cannot agree on renewing these critical sources of economic aid, then the FAS may search for alternative sources of revenue—and China seems ready to supply it with an eye toward advancing its position in the region.

The United States and its allies and partners—including Australia, Japan, New Zealand and Taiwan—will need to do more than just maintain appropriate levels of funding. They will also need to engage with other issues including health, economic development, natural disasters, climate change and illegal fishing to sustain a strong partnership with the FAS. Doing this will prevent, in Pompeo's words, “Chinese attempts to redraw the Pacific in its authoritarian image”.

This commentary originally appeared on East Asia Forum on September 2, 2019. Commentary gives RAND researchers a platform to convey insights based on their professional expertise and often on their peer-reviewed research and analysis.