Tackle Fentanyl like a Poisoning Outbreak, Not a Drug Epidemic 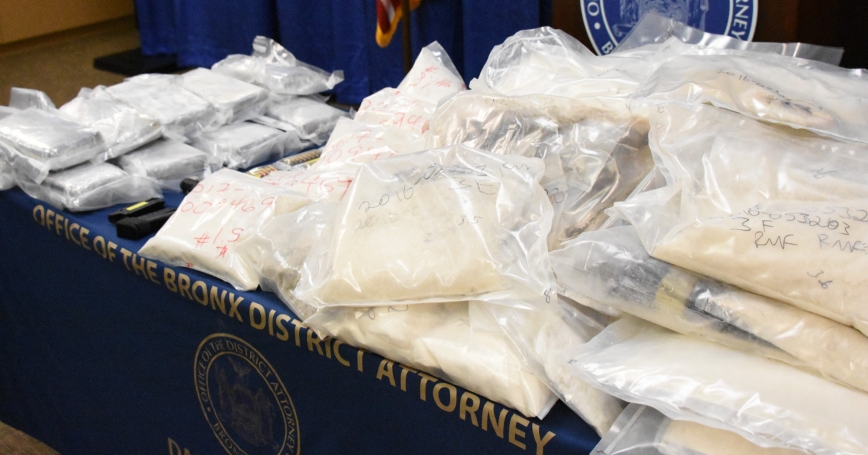 Bags of fentanyl and heroin that were seized by authorities

The U.S. Centers for Disease Control and Prevention recently released drug overdose statistics for 2018, and they are shocking. Of the estimated 47,000 deaths from opioids last year, roughly two-thirds involved potent synthetic opioids, most of them fentanyl.

For most victims, fentanyl was not their drug of choice. Rather, they were poisoned by dealers who mixed it into baggies of heroin or pressed into fake-opioid tablets.

America's fentanyl problem is far deadlier than past crises with other illegal drugs. It also has a fundamentally different character. For most victims, fentanyl was not their drug of choice. Rather, they were poisoned by dealers who mixed it into baggies of heroin or pressed into fake-opioid tablets.

What is happening with fentanyl is unlike the trajectory of previous drug epidemics. Those typically involved “contagious” spread of initial use—primarily among those who may have been ignorant of the drug's risks. This was the case with prescription opioids, which were prescribed aggressively for chronic pain. Some individuals who sought pain treatment now have an opioid use disorder. So do others who got the pills from neighbors or friends for recreational use.

In the case of fentanyl, it is largely the suppliers—not users—who have embraced the drug because it is an ideal cost-cutting substitute. Synthetic opioids are produced in labs, so they are much cheaper than heroin—perhaps as much as 99% cheaper per dose after adjusting for potency. It's also easy to acquire. Anyone with an internet connection can purchase synthetic opioids that are most frequently made in China and delivered through the mail or by parcel service. Some Mexican crime syndicates trafficking heroin are also adding fentanyl to their portfolios.

Dealers add fentanyl, which is up to 100 times more potent than morphine, to heroin and counterfeit tablets made to look like genuine prescription medications. Adding a few milligrams gives a powerful kick; a few more turn deadly.

Most of the people exposed to—and dying from—fentanyl didn't think they were buying it and didn't want to use it.

In short, most of the people exposed to—and dying from—fentanyl didn't think they were buying it and didn't want to use it. Rather than increasing the number of users, fentanyl is driving up the death rate.

This distinction is important: It means our traditional methods for responding to drug epidemics won't reverse the death toll. Usually government agencies focus on preventing experimentation, reducing accessibility of drugs, and treating individuals to suppress demand. These efforts remain valuable, but they won't immediately curb overdose deaths in places that are drowning in fentanyl.

It is better to conceptualize the fentanyl problem like a poisoning outbreak. The poison is out there—but how can exposure to it be minimized? How can its spread to other regions be contained?

Efforts to disrupt online purchases, for instance, might look very different than traditional drug interdiction efforts. It could include hacking or seizing websites that sell the drugs. Law enforcement might set up fake websites that offer fentanyl but never deliver it. The failure of some sites to fulfill orders might lead to distrust of web-based sales generally.

Eliminating the supply entirely seems impossible. But delaying fentanyl's expansion in the western United States by even a few years could save thousands of lives. Today, fentanyl deaths are concentrated in Appalachia, New England and parts of the Midwest. In 2017, if the rest of the country had had a per capita rate of synthetic opioid-related deaths that was just half of New England's, some 9,000 more Americans would have died from synthetic opioids that year.

Policymakers should be expanding access to naloxone, the overdose reversal medication, but must also look beyond that. Some innovative approaches used in other countries include supervising consumption of illegal drugs so overdoses don't become fatal and providing heroin-assisted treatment for those who have not benefited from other therapies.

Yet, these still may not be enough. Vancouver, Canada, has embraced harm reduction interventions and still has a synthetic opioid-involved overdose death rate comparable to some of the hardest-hit places in the United States. This does not mean such interventions haven't saved lives. But it does suggest that it will take more than this to solve this problem.

Bryce Pardo is associate policy researcher at the nonprofit, nonpartisan RAND Corporation. Jonathan P. Caulkins is Stever professor of operations research and public policy at Carnegie Mellon University and an adjunct operations researcher at RAND. Beau Kilmer is director of the RAND Drug Policy Research Center. They are coauthors of “The Future of Fentanyl and Other Synthetic Opioids.”

This commentary originally appeared on Los Angeles Times on September 1, 2019. Commentary gives RAND researchers a platform to convey insights based on their professional expertise and often on their peer-reviewed research and analysis.