The synthetic opioid surge in the United States is a public health emergency. The authors analyze drug overdose mortality and seizure data to better understand the evolution and concentration of the synthetic opioid problem. They find that overdose deaths involving synthetic opioids have increased but remain concentrated in certain states. Drug policy needs to account for how rapidly these potent opioids are upending the old order. 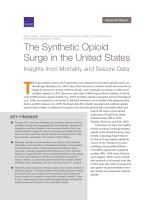 The Synthetic Opioid Surge in the United States

Insights from Mortality and Seizure Data

In this report, the authors examine mortality data at the state level across several drug classes to better understand the evolution and concentration of overdose fatalities in the United States. They also analyze drug seizures of fentanyl and fentanyl analogs across states and over time to determine the overlap between supply-side indicators and state-level mortality data.