Iran's Proxies Are More Powerful Than Ever 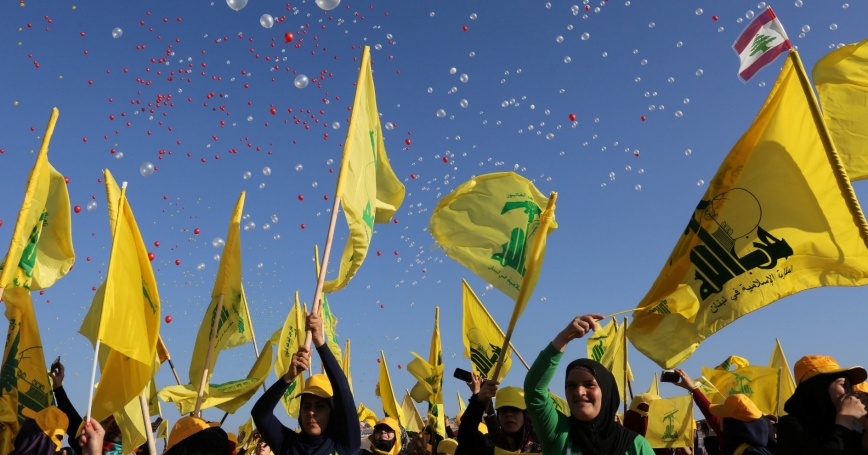 Supporters of Lebanon's Hezbollah leader Sayyed Hassan Nasrallah wave Hezbollah and Lebanese flags at a rally marking the 10th anniversary of the end of Hezbollah's 2006 war with Israel, in Bint Jbeil, Lebanon August 13, 2016

Since U.S. President Donald Trump took office, his administration has pursued a so-called maximum pressure strategy designed to alter the course of Iran's foreign and security policies. The strategy relies heavily on sanctions to change Iranian behavior by complicating its access to external markets and the international financial infrastructure. The overarching objective is to deny Tehran the financial resources required to maintain nuclear and missile programs and a network of proxies including Lebanese Hezbollah, various Shiite militias in Iraq, the Houthis in Yemen, and a growing network of foreign fighters in Syria recruited by Iran from Afghanistan and Pakistan.

It's impossible to deny that the maximum pressure campaign has damaged Iran. The country's economy has slowed down significantly, and its oil revenues have plummeted. As the Trump administration sees it, Iran now has fewer resources to devote to its regional agenda. And the less money Iran has at its disposal, according to this line of thinking, the less damage it can inflict directly or via its proxies in the region.

If maximum pressure has succeeded at its narrow goal of damaging the Iranian economy, it has failed at its broader goal of changing Iranian foreign policy.

But if maximum pressure has succeeded at its narrow goal of damaging the Iranian economy, it has failed at its broader goal of changing Iranian foreign policy.

According to Ambassador Nathan Sales, who handles the counterterrorism portfolio at the U.S. Department of State, Iran still provides Lebanese Hezbollah alone with upward of $700 million per year. Even if this figure is inflated, as some have suggested, few would dispute that Tehran remains Hezbollah's major benefactor. (Hezbollah also makes an estimated $300 million per year by relying on a broad portfolio of funding mechanisms, including transnational criminal activities (PDF) such as fraud, drug smuggling, and trafficking in counterfeit products, including Viagra.) The only sign that Hezbollah has felt the effects of the financial crackdown on Iran is that the group has placed more donation boxes throughout Beirut and other parts of Lebanon. Similarly, Iran's other clients have continued to operate without much disruption. In Yemen, for example, the Houthis have acquired more advanced weapons over the past year, which they have used against Emirati and Saudi military and civilian targets as they have retaliated for the U.S. maximum pressure campaign since late this spring.

Financial sanctions can't affect many of the most important aspects of Iran's proxy relationships, including the training, safe havens, and transfers of weapons and technology that it provides. Tehran has never been interested in cultivating a network of completely dependent proxies. Instead, it has tried to help these groups become more self-sufficient by allowing them to integrate into their countries' political processes and economic activities and helping them build their own defense industries—including by giving them the capability to build weapons and military equipment in their own countries rather than rely on Iran supplying them.

Meanwhile, as the United States withdraws from Syria and Bashar al-Assad regains control over the country, Tehran is slowly moving closer to its goal of establishing a land bridge that stretches across the region. If this dream becomes a reality, the mullahs will be able to move weapons and personnel back and forth between Iran and its growing army of proxies, wherever they are located, and build bases and depots throughout the region with relative impunity. Financial sanctions do not halt progress toward this strategic goal, and current U.S. policy is built almost exclusively on the premise that sanctions alone will fix the problem.

The Trump administration should craft a more comprehensive approach that undermines Iran's ability to recruit, train, and deploy operatives. A good place for the United States to start would be to halt its sudden withdrawal from Syria, which would likely benefit Iran and its partners. One of the most effective bulwarks against further Iranian expansion inside of Syria, especially in the country's northeast, has been the presence of the Syrian Democratic Forces, until recently backed by U.S. special operations forces. Without this deterrent, Iran can operate unchecked, resupplying proxies and securing territory that will further empower the Islamic Revolutionary Guard Corps (IRGC).

Similarly, the United Nations' arms embargo on Iran is set to expire one year from now, in October 2020. Although it targets the Iranian nuclear program, the embargo also contains certain bans on items that could be used in the missile program, which is a particular source of concern as Tehran increasingly supplies more precise missiles and rockets to its proxies. Under the existing nuclear deal, the embargo is supposed to be lifted next year, along with a travel ban on the commander of the IRGC's Quds Force, Qassem Suleimani, who is responsible for coordinating Tehran-proxy relations.

Washington and its European allies share an interest in preventing the flow of weapons transfers to Iranian proxies, but they have differences of opinion over how to pursue that goal. In pursuit of consensus, Washington will likely have to forgo its current maximalist positions on Iran's missile program. U.S. interests would be better served by pursuing more attainable changes to the embargo, focused on stopping Iran's proliferation of missiles and missile technology to proxies.

More generally, the Trump administration should recognize the diversity of Iran's regional proxies and understand that they can't be uniformly disrupted by damaging the Iranian economy. Hezbollah fighters are different from the Houthis, and the Shiite groups in Iraq are different in many ways from Afghan and Pakistani militias operating in Syria. These forces have differing capabilities and objectives, with Tehran exercising varying levels of command-and-control, which is why a one-size-fits-all approach is destined to fail. A strategy to counter Hezbollah would have to strangle the group's vast global criminal portfolio, while the most effective way to counter the Houthis likely involves forging a political settlement in Yemen. And any strategy that tries to disrupt the flow of Afghan recruits to Syria must consider the implications of a precipitous U.S. withdrawal from Afghanistan.

Financial sanctions are an important part of any counterterrorism strategy. But they aren't enough. And the sooner the Trump administration realizes this, the sooner Iran's growing influence can be halted.

This commentary originally appeared on Foreign Policy on October 16, 2019. Commentary gives RAND researchers a platform to convey insights based on their professional expertise and often on their peer-reviewed research and analysis.