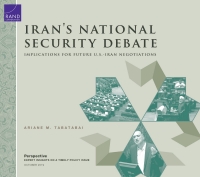 Despite significant limits on acceptable speech in Iran, national and elite debates can be vigorous. They often include voices from across the political spectrum of opinions permitted by the regime. Domestic debates on key issues play a critical role in framing, molding, and selling foreign and security policies. However, in the United States, the nuances of these debates are often lost in a busy news cycle and drowned out by the regime's bombastic rhetoric, which has come to define Iran's image over the past four decades. This October 2019 Perspective details how Iran's domestic debates affect key foreign policy and national security issues, including the country's posture on the international stage and vis-à-vis the United States. Understanding areas of both consensus and division among Iran's elite is critical to developing a realistic policy toward Iran, particularly during this time of growing tension with the United States. Areas of consensus among Iranian elites indicate regime redlines; disagreements among regime elites could offer opportunities in future negotiations involving Iran, the United States, and other members of the international community. Based on Iran's internal divisions, the areas that appear most conducive for compromise include the technical details of Iran's missile program, Iran's regional activities (particularly in countries deemed less essential to national security, such as Yemen), and increased transparency in the Iranian economy.

This project is a RAND Venture. Funding was provided by gifts from RAND supporters and income from operations. The research was conducted by the Center for Middle East Public Policy (CMEPP) within RAND International Programs.