The Syrian Withdrawal: Where Things Stand 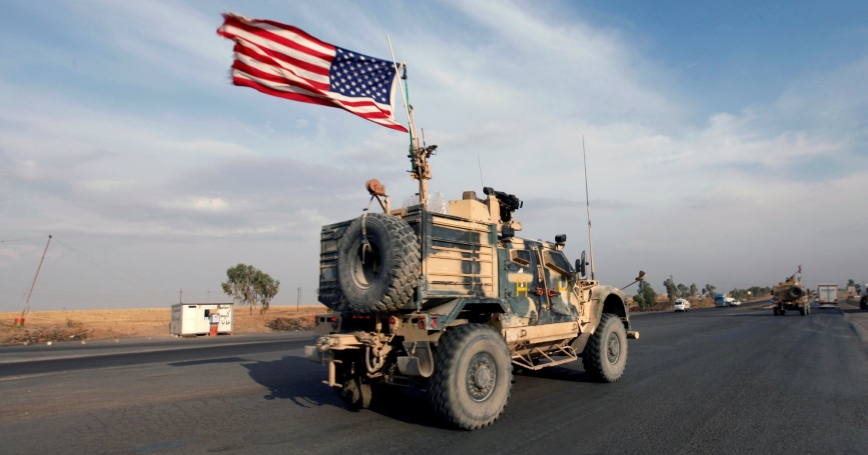 A convoy of U.S. vehicles is seen after withdrawing from northern Syria, in Erbil, Iraq, October 21, 2019

There are two distinct grounds to criticize President Trump's decision to withdraw U.S. forces from Syria.

One is the opening the withdrawal provides for Russia, along with the regime of Syrian President Bashar Assad and the government of Iran, to displace the United States in eastern Syria.

The second criticism relates to the sudden and unprepared nature of the pullout, which abruptly left the Kurds—an American partner—to fend off a Turkish assault.

These errors are owed to the Trump administration's inability to transition from a military mission of defeating the ISIS terrorist group to a mission designed to forge a political accommodation in northeast Syria.

The American partnership with the Kurds was always transactional—the least bad of several alternatives. No other regional force was willing and able to work with the United States to eliminate the ISIS territorial base—its so-called caliphate.

The Kurds were the only regional force willing and able to work with the United States to eliminate ISIS's so-called caliphate.

But neither Presidents Barack Obama nor Trump ever endorsed the Kurdish aspiration to create an independent state on the liberated territory.

Kurdish leaders have consistently hedged their bets, never fully breaking with the Assad government, tolerating small Syrian Army garrisons in a couple of towns under Kurdish control, and allowing certain civil functions of the Syrian state to continue throughout their domain.

Once the last ISIS strongholds had fallen in late 2018, President Trump ordered a U.S. withdrawal. Secretary of Defense James Mattis resigned in protest. The president was eventually persuaded to cut the number of U.S. troops in Syria in half, rather than end the American military presence in Syria entirely.

Trump's advisers hoped that this residual commitment could be sustained at least until a reformed government was in power in Damascus and Iranian forces had departed Syria. But there was never the slightest prospect of those things happening anytime soon—and certainly not during President Trump's current term of office.

Neither Turkey nor Syria appeared likely to tolerate an independent Kurdish state. Unless the United States was prepared to stay indefinitely, the Kurds were going to have to come to an accommodation with one or the other.

U.S. officials tried to arrange an accommodation with the Turks, but this neither satisfied Ankara nor permitted a U.S. withdrawal. So ten months after his initial withdrawal directive, Trump reissued the order—and this time he meant it.

It was, in retrospect, a mistake for U.S. officials to have believed and encouraged the Kurds to believe American forces would remain indefinitely.

Clearly, those American officials wished to avoid the expansion of Syrian government, Russian and Iranian influence. They also rightly feared that an early U.S. exit could enable an ISIS comeback. But their first consideration could have been the well-being of their recent allies in the ISIS fight.

Even if cynics say the United States has no moral responsibility to the Syrian Kurds, such clear abandonment could make it that much harder for Washington to recruit the next local partner when the inevitable need arises.

Even if cynics say Washington has no moral responsibility to the Kurds, such clear abandonment could make it harder to recruit the next local partner when the inevitable need arises.

Forced to choose between a Turkish occupation and the return of the Syrian state, the Kurds predictably chose the latter. But they made this choice under the worst possible conditions, facing an ongoing Turkish invasion and a precipitous American pullout.

Had the Kurds initiated talks with the government in Damascus after Trump's initial withdrawal directive, they could have achieved better conditions and the United States could have pursued a more orderly and honorable departure. Such an arrangement might also have better assured continuing control of thousands of ISIS prisoners.

Instead, the Kurds were faced with cutting a deal with the Syrian government at their time of greatest need, limiting their leverage and thus future autonomy.

The real choices before the Trump administration in eastern Syria were: staying indefinitely; preparing an orderly exit, thereby opening the way for the return of the Syrian state and its allies; or leaving suddenly without warning.

Lacking an orderly process for planning and executing national security decisions, the Trump administration ultimately defaulted to the worst of these alternatives.

It seems unlikely that Trump can be persuaded to revert to the first option—staying indefinitely. However, the five-day cease-fire arranged between Vice President Mike Pence and the Turkish government may offer an opportunity to slow the U.S. withdrawal, assure that control of Islamic State prisoners is maintained, and provide the Kurds some breathing room to negotiate the best deal they can get from Assad and the Russians.

James Dobbins is a senior fellow and distinguished chair in Diplomacy and Security and Jeffrey Martini a senior political scientist with the nonprofit, nonpartisan RAND Corporation.

This commentary originally appeared on Fox News on October 21, 2019. Commentary gives RAND researchers a platform to convey insights based on their professional expertise and often on their peer-reviewed research and analysis.