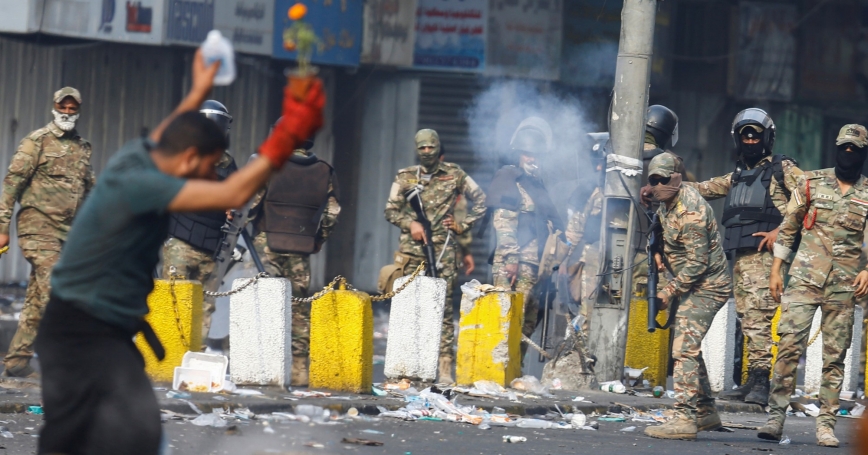 A demonstrator reacts as he walks in front of Iraqi security forces during ongoing anti-government protests in Baghdad, November 14, 2019

As protests in Iraq grow, a “good news” narrative seems to be developing with them. The protests, this story goes, are a significant blow to Iranian influence, demonstrating that the Iraqi public is tired of Tehran's interference in its country's affairs. U.S. Secretary of State Mike Pompeo said as much in a recent tweet. Evidence cited for this argument includes the fact that Iranian-backed Shiite militias have been implicated in violence against protesters and that the demonstrators' slogans include “Iran out, out.” Iran, in other words, could feel some blowback when the demonstrations culminate in a reckoning.

Although appealing to Americans, whose blood and treasure has only resulted in increased Iranian influence in Iraq after a decade and a half of war, this narrative is faulty. It is the product of seeing events through a single lens: U.S.-Iranian competition in the Middle East. To be sure, after tacit alignment in the fight against the Islamic State over the past five years, the United States and Iran have once again entered an era of competition in Iraq. But the bigger story is not who is up and who is down between Washington and Tehran; it is that yet another Arab public has taken to the streets demanding change.

Mass protests have rocked the Middle East and North Africa 10 other times since late 2010: in Tunisia, Libya, Bahrain, Syria, Yemen, Algeria, Sudan, twice in Egypt, and, contemporaneously with the Iraqi demonstrations, in Lebanon. And a little before that wave of uprisings, huge rallies struck Iran itself, during the Green Movement in which Tehran developed and tested many of the tactics it has since employed (or taught to its surrogates in the rest of the region) to crush opposition. The jury is still out on a couple of these uprisings, but with the exception of Tunisia, the outcomes are categorically negative in all the others. So into the cauldron goes Iraq, but what emerges is an open question.

As Americans watch the events unfolding there, it's tempting to focus on what appears as good news coming out of a country often associated with bad memories. And for the Trump administration, which has designed much of its regional policy around the objective of countering Iran, the protests seem to complement its own maximum pressure campaign to shrink Iranian influence. But Washington would do well to focus less on Iran and more on its own vulnerabilities. When the prominent Shiite cleric Ayatollah Ali al-Sistani clarified his own position on the unrest, he warned Iraqis against the protests “becoming an arena for score settling between some international and regional countries” (read Iran and the United States).

The bigger story is not who is up and who is down between Washington and Tehran; it is that yet another Arab public has taken to the streets demanding change.

Reporting is quick to show that the protests are anti-sectarian. Put in an affirmative way, the protesters are driven by Iraqi nationalism. And one of the most important players attempting to exploit such sentiments is the Iraqi nationalist par excellence, Muqtada al-Sadr. Iraqi nationalism is not generally associated with good tidings in the Middle East. In fact, it was a key driver behind the Iraqi decision to invade neighboring Iran in 1980 and to repress Iraqi Kurds throughout that decade (including by using chemical weapons). Mitigating the nefarious effects of Iraqi nationalism became the main preoccupation of the United States in the 1990s. Iraqi nationalism leaves the U.S. ability to operate in that country just as exposed as the protests leave Iran's presence.

If Iraqi Prime Minister Adil Abdul-Mahdi is removed from office, as those on the streets are demanding, there are a couple of leading scenarios of what will follow. The first is an impasse, since the two largest parliamentary blocs—Sairoun and Fatah—disagree on the fate of the prime minister, among many other things. That will make building a successor government an exceedingly difficult task. Recognizing as much, Abdul-Mahdi's survival strategy is to make his resignation conditional on the two sides coming together to nominate a new government first. In effect, he is betting they cannot, and he may yet be right.

If Abdul-Mahdi is forced out, whether with a successor government in place or not, there is nothing to suggest that the next government will be closer to the United States than Iran. For example, Abdul-Mahdi's most natural successor may be Sadr, who was the leading vote-getter in the 2018 elections. Sadr has long pressed for the removal of U.S. forces from Iraq. The second leading vote-getter was an Iranian-supported bloc, whose members include people who waged attacks on U.S. forces in the late 2000s in an effort to drive them from Iraq. There are lesser parties that value the training and equipping provided by U.S. forces. But it takes a leap of faith to see that mélange coming together to produce a pro-American outcome.

To highlight the risks in what is happening in Iraq is not to deny the legitimate demands of the protesters or wish away the shortcomings of Iraq's current political class. The protesters have identified real problems with their own ruling elites, including corruption, loyalty to sect over loyalty to country, and the lack of economic opportunity they have presided over. And they have accurately recognized Iran's role in exacerbating many of these challenges, including by tampering with Iraqi sovereignty and encouraging sectarianism. But it is foolish to believe that, if they succeed in their effort to drive Abdul-Mahdi from power, they will also throw the Iranians out by their ears, accomplishing U.S. objectives. That is a fantasy.

Jeffrey Martini is a senior researcher and Ariane Tabatabai is an associate political scientist at the nonprofit, nonpartisan RAND Corporation.

This commentary originally appeared on Foreign Policy on November 13, 2019. Commentary gives RAND researchers a platform to convey insights based on their professional expertise and often on their peer-reviewed research and analysis.