Vietnam Needs to 'Struggle' More in the South China Sea 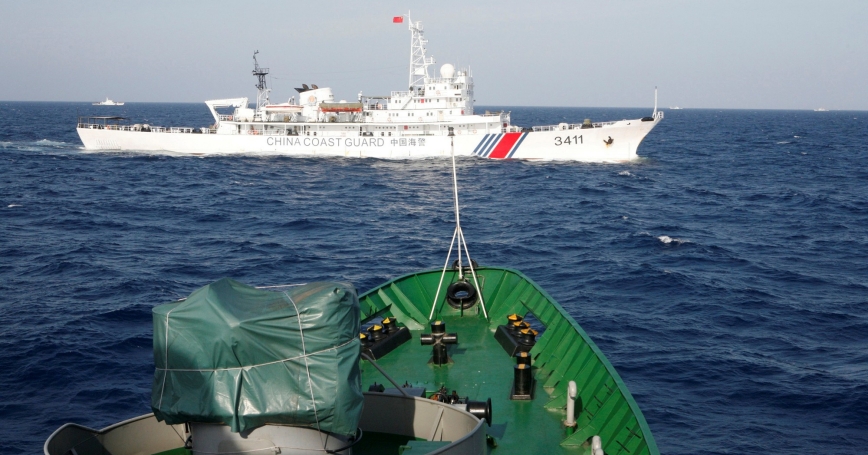 A Chinese Coast Guard ship from the bow of a Vietnam Marine Guard ship in the South China Sea, near Vietnam, May 14, 2014

Now that the months-long standoff between China and Vietnam has finally ended at the disputed Vanguard Bank, it makes sense to take stock of how Hanoi's security strategy fared in countering Chinese coercion in the South China Sea. Vietnam seeks simultaneous “cooperation and struggle” with all countries—including, most significantly, China—in a highly calibrated and nuanced approach to secure Vietnamese national interests.

During the Vanguard Bank standoff, Vietnam employed vintage “cooperation and struggle” strategy. Starting in July, Beijing sent the geological survey ship Haiyang Dizhi 8 and armed coast guard escorts to force an end to Hanoi-sanctioned foreign drilling operations via the Hakuryu-5 oil rig near the Spratly Islands. Hanoi kept quiet for nearly two weeks, but soon it became clear that Beijing was not leaving.

Over the next two months, the Vietnamese foreign ministry issued a series of escalatory statements that identified “China” by name as the aggressor and demanded that China “IMMEDIATELY STOP [all caps in original]” the camping out near Vanguard Bank and zigzagging throughout Vietnam's exclusive economic zone (EEZ). Additionally, Hanoi extended drilling operations, from July 30 to September 15, and saw the Chinese presence persist throughout this time and beyond as well. By October, top Vietnamese leaders began speaking out.

General Secretary and President Nguyen Phu Trong's statement on October 15 was the epitome of “cooperation and struggle.” Leaving the door open for reconciliation, Trong called for sustaining a peaceful, stable environment for national development. Simultaneously he pledged to “never concede the issues of sovereignty, independence, unification and territorial integrity.”

Examples of cooperation during the Vanguard Bank dispute are numerous. Hanoi, for instance, reportedly attempted to engage Beijing at least 40 times. It also authorized Minister of National Defense Ngo Xuan Lich to attend China's Xiangshan Forum, a multinational security event that promotes Beijing's claim to the South China Sea. Vietnam also insulated other areas of the bilateral relationship from being harmed. This even included the second annual joint coast guard patrols of the previously delimited Gulf of Tonkin, which would seem relevant to protesting Chinese maritime policy.

By October 23, the Haiyang Dizhi 8 departed Vietnam's EEZ and steamed toward Chinese shores. Observers might claim Hanoi “won” because it “stood its ground,” but such analysis is premature and likely inaccurate.

For one thing, Beijing challenged the presence of Hakuryu-5 until the very end. Only after it was removed did Beijing pull back the Haiyang Dizhi 8. China appeared ready to stay for the long haul. For instance, the Haiyang Dizhi 8 seemed to be exiting the area in August, but then refueled at the Chinese-controlled Fiery Cross Reef in the Spratly Islands and returned. Beijing's artificial islands hosting military infrastructure enable patrols that can outlast any territorial rivals.

A quick look back at how another China-Vietnam standoff ended is also telling. In May 2014, Beijing placed the Haiyang Shiyou 981 oil rig in disputed waters off the coast of the Paracel Islands. After a series of clashes—including vessels ramming and threatening each other—Beijing removed its oil rig. Publicly, China claimed operations finished ahead of schedule. More likely, Beijing was concerned about international condemnation, particularly from the Association of Southeast Asian Nations (ASEAN (PDF)) and Washington.

Optics seem to matter much less to Beijing nowadays. According to a recent conversation I had with a Vietnamese interlocutor, Hanoi expected Beijing to back down at Vanguard Bank before the 70th anniversary of the founding of the People's Republic of China, for fear of tarnishing that major event. But even a stern warning from the United States condemning China's “bullying behavior” did not make Beijing budge. Indeed, China doubled-down when it refueled the Haiyang Dizhi 8 and sent it back to Vanguard Bank.

The “cooperation” part of Vietnam's strategy was, at best, neutral and at worst counterproductive. As for “struggle,” naming and shaming China accomplished nothing.

Hanoi's “cooperation and struggle” strategy seems to have been lacking this time around. “Cooperation” was, at best, neutral and at worst counterproductive because compartmentalized bilateral relations allow business as usual despite Chinese transgressions. As for “struggle,” naming and shaming China accomplished nothing.

So what does this portend for the future of Vietnamese strategy? Hanoi could consider invigorating its struggle—without disrupting the delicate “cooperation and struggle” balancing act—by elevating its ties with Washington to a “strategic partnership.” Such an announcement would signal that Vietnam and the United States have mutual long-term strategic interests—implicitly to challenge China. Hanoi could still cooperate with China, but Beijing would know that future South China Sea crises might draw more than rhetorical involvement from Washington.

Hanoi could also continue to grow and deepen its web of defense ties with ASEAN countries, Australia, Japan, and India. Getting those countries to speak up during the next crisis—none did so this time—will be a challenge, but not impossible. One way of securing their support is for Hanoi to be more open in discussing its security challenges and how to deal with them together.

The major hindrance to this approach is Vietnam's “Three Nos” defense policy: no alliances, no bases, and no working with a second country against a third. But Vietnam has quietly found ways to get to “yes” in the recent past. For example, in May 2018, it exercised with India, and is conducting a wide range of military activities with Washington without the “alliance” title. If Hanoi wanted to send China a truly stern message, it could join the Quadrilateral Security Dialogue, or “Quad,” as dialogue partner with the United States, Australia, India, and Japan. That, however, is almost certainly a bridge too far for Hanoi.

On the milder end of the “struggle” spectrum, Vietnam has a plethora of options. It could stop censoring local news stories about China-Vietnam fishing boat clashes to whip up public resentment and threaten Chinese business interests in Vietnam. It could, like the Philippines did, sue China in international court over its excessive South China Sea claims. Hanoi could drive a hard bargain during Code of Conduct negotiations as the ASEAN chairman, and highlight Chinese transgressions as a non-permanent member of the United Nations Security Council—two positions it will hold in 2020. It could also simply cooperate less, indicating that Beijing's assertive behavior has put the entire relationship at risk.

Against an increasingly confident and assertive Beijing, it may be time for Vietnam to consider a careful recalibration to allow for more “struggle” and less “cooperation.”

This commentary originally appeared on The Diplomat on November 15, 2019. Commentary gives RAND researchers a platform to convey insights based on their professional expertise and often on their peer-reviewed research and analysis.