With Chaos in the Streets of Iran, Here's How the United States Could Help the Iranian People 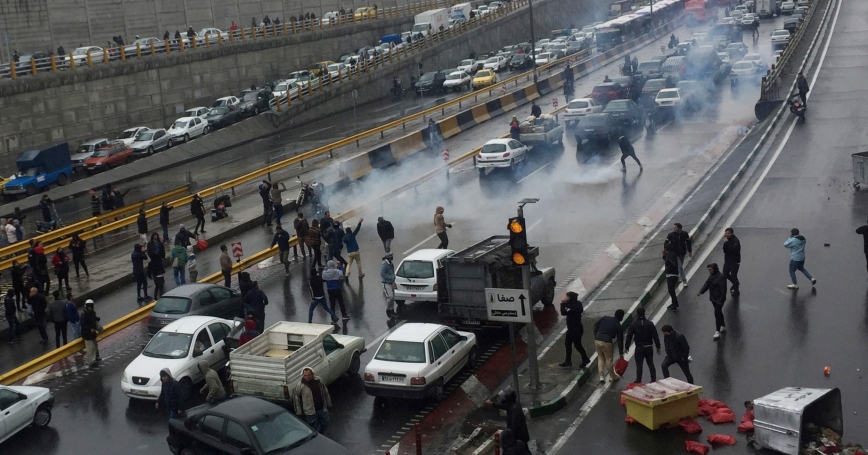 Iranians protest against increased gas prices, on a highway in Tehran, November 16, 2019

Once again Iranians have flooded their country's streets to participate in widespread protests sparked by gasoline price hikes, only to be met by a brutal crackdown. But clearly the unrest was about more than the price of gas, reflecting deeper frustration and anger over the general economic malaise caused by a corrupt, repressive government and punishing U.S. sanctions.

During the protests, American officials, including Secretary of State Michael R. Pompeo, took to Twitter to express solidarity with the Iranian protesters, even tweeting in Persian and encouraging the reporting of human rights abuses by government officials engaging in violent crackdowns.

The Trump administration could lift its reinstatement of secondary sanctions against Iran that were imposed following its unilateral withdrawal in 2018 from the Iran nuclear agreement. While the intention of the sanctions may have been to bring Iran back to the negotiating table for a better deal, a new agreement has yet to result.

Beyond rhetorical support, there are a number of concrete steps the U.S. could take if concern for the Iranian people is a genuine priority, as it should be.

Moreover, the administration's “maximum pressure” campaign of unprecedented economic sanctions against Iran has hurt the Iranian people more than the Iranian leadership.

Iranian leaders have ratcheted up aggressive regional policies in response to U.S. pressure that has severely curtailed Iranian oil exports—including the brazen attack against state oil company Saudi Aramco facilities in September and the shooting down of a U.S. military drone in the Strait of Hormuz in June.

Meanwhile, the pressure is contributing to soaring inflation and unemployment in Iran. The devaluing of the Iranian currency is eroding the savings of average Iranians and leading to prohibitively high living costs. The sanctions are also having serious humanitarian consequences. Human rights reports suggest that, despite exemptions for humanitarian imports, the banking restrictions caused by U.S. sanctions are preventing Iran from financing such imports, leading to shortages of drugs to treat rare diseases and multiple forms of cancer.

The United States could change course and allow the rest of the world to conduct commercial and financial transactions with Iran. Easing up on secondary sanctions against close American allies in Europe and Asia could also create a more supportive international environment for stepping up pressure should Iran further renege on its nuclear commitments, particularly since Iran would have no justification for doing so if it continued to receive the economic benefits promised in the original agreement.

While some in the Trump administration may still be hoping that enough economic pressure will lead to the collapse of the regime, trying a different approach may improve the prospects for a new negotiation process with Iran, which Trump has at times appeared to support.

The administration also could lift the travel ban on Iranians who wish to come to the United States. The ban has proved to be one of the most destructive policies harming average Iranians, many of whom have been unable to see family members or seek medical care in the United States because of the restrictions. The ban has also reduced the ability of Iranian students to seek an education in the United States, exactly the type of next-generation Iranians who could help foster a more positive U.S.–Iranian relationship in the future. While the travel ban is supposed to exempt Iranians seeking student and nonimmigrant visas, many such applicants have been blocked from entering the country.

In addition, the travel ban and related policies have begun to chip away at traditionally positive views of the United States, with recent polling showing that 86 percent of Iranians now view the United States unfavorably. If helping the Iranian people is a key objective, lifting the travel ban would be one of the most important steps this administration could take—for both humanitarian and interest-based reasons.

If helping the Iranian people is a key objective, then lifting the travel ban would be one of the most important steps the Trump administration could take.

Finally, in an attempt to close off Iranians from communications inside and outside the country, the Iranian government shut down the internet for five days after public protest began in mid-November, a drastic move meant to quell the protesters' ability to organize against the government. And yet the Iranian leadership maintained access to the internet during the shutdown. The United States imposed property-based sanctions on the Iranian information minister because of the shutdown, but in the absence of broader U.S. support for Iranians, the step is likely to be seen as a mere gesture that will not fundamentally alter Iranians' access to the outside world.

Efforts by the State Department to encourage unhindered Iranian access to the internet, including supporting efforts of ordinary Iranian citizens to circumvent these restrictions on access to information, is a move in the right direction, particularly if pursued in tandem with other measures to relieve pressure on the Iranian people.

Iranians are protesting for better governance that would make the welfare of the Iranian people a priority over the government's costly regional meddling and the enrichment of entrenched leaders. For this reason, Iranians deserve American support.

Instead, current U.S. policies are hurting the cause the Iranian people are fighting for while failing to achieve any strategic objectives. If the United States pursued policies aimed at creating a better future for the Iranian people, they may have the added benefit of producing less dangerous Iranian government policies than those we have seen under the mantra of maximum pressure.

This commentary originally appeared on Los Angeles Times on December 3, 2019. Commentary gives RAND researchers a platform to convey insights based on their professional expertise and often on their peer-reviewed research and analysis.