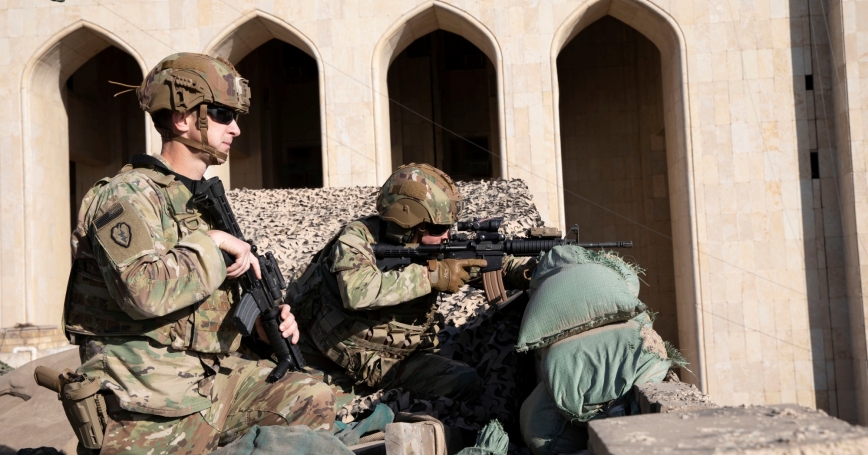 In a speech Sunday, President Trump said there would be serious repercussions if Iraq expelled U.S. armed forces following the killing of the commander of Iran's elite Quds Force, Qasem Soleimani. He said the United States would demand that Iraq repay money spent on a major air base, and he threatened that Washington would “charge them sanctions like they've never seen before, ever. It'll make Iranian sanctions look somewhat tame.”

Iraqi Prime Minister Adel Abdul Mahdi called the attack that killed Soleimani “a massive breach of sovereignty” and a “clear breach of the terms of the American forces' presence.” On Sunday, the Iraqi parliament voted 170 to 0 (with nearly 150 Kurdish and Sunni lawmakers abstaining) to expel the approximately 5,000 U.S. troops in Iraq. Although this was a nonbinding resolution, it further politicized the U.S. show of violence and likely portends the end of the U.S. military presence in Iraq. We are set for a heated debate between Iraq and the United States over the U.S. military presence and whether it ought to continue.

What Status and Rights Do U.S. Troops Have in Iraq?

U.S. troops returned to Iraq in 2014 at the invitation of the Iraqi government to combat the Islamic State of Iraq and Syria (ISIS) only three years after U.S. forces withdrew because Washington and Baghdad could not agree on the terms governing their legal status. The Iraqis desperately needed U.S. assistance to defeat ISIS. Still, the presence of American forces was controversial due to the legacy of the U.S. invasion in 2003. Many Iraqis saw U.S. troops as “occupiers” and felt that their presence infringed on Iraq's sovereignty. Attuned to these sensitivities, Abdul Mahdi has insisted that there are no U.S. bases in Iraq but that U.S. military advisers are guests at Iraqi bases and that once ISIS is defeated, no U.S. combat troops will remain.

There is no treaty or status of forces agreement (SOFA) authorizing the presence of U.S. troops in Iraq.

In early 2019, a coalition of pro-Iranian Iraqi groups tried to expel U.S. forces after a series of perceived American transgressions. In December 2018, an unannounced visit by President Trump to al-Asad Air Base was interpreted by some Iraqis as yet another sign of disrespect for Iraqi sovereignty. Then in February, Trump stated that U.S. forces would remain in Iraq to “watch Iran.” This was unpopular and out of step with the Iraqi government's stated policy. In October 2019, Iraqi officials contradicted a unilateral U.S. announcement that American forces withdrawing from Syria would stay in Iraq.

There is no treaty or status of forces agreement (SOFA) authorizing the presence of U.S. troops in Iraq. The American military presence is informal and at the pleasure of the Iraqi government, which means that the government can rescind this invitation at any time. Yet it is not clear that the Iraqi parliament has the authority to eject the U.S. forces. This vote was nonbinding, and the Iraqi caretaker government cannot pass laws, but the vote does indicate that a majority in parliament wants U.S. forces to leave, and that makes such an outcome increasingly likely.

The U.S. Has Basing Agreements in Many Other Countries

Most post-World War II American bases overseas were obtained through voluntary arrangements with other nations. While these agreements varied significantly in form, substance, and scope, the host nation legally consented to the presence of U.S. troops on its soil, usually in return for security or compensation. In the 1940s and 1950s, basing agreements overwhelmingly favored the United States, granting it extensive rights and considerable freedom of action. Over time, host nations renegotiated the terms of these agreements, often limiting the size of the U.S. presence, the type of forces permitted, and the U.S. jurisdiction over facilities and personnel.

Between 1950 and 2014, 16 host nations inserted a clause that obligated the United States to consult with them, or obtain their explicit approval, before using their bases for a non-routine operation. For instance, the 2009 SOFA with Iraq (PDF) specified that all military operations had to be approved by the Iraqi government.

Not every basing agreement explicitly requires host nation approval of contingency operations, but in reality this is almost always necessary.

Although not every basing agreement explicitly requires host nation approval of contingency operations, in reality this is almost always necessary. As Alexander Cooley and Hendrik Spruyt have noted, basing agreements are “incomplete contracts” that are often underspecified and always subject to renegotiation or abrogation.

Moreover, historically when the United States has ignored a host nation's wishes or acted unilaterally, it usually has caused blowback. The Eisenhower administration deployed forces to Incirlik, assuming that Turkey would gladly serve as a staging base for the 1958 Lebanon intervention. But this approach proved to be counterproductive in the long term. While Ankara did not restrict U.S. access during the operation, afterward it limited U.S. base rights.

In 1975, the Ford administration disregarded the Thai government's prohibition on using its air bases to rescue the SS Mayaguez, a U.S. merchant vessel hijacked by the Khmer Rouge. Although the United States recovered the ship and crew, its blatant disregard for Thai sovereignty incited anti-U.S. base protests that prevented pro-American Thai officials from extending the U.S. military presence as they desired. The last U.S. troops left Thailand in the summer of 1976.

There are notable similarities between Thai politics during the Mayaguez incident and Iraqi politics today. Both countries were immature democracies with polarized societies that were selecting a new government. In this context, politicians often rely on anti-base sentiment to gain public support. But this dynamic can spiral out of control, forcing them to follow through on threats to remove foreign forces, even if they do not really want to.

Whether Iraq ultimately evicts U.S. forces or not, this attack has already had consequences for U.S. operations against ISIS, which were “paused” Sunday to strengthen American defenses in anticipation of Iranian reprisals. This suspension might enable ISIS to reconstitute its fighter networks and to once again pose a serious threat to Iraqi security.

Stacie L. Pettyjohn is the director of Project AIR FORCE's Strategy and Doctrine Program and the co-director of the Center for Gaming at the nonprofit, nonpartisan RAND Corporation.

This commentary originally appeared on The Washington Post on January 6, 2020. Commentary gives RAND researchers a platform to convey insights based on their professional expertise and often on their peer-reviewed research and analysis.