Why Is China Pressing Indonesia Again Over Its Maritime Claims? 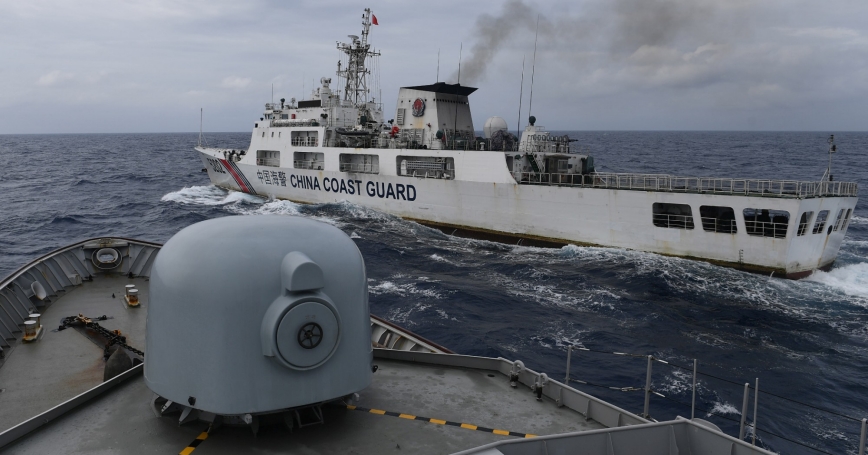 China Coast Guard ship seen from an Indonesian Naval ship during a patrol north of the Natuna Islands, Indonesia, January 11, 2020

China sparked a major maritime confrontation with Indonesia near the South China Sea last month when dozens of Chinese fishing vessels, along with a coast guard escort, entered waters off the Natuna Islands, which are within Jakarta's exclusive economic zone but are also claimed by China. Indonesian authorities responded swiftly, summoning China's ambassador on Dec. 30 to lodge a protest and subsequently dispatching warships and F-16 fighter jets to patrol the region. Beijing initially refused to back down, as a Foreign Ministry spokesperson on Dec. 31 stated unequivocally that “China has sovereign rights and jurisdiction over relevant waters near the Nansha Islands,” using the Chinese name for the nearby Spratly Islands, where China has built several military installations on reclaimed land.

Jakarta called upon its own fishing vessels to relocate to the Natuna Islands to compete with Chinese fishermen. And on Jan. 6, President Joko Widodo, or Jokowi, as he is widely known in Indonesia, declared there would be “no compromise” on “our nation's territorial sovereignty.” He visited the Natunas two days later to demonstrate his point.

Tensions appear to have subsided for now, as the acting local governor in the islands stated last Sunday that Chinese ships had pushed further out to the edge of Indonesia's exclusive economic zone. But the situation may not hold, as Chinese vessels could still return to Indonesian waters. Regardless, difficult longer-term questions remain about China's assertive behavior in the Natunas, and more broadly in the South China Sea. Most significantly, what drove Beijing to stake out its sovereignty claims against Indonesia at this particular time? And what can Indonesia and other regional neighbors expect of Chinese behavior going forward?

What drove Beijing to stake out its sovereignty claims against Indonesia at this particular time? And what can Indonesia and other regional neighbors expect of Chinese behavior going forward?

Beijing's geopolitical calculus remains opaque. It has never fully defined the southern reaches of its expansive sovereignty claims in the South China Sea, demarcated on maps by its so-called nine-dash line that covers most of the area. It is nevertheless clear from this recent incident, as well as past skirmishes with Indonesia in 2016 that also occurred near the Natuna Islands, that China believes the area is part of its territorial waters.

Unlike in 2016, however, Beijing is now able to make better use of militarized outposts throughout the South China Sea to enable more routine and longer-lasting patrols of its sovereignty claims. It may have seen an opportunity in the Natuna Islands to exploit these new advantages. Indonesia's Natuna Islands lie approximately 700 miles to the southwest of China's Spratly outposts, placing them well within range of not only Chinese naval and coast guard ships, but also air force patrols originating from China's artificial islands. In a recent illustration of how new Spratly installations now enable sustained operations in nearby waters, Beijing over the summer had seemingly withdrawn its geological survey ship, the Haiyang Dizhi 8, from a maritime standoff with Vietnam at Vanguard Bank in the Spratlys, but then returned after stopping at the nearby Chinese facility at Fiery Cross Reef, probably to resupply.

As for the timing of its provocation, China is likely testing Jokowi's administration early on in his second term. He was reelected in May 2019 and has brought in a number of new personalities to fill key Cabinet positions on maritime security. One of them is Defense Minister Prabowo Subianto, who ran against Jokowi as president and has hawkish views on China. During the latest standoff, however, Prabowo was conspicuously silent, perhaps because he had just returned from a three-day visit to Beijing during which he discussed defense cooperation with his Chinese counterparts.

Another key official is Jokowi's new maritime affairs and fisheries minister, Edhy Prabowo. He replaced the well-liked Susi Pudjiastuti, who took a hard-line approach to China during the 2016 dispute over the Natuna Islands. Edhy has pledged to follow in her footsteps, but is untested, so Beijing may have wanted to gauge his response in a crisis.

Beyond these personalities, China probably assessed that Jokowi's pledge to look beyond Indonesian shores at external threats—inherent in the maritime strategy he outlined in 2014, billed as the “Global Maritime Fulcrum”—would be overshadowed by domestic concerns. Beijing also seems to have been betting that Indonesia would be unwilling to disrupt bilateral relations because of the Natunas standoff. For example, China's Foreign Ministry spokesman, Geng Shuang, noted on Jan. 7 that Indonesia would ultimately “bear in mind the bigger picture of bilateral relations and regional stability, properly resolve differences with China, and foster favorable atmosphere and conditions for celebrating the 70th anniversary of our diplomatic ties.”

Geng conspicuously referenced China's major infrastructure investment scheme, the Belt and Road Initiative, not so subtly implying that Jakarta might be jeopardizing the significant benefits it receives from this program, and Chinese investment more broadly, if it escalated the situation over the Natuna Islands. Indonesia received approximately $3.6 billion in Chinese investment in the first half of 2019, and the Belt and Road Initiative is funding several major infrastructure projects in the country, as well as the relocation of the capital from Jakarta to East Kalimantan on the island of Borneo.

What is curious about China's recent decision to reignite tensions over the Natuna Islands is that it seems highly counterproductive to Beijing's own diplomatic goals. China is involved in long-running negotiations with the Association of Southeast Asian Nations to conclude a Code of Conduct aimed at managing disputes in the South China Sea. But while part of China's maritime claims overlap with Indonesia's exclusive economic zone, Jakarta has long maintained the position of not officially being a claimant in the ASEAN negotiations, as it does not consider the waters surrounding the Natuna Islands to be part of the South China Sea. As a non-claimant, Jakarta had little reason to fully cooperate with ASEAN claimants like Brunei, Malaysia, Vietnam and the Philippines in their pursuit of a legally binding Code of Conduct by 2021. But recent tensions around the Natuna Islands may well drive Jakarta to pivot in their favor. The chair of ASEAN in 2020, Vietnam, is already frustrated by its own recent standoff with China at Vanguard Bank, so alienating yet another powerful ASEAN member state could prove to be a foolish mistake for Beijing.

At least for the time being, however, these concerns do not seem to have registered for China as being more important than its desire to assert its expansive territorial claims. Countries in the Indo-Pacific should prepare for Beijing to continue challenging any of its neighbors that it perceives as standing in its way of Chinese expansion in the South China Sea.

This commentary originally appeared on World Politics Review on January 16, 2020. Commentary gives RAND researchers a platform to convey insights based on their professional expertise and often on their peer-reviewed research and analysis.