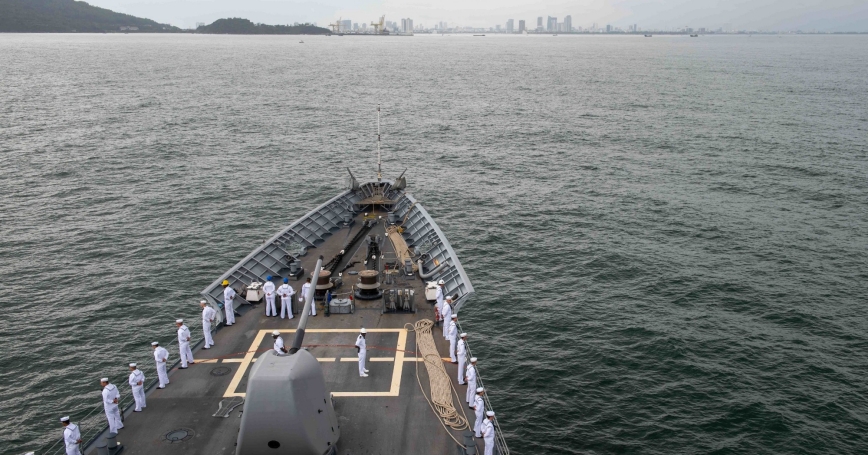 For the second time in the last three years, the United States on March 5 sent an aircraft carrier to Da Nang, Vietnam, in a further display of goodwill and deepening security ties between the former adversaries. Upon the arrival of the USS Theodore Roosevelt, U.S. Ambassador Daniel Kritenbrink noted that “Visits like these not only strengthen the United States' partnership with Vietnam, but they also continue to ensure peace and stability and freedom of commerce across the region.”

Of course, parenthetically, Ambassador Kritenbrink was referring to securing the Indo-Pacific from China's growing economic and military power. Within the context of Vietnam, this means helping Hanoi cope with Beijing's increasingly assertive approach toward disputed sovereignty claims in the South China Sea. Viewed through this lens, the budding security partnership between Washington and Hanoi is aimed at deterring Beijing from harassing Vietnam within its exclusive economic zone (EEZ), as it did most recently at Vanguard Bank in the westernmost Spratly Islands.

China is well aware of U.S.-Vietnam moves, and yet its public reaction to the USS Theodore Roosevelt—as was the case during the visit of the USS Carl Vinson in 2018—can be summed up in one word: unfazed. Chinese commentaries since the visit have projected supreme confidence that U.S.-Vietnam security ties, no matter how close they get, will never rival the China-Vietnam partnership.

For example, writing for Global Times, Cheng Hanping of Nanjing University argued: “The United States and Vietnam have extremely different ideologies, and they have had many disputes on human rights, democracy, and freedom of public opinion. This cannot be suddenly changed upon finding a similar strategic objective…a U.S.-Vietnam partnership would be nothing like the partnerships the United States has with Japan, South Korea, and even the Philippines. It is likely to never be so.” In another Global Times piece, Li Haidong of China Foreign Affairs University wrote: “…the U.S. aircraft carrier's visit to Vietnam will hardly change Vietnam's cooperative policy toward China. Given the political mutual trust, economic collaboration, and regional integration, a third party will hardly impact the overall stable relationship between Beijing and Hanoi.”

China officially endorsed a similar piece by Li on China Military Online that stated: “Intensified U.S.-Vietnam military connection will be a normal phenomenon, but the closer military relation, as demonstrated by the U.S. aircraft carrier's visit to Vietnam, won't change the latter's cooperative policy toward China.”

Beijing may have a point. As fellow socialist countries with a shared worldview, Vietnam and China operate at the level of a “comprehensive strategic cooperative partnership”—the highest level of relations Vietnam maintains with any major power. Meanwhile, Vietnam's ties with the United States are at a lowly “comprehensive partnership” state. Thus, whenever Vietnamese and American leaders meet again, coronavirus-permitting, they may want to consider raising relations to that of a “strategic partnership,” which would signal that Hanoi and Washington share mutual long-term strategic interests against China. Vietnam floated the idea in 2011, and it was rumored that Vietnamese General Secretary and President Nguyen Phu Trong had been considering the step prior to his planned White House visit last year (unfortunately he fell ill and the visit never happened). Doing so would go a long way toward convincing China to take U.S.-Vietnam security ties seriously.

Beyond forging a “strategic partnership” with the U.S., Vietnam will also probably have to loosen restrictions inherent in its “Three Nos” defense policy to adequately deter China.

Beyond forging a “strategic partnership,” Vietnam will also probably have to loosen restrictions inherent in its “Three Nos” defense policy—no alliances, no foreign bases on its territory, and no working with a second country against a third—to adequately deter China. Vietnamese interlocutors have told me that Hanoi's Three No's is a self-imposed redline to signal to Beijing that China-Vietnam relations are prioritized over the United States and others. Fortunately, this appears to be changing as evidenced by Vietnam's latest Defense White Paper published (PDF) in November. The paper states that “depending on the circumstances and specific conditions, Vietnam will consider developing necessary, appropriate defense and military relations with other countries,” suggesting that if Vietnam's external security environment deteriorates, then it reserves the right to bend or break the Three No's. Beijing's ramped up bullying in the South China Sea may eventually prompt a major shift in Vietnamese policy.

If Hanoi indeed decides to “struggle” more against Chinese regional assertiveness in the future, then it will be imperative to find ways to reinforce U.S.-Vietnam deterrence messages inherent in events like the USS Theodore Roosevelt visit. Either way, Vietnam has a willing and able partner in the United States that seeks to prevent China from dominating and potentially destabilizing the Indo-Pacific.

Derek Grossman is a senior defense analyst at the nonprofit, nonpartisan RAND Corporation, regular contributor to The Diplomat, and adjunct professor at the University of Southern California. He formerly served as the daily intelligence briefer to the assistant secretary of defense for Asian and Pacific security affairs at the Pentagon.

This commentary originally appeared on The Diplomat on March 19, 2020. Commentary gives RAND researchers a platform to convey insights based on their professional expertise and often on their peer-reviewed research and analysis.