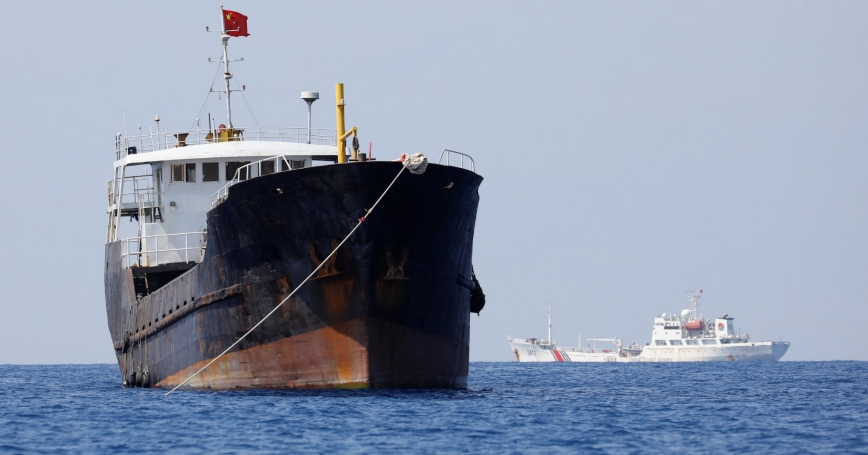 A Chinese flag flutters on a fishing boat while a China Coast Guard patrols at the disputed Scarborough Shoal, April 5, 2017

by Derek Grossman and Logan Ma

China's armed fishing militia—officially called the People's Armed Forces Maritime Militia (PAFMM) by the U.S. Department of Defense—plays an instrumental role in Beijing's strategy to enforce its sovereignty claims in the South China Sea and East China Sea. PAFMM is a government-supported armed fishing force of unknown strength that resides under the direct command and control of the People's Liberation Army (PLA). It has existed for decades and augments Chinese Coast Guard (CCG) and PLA Navy (PLAN) operations in the region.

PAFMM plays a particularly important role in establishing a de facto Chinese operating presence in disputed areas—in effect, changing the facts on the ground, or at sea, as it were—to challenge counter-claimants' ability to maintain control over disputed features. These classic “gray zone” operations are designed to “win without fighting” by overwhelming the adversary with swarms of fishing vessels usually bolstered from the rear together with CCG, and possibly PLAN ships, depending on the contingency, in escalatory concentric rings.

But the very existence of maritime militia in China is highly unique, given that the only other country that has one for sovereignty disputes is neighboring Vietnam. Indeed, Hanoi officially created its own maritime militia force in 2009 for the singular purpose of competing directly with PAFMM in an ongoing “people's war at sea.”[1] It is therefore worth asking: why did Beijing create a maritime militia to begin with and how has PAFMM evolved over time? What does this history suggest about its future?

Following the end of the Chinese civil war and the founding of the People's Republic of China (PRC) in 1949, the Chinese Communist Party (CCP) leadership, under paramount leader Mao Zedong, sought to defend the PRC coastline from Nationalist forces that had retreated to Taiwan and other smaller islands off the coast. Nationalist incursions into PRC coastal waters posed an acute challenge as the CCP possessed weak naval capabilities at that time. Thus, PRC leaders viewed the establishment of an organized maritime militia to combat this threat as an easy and quick fix to a legitimate problem. In fact, China possessed (PDF) a maritime militia prior to the CCP's rise to power, but the CCP provided state funds and training to transform disparate, local forces into a national-level coherent force charged with protecting the new regime.

Evidence of the CCP's role on local forces appears in the early 1950s, when the Bureau of Aquatic Products [水产部] played a critical role in organizing the maritime militia. The Bureau initiated collectivization of local fisheries and delineated large fishing areas. It also dictated catch targets and formulated fishing policy. The presence of former PLAN officers in the Bureau likely indicated close military involvement in militia activities. For example, Rear Admiral Yuan Yelie, identified as Vice Commander of the PLAN Headquarters in 1957, had assumed the position of Vice Minister of the Bureau of Aquatic Products by May 1960. PLAN-level training further enabled maritime militiamen to carry out defensive operations against Nationalist forces intent on harassing local PRC shipping. Indeed, Nationalist forces had already employed irregular warfare in the form of guerrilla forces at sea, reinforcing the PRC's need to do likewise.

There are at least two other explanations for the rise of China's maritime militia: collectivization and the influence of Soviet naval doctrine.

First, as part of the PRC's adoption of Marxist-Leninism, Mao sought to force collectivization across Chinese society. Traditional coastal communities were in disarray following the Chinese civil war, and once the CCP came to power, it rapidly collectivized these areas. For example, in Shandong, “by April 1956, the CCP had established 786 fishing collectives involving nearly seventy-six thousand households, which represented nine-tenths of Shandong fishermen.” Beijing probably believed collectivization of coastal fisheries was necessary to rebuild them after the war.

A second explanation for the existence of Beijing's maritime militia stems from the PRC's relationship with the Soviet Union in formulating its early naval strategy. In the 1920s, the newly formed Soviet Union gave rise to a strand of naval thought called the “Young School.” Its adherents essentially argued that their country, as a land-centric power, should focus the overwhelming majority of its resources on defending the coastline instead of the Old School's emphasis, from the days of Tsarist Russia, on naval modernization to project power out to sea.[2] This was to prevent Moscow from overspending on a domain in which Western powers already held a significant advantage.

Ultimately, the Young School emerged victorious and led Moscow to design forces that could protect (PDF) the army's seaward flank through the rapid procurement of smaller crafts and submarines to target the adversary's conventional assets.[3] The focus would be on irregular warfare spearheaded by coastal submarines, torpedo boats, and patrol crafts, further enabled by naval aviation assets. Young School had a major impact on the CCP, which eventually adopted the naval strategy for the newly emerging PRC. For example, PLAN commander Xiao Jingguang studied in Moscow in the 1920s and learned Young School theories. To be sure, it made sense for the Chinese to adopt Young School since the PRC faced identical challenges to those of the Soviet Union: the cost of deep ocean combatants was simply too steep, and Beijing was also preoccupied with events on land.

Later, by 1965, state-run media started discussing an official maritime militia supported by the PLAN. Around the same time, the PLAN established militia schools near its three fleet headquarters in Qingdao, Shanghai, and Guangzhou. These schools taught courses in navigation, weapons, engineering, and communications. The PLAN also issued reports describing the success of their battles, patrols, and training—all in line with carrying out Mao's “People's War” doctrine. Through the first half of the 1970s, the press portrayed the PLAN as a coastal force that never ventured more than 200 miles from the coast line. Instead, the common theme was PLAN supporting the maritime militia.

What began as a coastal patrol and surveillance force eventually evolved into a maritime sovereignty support force by the 1970s. The PRC's “little blue men” increasingly acquired the roles of maritime rescue, combat operations, anti-smuggling, and, ultimately, sovereignty enforcement.

Regarding Chinese sovereignty enforcement operations, early PAFMM forces demonstrated their significant contributions to island seizure campaigns starting in January 1974 with the Battle of the Paracel Islands against South Vietnam. In truth, Beijing did not have much of a PLAN to speak of in 1974, and perhaps the PAFMM was more capable of amphibious operations than the navy itself. Either way, the presence of Chinese fishing vessels around the Paracels slowed down South Vietnamese decisionmaking on the use of force against PAFMM as well as their response times to counter PLAN maneuvers. Additional time allowed Beijing to coordinate more effectively. When two fishing trawlers delivered 500 PLA troops to the Western Paracels, it resulted in the immediate surrender of the South Vietnamese soldiers defending the disputed features.

A key lesson learned for Beijing was that leveraging fishing militia forces was far less likely to trigger U.S. intervention in the matter even when the threatened neighbor was a U.S. ally. It is fair to say that this was the genesis of Beijing's strategy to routinely employ irregular forces in gray zone operations in the East China Sea and South China Sea. PAFMM's debut on the world stage was a resounding success, elevating the narrative that fishing militia forces were essential to the success of China's maritime strategy in the South China Sea. Following the Battle of the Paracel Islands in 1974, the PAFMM has been observed in nearly every major PLAN and CCG operation to harass maritime counter-claimants at disputed features or to seize the features from them.

Andrew S. Erickson and Conor M. Kennedy have carefully catalogued PAFMM activities in support of the CCG and PLAN since 1974.[4] Among these incidents, the PAFMM in 1978 engaged in swarming operations at the Senkaku/Diaoyu Islands in the East China Sea, disputed with Japan, and since 2016 the militia ramped up their presence there. Erickson and Kennedy note the proliferation of incidents in the South China Sea since the Battle of the Paracels, to include PRC seizure of Mischief Reef and Scarborough Shoal from the Philippines in 1995 and 2012 respectively. Beijing also attempted to blockade Manila's resupply mission of Second Thomas Shoal in 2014, and since 2017, has harassed Filipino fishermen at Sandy Cay and nearby Thitu (Pagasa) Island. PAFMM has also routinely bothered Vietnamese vessels, and in May 2014 helped enforce Beijing's emplacement of the Haiyang Shiyou-981 oil rig in disputed waters by ramming Vietnamese fishing and coast guard vessels. Separately, Beijing appears confident that PAFMM harassment of the U.S. naval ships is below the threshold of a forceful and escalatory response. It has consequently employed fishing militia against the USNS Impeccable in 2009 as well as the Howard O. Lorenzen in 2014.

PAFMM has evolved from being a small and near seas force to a robust and critical element of China's national maritime strategy. The fact that PAFMM has not only survived, but thrived, during the PRC's naval modernization beginning in the 1980s, implies that further modernization prioritizing increasingly advanced systems will not necessarily reduce PAFMM's value over time. Actually, the opposite seems to be the case—that is, PAFMM's role will likely grow in parallel with the PLAN and CCG to better support their operations. PAFMM's humble origins as a product of collectivization and the Soviet “Young School” also suggest that if China experiences slowing military modernization due to economic or other circumstances, Beijing could instead rely more heavily upon PAFMM as a cheaper and lower technology alternative to sovereignty disputes and coastal defense. If history is a good indication of what to expect in the future, then Beijing is likely to double down on the PAFMM in virtually any scenario imaginable. That means it should be a force to be reckoned in the years to come.

Derek Grossman is a senior defense analyst at the nonprofit, nonpartisan RAND Corporation, adjunct professor at the University of Southern California, and regular contributor to The Diplomat. He formerly served as the daily intelligence briefer to the assistant secretary of defense for Asian and Pacific security affairs at the Pentagon. Logan Ma is an adjunct research assistant at RAND. He is currently a master's student at the Johns Hopkins School of Advanced International Studies.

This article was first published at Maritime Issues. It is republished with kind permission.