State Police Powers: A Less Than Optimal Remedy for the COVID-19 Disease 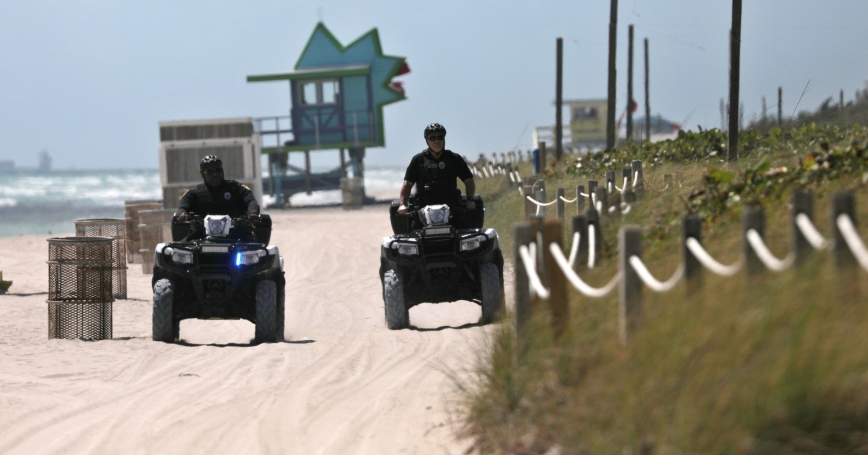 Police officers patrol the beach after the closing of all the beaches in Miami-Dade County due to COVID-19, in Miami Beach, Florida, March 19, 2020

As the country continues to grapple with the COVID-19 pandemic, Americans are experiencing—for the first time in the nation's history—an extraordinary and unprecedented exercise of government power affecting over 90 percent of the population: quarantines, stay-at-home-orders, and prohibitions on many businesses and most gatherings.

These restrictions infringe on fundamental constitutional rights and liberties, such as those associated with freedom of movement, association, worship, and economic activity. And yet, these government powers, referred to generally as state police powers, are inherent in our legal system and are as constitutionally valid as the Bill of Rights.

Police powers are the powers of a state government to make and enforce all laws necessary to preserve public health, safety, and general welfare. They originate from the English common law system that colonists brought with them to America. When the Constitution was ratified in 1788, the states did not surrender their powers as a condition of entering into the union.

The Constitution only limits police powers when states exercise them in a manner that is unreasonable, arbitrary, or oppressive to rights and liberties protected by the Constitution itself. For example, a state may not authorize its law enforcement officers to go door to door to search homes or persons within the state without a warrant simply because it wishes to reduce crime rates. Nor may a state pass a law banning nighttime driving simply to reduce crash-related deaths or injuries.

Courts have consistently upheld the constitutionality of states' powers to quarantine individuals against their will for public health purposes.

However, courts have consistently upheld the constitutionality of states' powers to quarantine and vaccinate individuals against their will for public health purposes, enforce curfews or other lockdown measures during emergencies, seize property without a warrant if exigent circumstances exist, and even declare martial law if necessary to maintain public order.

Aside from a series of isolated protests, few Americans question the need to continue to enforce coronavirus-related restrictions where the science doesn't support an easing. The risk to public health, and particularly this risk to elderly and minority populations, is too great. Nonetheless, however legal and necessary they are, given the threat of the coronavirus, it has also become clear to Americans that the exercise of police powers en masse is both a blunt and draconian mechanism for dealing with national level threats.

In this case, using the mechanism may have changed lives permanently in many ways. Aside from the cost to individual rights and liberties, the economic cost of such measures has been staggering thus far: an increase in the deficit of about $2.6 trillion and a real unemployment rate of just over 20 percent. Perhaps even more concerning, these economic costs tend to impact marginalized and disadvantaged groups and populations who are the least likely to be able to absorb and withstand their ill effects.

Such disparate impact by age, race, nationality, or class is another direct threat to constitutional values, as well as the health and stability of the democracy. This begs a number of critical questions: How can the United States face what may be a growing threat of pandemics, or other national threats, without having to exercise powers so extraordinary that they not only restrict fundamental rights and liberties, but also damage or jeopardize the economic livelihood of so many?

Can the United States afford to employ the same scope of police powers to fight future pandemics given their extraordinary costs? Are there less restrictive and cheaper approaches that don't have such crushing effects on society? In the case of public health and pandemics, one approach to mitigate against the future need to exercise police powers nationally may be to make substantial investments in health care and biotechnology infrastructure.

Research indicates that the effects of pandemics can be substantially reduced, and even isolated or localized to small areas, if governments invest in the required infrastructure. These investments could focus on equipment, personnel, and training that would enhance the following capacities: disease surveillance and detection; widespread availability of basic health care; contact tracing; rapid diagnostic testing for pathogen identification and treatment; and a robust, global risk communication system.

Additionally, the ability to quickly surge personnel, PPE equipment, medical space, and intervention therapies could also help. All of the above would require a significant financial investment. However, such an investment may very well minimize, insure against, or even negate the need of states to exercise their police powers—which can be their most blunt, ham-fisted, and draconian of authorities—to preserve Americans' health and safety at such a profound expense.

It may be an instance where, although billions are spent, it results in the savings of trillions, the preservation of our fundamental constitutional rights and liberties and most importantly, the saving of tens (or hundreds) of thousands of lives.

Douglas Ligor is a senior behavioral/social scientist at the nonprofit, nonpartisan RAND Corporation. Formerly, he served as deputy chief of the Northeast Law Division for the Office of the Chief Counsel, U.S. Citizenship and Immigration Services, Department of Homeland Security. He has also served as a trial attorney for Immigration and Customs Enforcement and the Department of Justice, Immigration and Naturalization Service.