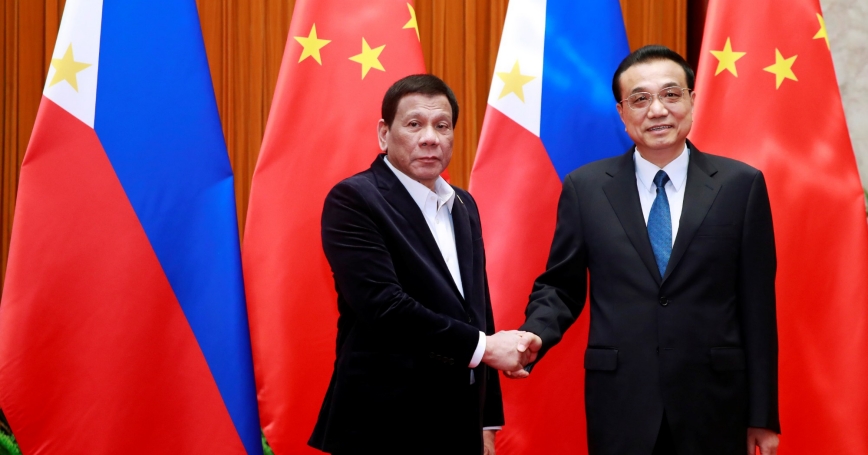 Photo by How Hwee Young/Pool/Reuters

On Feb. 11, Philippine President Rodrigo Duterte announced that Manila would be terminating the U.S.-Philippines Visiting Forces Agreement (VFA)—an agreement authorizing, among other things, the U.S. military to have freedom of movement into and within the Philippines. Duterte's decision was met in Washington with deep concerns about the potential fallout for the Indo-Pacific strategy (PDF), largely aimed at countering China's growing assertiveness.

They were right to be worried. After all, bases across the Philippines—namely Subic Bay Naval Base, Basa Air Base, Fort Magsaysay, Antonio Bautista Air Base, Mactan-Benito Ebuen Air Base, and Lumbia Air Base—are ideally located for U.S. purposes. They're near or on the South China Sea, significantly enhancing the U.S. military's ability to challenge Beijing there. Without them, Washington would have to rely more heavily on other, more distant bases in Guam; Okinawa; mainland Japan; Darwin, Australia; Hawaii; and elsewhere. Doing so would likely reduce the ability of the U.S. military to react to challenges, including threats to the Philippines itself, effectively hollowing out the two countries' Mutual Defense Treaty (MDT) and severely complicating the Enhanced Defense Cooperation Agreement, under which the U.S. military is authorized to preposition weapons and equipment at bases in the Philippines. Losing the VFA would probably also weaken other allies and partners' perceptions of Washington's security commitments in the region.

But there is a glimmer of hope in Duterte's announcement: Per the agreement, official VFA cancellation does not take effect for 180 days, meaning Washington and Manila have until Aug. 9 to save it or negotiate a new VFA to avert any further alliance crisis. The challenge is that Duterte is an extremely anti-U.S. president who may seek to eliminate the MDT in its entirety in favor of greater self-reliance and better relations with China and Russia. Yet success would speak volumes about the durability of the alliance in spite of the whims of an autocratic president.

While Duterte's stance is likely to come out on top given his position as chief executive of the country, there are subtle signs that the VFA's demise is not a predetermined outcome. For example, shortly after Duterte's termination announcement, the Philippine ambassador to the United States, Jose Manuel Romualdez, noted at a forum in Manila that both countries were exploring “ways and means to see how we can come up with something similar.”

Although Duterte in 2016 threatened to kick U.S. forces out, he also clearly benefits from U.S. military assistance in counterterrorism operations.

Meanwhile, in a very cryptic tweet from Philippine Foreign Secretary Teddy Locsin Jr. the same day as the announcement, Locsin said: “As a diplomatic courtesy there will be no further factual announcements following this self-explanatory development.” After Joshua Melvin of Agence France-Presse retweeted Locsin's remarks with the comment “Now the furious negotiations begin. 180 day countdown #VFA,” Locsin retweeted him with “You're the only one who got that,” suggesting that negotiations were about to begin or already underway. If the two sides are indeed negotiating, it is unknown what each country seeks for the future.

Aside from this reading of the tea leaves, Duterte may not fundamentally possess sole discretion in deciding the VFA's fate. Bipartisan senior leaders in the Philippine Senate, notably led the Senate president, a Duterte ally, filed a petition requesting the Supreme Court review whether Duterte has the unilateral power to terminate the agreement. The petition calls for the executive and legislative branches to reach concurrence on such a decision. Regardless of the court ruling, presidential spokesman Salvador Panelo said, “We will follow the Supreme Court. Whatever the law says, we will follow.” The Supreme Court, however, tends to favor Duterte.

Members of Duterte's own cabinet also appear to have serious misgivings about his VFA decision. They have tried to delicately discuss their concerns with him but understand they are unlikely to change his mind. To make their views more palatable to Duterte, they likely sought to highlight the importance of the VFA in maintaining U.S. special forces support to counterterrorism operations in the southern Philippines against jihadis.

Although Duterte in 2016 threatened to kick U.S. forces out, he also clearly benefits from U.S. military assistance in these operations as well—and Manila may need more assistance as 11 of its soldiers were just killed battling the Abu Sayyaf terrorist group in Sulu. The VFA was also essential in allowing the U.S. military to enter the Philippines in 2013 to provide humanitarian assistance and disaster relief following Typhoon Haiyan. U.S. security assistance over the past two decades of VFA existence has been substantial, tallying approximately $1.3 billion, and annual exercises like Balikatan—though canceled this year due to the coronavirus pandemic—significantly enhance the readiness of the Philippine military to conduct a range of missions. Indeed, decades of close interaction between the U.S. and Philippine militaries have resulted in highly favorable views of the United States among the Philippine defense establishment, whereas China is assessed as the top threat.

China's behavior in the coming months could also push Duterte to reconsider. Beijing recently declared the establishment of new administrative districts on disputed features in the Paracel and Spratly islands. Manila in mid-March quietly reaffirmed its favorable Permanent Court of Arbitration ruling to the United Nations, and voices are growing only louder to stay the course. It is more likely, however, that Duterte will continue to value Chinese support—for example, he recently thanked Beijing for coronavirus assistance—and willfully ignore challenges in the bilateral relationship. Duterte's strategy may reach a breaking point as polls consistently show (PDF) strong support among Filipinos for alignment with the United States over China.

Paradoxically, the death knell for the VFA might come from Washington itself instead of Manila. When asked his thoughts on Duterte's notice of termination of the agreement, Trump replied, “I don't really mind if they would like to do that. It will save a lot of money. … My views are different than others.” Trump's statement highlights his general lack of appreciation for international agreements and alliances in favor of his “America First” policy. The two leaders did, however, speak on April 19, and it was unclear if the VFA came up. Regardless of what happens, the fate of the VFA will set the tone of the alliance at least for the remainder of Duterte's tenure out to 2022, if not beyond.

This commentary originally appeared on Foreign Policy on May 1, 2020. Commentary gives RAND researchers a platform to convey insights based on their professional expertise and often on their peer-reviewed research and analysis.