The Dangers of Designating Antifa as a Terrorist Organization Now 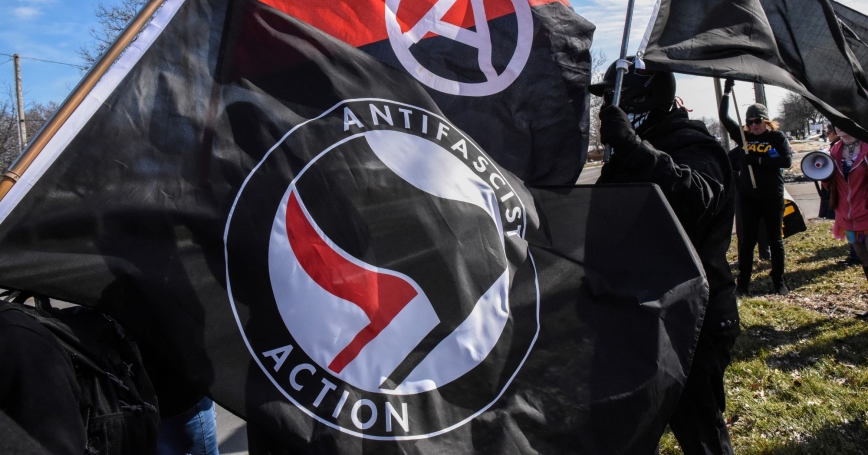 Members of the Great Lakes anti-fascist organization (Antifa) fly flags during a protest against the Alt-right outside a hotel in Warren, Michigan, March 4, 2018

Recently, President Trump said that the United States would designate Antifa as a terrorist organization. It remains to be seen whether he will carry through with this statement, as he has often stepped back from policy initiatives announced via Twitter, but there could be unintended consequences of doing so prematurely. It is not clear what role Antifa has played in recent protests and how that provides a transparent rationale for why it should be designated as a terrorist organization. Such an action could also raise further questions about the definitional value and apolitical nature of the U.S. terrorist organization list. Using recent demonstrations as the impetus for such a designation could further fuel extremist violence and undermine the U.S. legal framework for counterterrorism investigations.

Extremists of all stripes feed off conspiracy theories, and events over the last few days have all the makings of a good one. Unanswered questions abound about the death of George Floyd and the resulting protests and riots. In Minnesota and Pittsburgh, questions have been raised about whether protests were hijacked by organized groups who instigated violence to escalate events. However, multiple theories have been put forth as to who—including whether both far-right and far-left extremists—are involved.

The video depicting Floyd's death suggests a particularly egregious use of force, with little ambiguity about whether police had alternative choices in their response. Tensions are on edge with coronavirus lockdowns, and the pandemic has disproportionally affected African American communities both in loss of life and economic effect. As learned in the Arab Spring and Tunisia, sometimes a simple spark will prove to be the critical one. All of these factors could explain why we have seen a more intense response in the last few days than in the past. But at the same time, it is not conspiratorial to wonder why rioting and looting have been so severe compared to the all too frequent previous incidents of police brutality captured on video, especially when there have already been indications that white supremacist groups are using coronavirus to recruit, sow distrust in government, and directly harm those they hate.

Thankfully, the Justice Department has stated that the FBI will investigate whether there was an organized effort to push protestors into violence. Such an effort will be critical both to determine the truth about what has happened and to identify whether any domestic violent extremist groups have the organization and resources to have coordinated an effort in multiple cities around the country.

Also critical is the need to wait until facts have been established that indicate changes to policy. Conspiracy theories can thrive in an environment where truth is murky or simply unknown. The more facts that can be established about events, the more difficult it may be for alternative explanations that serve the interest of extreme groups. In particular, designating Antifa without the facts could cultivate a conspiracy theory that Antifa was “set up” by white supremacist groups in league with the government. This plays into a dangerous narrative that could both be leveraged by left-wing extremists to garner recruits and which could fuel further violence.

Antifa's designation could raise broader questions about U.S. counterterrorism laws. The United States has no list of domestic terrorist organizations, only a Foreign Terrorist Organizations (FTO) list. Antifa does not clearly meet the definition of the F, the T, or the O—it is primarily domestic, it is unclear whether their acts of violence rise to crimes of terrorism, and it is a loosely oriented movement.

None of these issues are necessarily prohibitive in designating it as an FTO. Groups like Antifa clearly more closely meet the definition of domestic terrorism, but the only requirement for being considered “foreign” terrorism would be to have some means that transcends national boundaries. Antifa protestors have been active in the UK and elsewhere, and even its name—anti-fascist—suggests an international orientation against the roots of white supremacy groups in past Fascist governments in Germany, Austria, and Italy. This would likely be a sufficient transnational angle to designate Antifa, given there is no clear standard.

Designating Antifa would set a precedent that could bring major changes to how counterterrorism laws are used, with uncertainties about whether those better serve national security.

Similarly, there is no requirement for how structured or codified an organization must be for designation. Counterterrorism laws have been used against Americans even when they have had no direct ties to FTOs, for example when simply acting consistently with the ideology of an FTO. So it is not unreasonable to think that Antifa could be both designated, and used as the justification for prosecutions, even if it has no card-carrying members.

The current FTO list generally focuses on jihadist terrorist groups, and whether it should be expanded to be more inclusive of other extreme groups has been seriously debated for the last few years. The Trump administration for the first time designated a white supremacist group in April, but it was also clearly a foreign group. Designating a largely domestic organization as an FTO would likely invite legal challenge. The U.S. legal counterterrorism framework is fragile, and it has been successfully challenged before. It may have been challenged harder and earlier had the affected U.S. population been larger and more influential.

Terrorism laws give intelligence and law enforcement authorities access to a suite of surveillance tools they would not have otherwise. They also make certain actions that would otherwise be protected speech or assembly illegal; doing so could have significant short- and long-term political implications that we do not understand. This alone would justify concerns about their potential for abuse.

There are hard questions about how terrorist laws should be structured, ones we frankly aren't well positioned to answer. More objective analysis and a robust political debate could help people to understand the trade-offs between creating a domestic terrorism statute, expanding the use of the foreign terrorism statue, and moving away from terrorism laws altogether. Designating Antifa may be intended to be a discrete act, but the precedent it would set could bring major strategic changes to how the United States uses counterterrorism laws, with uncertainties about whether those changes better serve national security.

Heather Williams is a senior policy researcher at the nonprofit, nonpartisan RAND Corporation, as well as associate director of the Strategy, Policy, and Operations Program (SPOP) within the Homeland Security Operational Analysis Center (HSOAC).

This commentary originally appeared on RealClearPolicy on June 22, 2020. Commentary gives RAND researchers a platform to convey insights based on their professional expertise and often on their peer-reviewed research and analysis.