The Racial Disparity in Unemployment Benefits 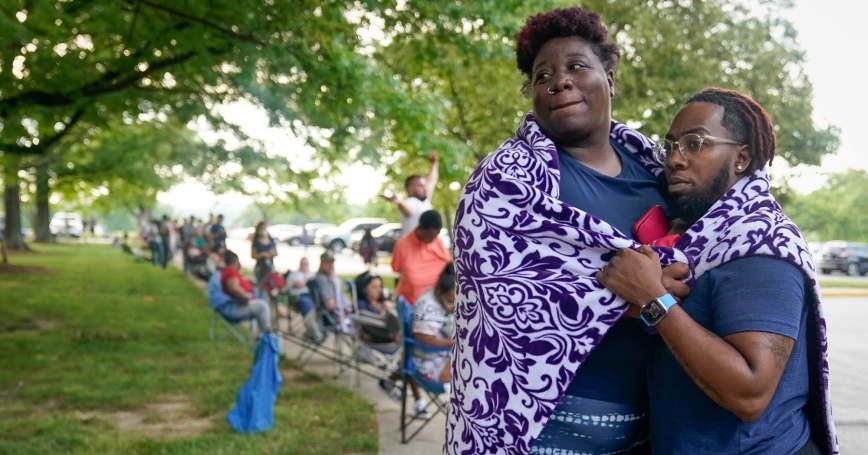 Whitney Maddox and DeShaun Bradford stand in line with hundreds of others outside a career center in Frankfort, Kentucky, hoping for assistance with their unemployment claim, June 18, 2020

Imagine that two individuals worked the same number of years and were paid the exact same salary—and yet in retirement one receives twice as much from Social Security than the other. Such a disparity would be shocking among retirees.

With unemployment benefits, that is precisely what happens.

Go a step further. Imagine two levels of benefits—one for white workers and one for Black workers. This would be even more shocking, but is, in effect, what happens.

Unemployment insurance—as 40 million Americans have started to discover during the pandemic shutdowns—is not a single public program, but a set of 53 distinct programs. Each state (plus the District of Columbia, Puerto Rico, and the Virgin Islands) has its own method for defining a worker's past earnings, its own formula for determining how much of that income will be replaced by unemployment insurance, and its own cap on benefits.

It's the federal government's intention that at the end of all those calculations states replace about half of a worker's lost wages. So a worker earning $50,000 a year, at 50 percent replacement, should get $481 per week. This is no problem in Massachusetts, the most generous state, where benefits are capped at $823. But in Mississippi, the least generous state, the cap is $235. Instead of getting 50 percent replacement, that worker would get 24 percent.

This drastic state variation is where the difference between the Black and white benefit comes from. The Black population in the United States—and by extension, the Black labor force—is not evenly distributed across the country. Six states have a near-zero percentage of the country's Black workforce: Maine, South Dakota, Idaho, Vermont, Wyoming, and Montana. Another dozen states have fewer than 0.5 percent each. On the other hand, one in four Black workers lives in just three states: Texas (8.5 percent), Florida (8.1 percent), and Georgia (8.0 percent).

Black workers are less financially supported in unemployment than white workers simply by virtue of where they live.

The problem is that, overall, the states with more Black workers have less generous unemployment benefits. So when we look at this picture on a national level, Black workers are less financially supported in unemployment than white workers simply by virtue of where they live. To be clear, all workers in these low-generosity states are ill-served, whether they are Black or white, but these states are home to a high share of Black workers.

To demonstrate this, I calculated the average maximum unemployment benefit separately for all white and Black workers in the United States weighted by where they live. (I based state weights on five-year labor force estimates from the American Community Survey, covering 2013–2018.) So in determining the Black worker average, states like Vermont got zero weight while states like Texas were more weighted.

Those calculations show that white workers have an average maximum unemployment benefit of $463 and Black workers $423, a difference of $40.

Maybe $40 does not sound like much, but over 26 weeks of benefits, it adds up to $1,040. That's nearly the size of the stimulus checks ($1,200) sent out as part of the CARES Act. It's also the size of about two car payments, a month's median rent in 13 states, or annual household water bills.

It's also important to note that these calculations represent the maximum potential benefit, not what workers actually receive. Previous (PDF) research (PDF) has shown that Black workers are less likely than white workers to receive unemployment at all, a difference that cannot be explained by education or prior job tenure.

That Black workers live in less generous states is not an accident of modern policymaking. The reason unemployment is administered by states at all—unlike Social Security, which is federally operated—dates back to the New Deal in the 1930s.

There were two things going on. A handful of states already had created unemployment programs and did not want a federal program. At the same time, passing the New Deal legislation required a bargain between Northern and Southern Democrats. The former wanted to expand worker support, and the latter wanted to make sure Black workers in the South did not benefit from that support. Keeping relief programs under state control helped both groups accomplish their aims.

Today's unemployed inherited this system of state policies with racial implications that persist. Southern states today have not only the lowest benefits, they also have the lowest recipiency rates among Black workers. The CARES Act has papered over these troubling inequities by boosting benefits by $600 a week and expanding eligibility, but that add-on ends in July. Soon the miserliness and racial disparity of benefits will become more stark.