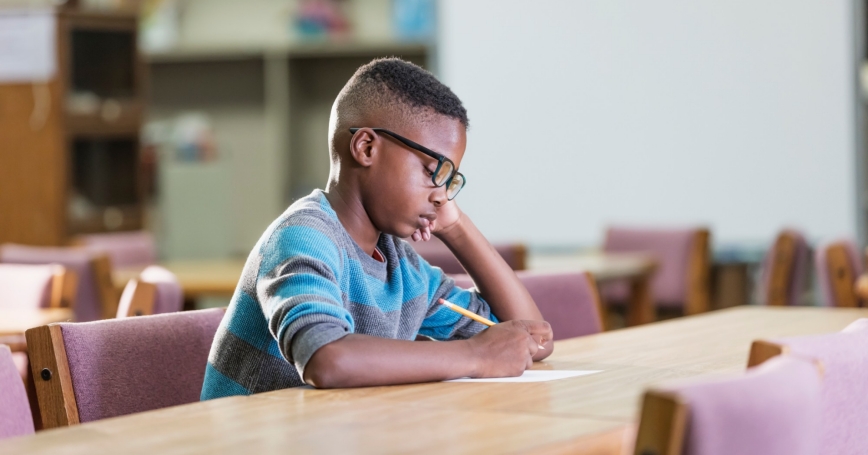 The story of a fifteen-year-old Black girl in Michigan has been making national headlines. The young girl, who was diagnosed with attention deficit hyperactivity disorder (ADHD) and receives special education services, was remanded to a juvenile justice facility in May—despite the COVID-19 pandemic—for violating her parole. The violation: missing a few days of homework. After spending her sophomore summer in a juvenile detention facility, the Michigan Court of Appeals ordered the girl's release on July 31st following public outcry and pressure from notable figures including Hilary Clinton.

Though the circumstances of this case sound extreme, the underlying reality of Black children's involvement in the juvenile justice system is not exaggerated. In Oakland County, Michigan, the jurisdiction of this case, 42 percent of the kids in juvenile detention are Black, compared to only 15 percent of the overall youth population in the county. This trend reflects the fact that Black individuals are disproportionately involved in the justice system nationwide, beginning in childhood. At age 13, Black children are detained in juvenile placements at nearly 3.5 times the rate of white children. That ratio steadily increases to Black children being detained at over 4.5 times the rate of white children by age 17. This trend continues into early adulthood, and approximately 21 percent of Black men will serve a prison sentence by age 30, compared with only 2.5 percent of white men. As of 2016, 33 percent of people incarcerated in state and federal facilities were Black, though Black people only made up 13 percent of the U.S. population.

As discussed in a prior RAND blog post, Los Angeles County has shown an increased appetite for criminal justice reform in recent years, particularly diversion programs aimed at the mental health population. About 30 percent of Los Angeles's county jail population was in mental health housing units and/or prescribed psychotropic medications, and a recent study showed 61 percent of those individuals were appropriate candidates for diversion into community-based treatment programs. Though the study found no differences in appropriateness for diversion across racial and ethnic groups, racial equity is rarely placed at the center of jail reform research, and most diversion programs are agnostic to race. The focus of these programs is generally to reduce recidivism and financial burden, and the evidence shows those goals are largely met. But what is the impact on racial equity of these types of programs?

At age 13, Black children are detained in juvenile placements at nearly 3.5 times the rate of white children.

California Propositions 36 and 47 are good examples of a large-scale criminal justice reforms. Both efforts focus on addressing the nature of the offense an individual committed, but not explicitly on racial equity. Proposition 36 went into effect in July 2001 and mandated that individuals with less than three prior drug convictions and no violent convictions be offered drug treatment in lieu of incarceration. Proposition 47 went into effect in November 2014 and reduced certain drug and property charges from felony to misdemeanor offenses. Both Prop 36 and Prop 47 have been examined through an equity lens and, although there has been some small reduction in disparities between minority groups and white people, the population most widely recommended for diversion was consistently white. This was linked to differences in prior arrest records and convictions for felony offenses among Black people, and prosecutorial and judicial discretion. These results indicate programs agnostic to race may reduce disparities on the margins, but fall well short of solving the problem.

In part, this may be because inequities in justice system involvement begin before an individual reaches adulthood. One key factor is the “school-to-prison pipeline,” the mechanism through which students are pushed out of school and into contact with the justice system. Beginning in the 1990s, state and federal policies encouraged school administrators and school officers shift away from in-school disciplinary measures and instead involve police when responding to students' normal adolescent behavioral incidents. The result of this shift was the transformation of school disciplinary programs into the school-to-prison pipeline, and schools became the primary source of youth involvement with the justice system. This is often the path imposed on marginalized students, particularly Black boys, who are three times as likely to be suspended as white students. Once set on this path, students experience more frequent involvements with police, likely a longer arrest record, and expulsion or transfer to alternative education facilities that tend to lack the rigor of their prior schools. This phenomenon has also been shown to more frequently impact (PDF) individuals with disabilities, who experience poverty, and who have a history of trauma. These cases have also been correlated to increased rates of drug use later in life. In turn, these factors likely establish the base for the large mental health population we observe in Los Angeles County jails.

At least one youth diversion program has set out to specifically address disparities in student arrests, suspensions, and expulsions/disciplinary transfers. The Philadelphia Police School Diversion Program (SDP) is a model of collaborative partnerships designed to address problems upstream and disrupt the school-to-prison pipeline. Established in 2013, this program is focused on preventing the trauma and long-term consequences of arrest and juvenile justice involvement, while also providing access to social services for students in need. This change starts from the point of first police contact. If students are eligible for the program, they cannot be arrested and the PPD school officer must enroll them in the Diversion Program. The program is also an opportunity to identify prevention and intervention needs and refer students or families to social services. To mitigate racial and ethnic disparities, this program has created an objective referral process to avoid bias when determining youth eligibility. The program has substantially reduced school arrests and youths have much lower recidivism rates than the national average, showing that equity-focused programs effectively address justice system outcomes.

The outcomes of Propositions 36 and 47 demonstrate that we cannot expect reforms that are agnostic to race will fix disparity issues. Los Angeles is starting to think in this way—the Alternatives to Incarceration Workgroup (ATI) specifically used a racial equity lens in the development of its recommendations, but it is critical that the County continue to monitor this issue as it implements the ATI recommendations. This includes collection of the right data (e.g., data on service utilization, arrests, convictions, and outcomes by racial and ethnic groups), continuous and timely examination of these data, and ongoing efforts to address persistent inequities. Without ongoing attention and deliberate policies and programs, injustices are likely to persist.

Margaret Chamberlin is an assistant policy researcher at the nonprofit, nonpartisan RAND Corporation. Stephanie Brooks Holliday is a behavioral scientist at RAND.