What Does Vietnam Think About America's Indo-Pacific Strategy? 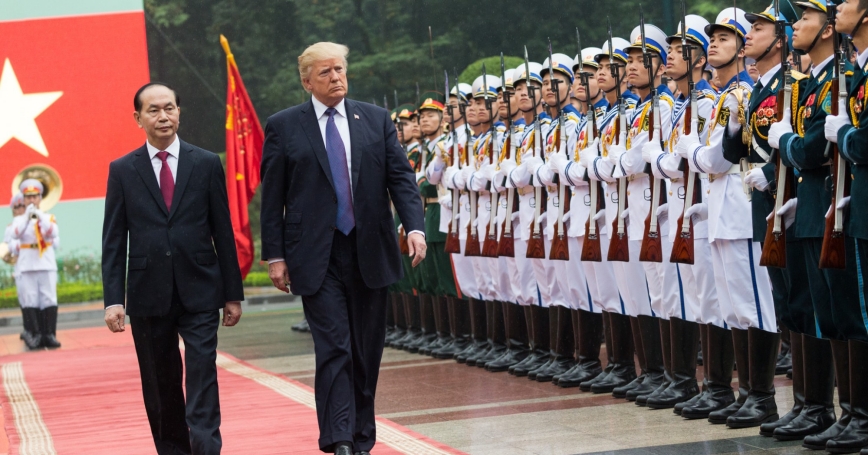 In its response, however, Vietnam's Ministry of Foreign Affairs (MoFA) withheld any mention of the United States by name. Instead, Hanoi noted that “Vietnam welcomes countries' positions on the East Sea [Vietnam's term for the South China Sea] issues which are consistent with international law and shares the view, as stated in the statement issued on the occasion of the 36th ASEAN Summit, that the UNCLOS [United Nations Convention on the Law of the Sea] sets out the legal framework within which all activities in the oceans and seas must be carried out.”

Keen observers of Vietnam's security policy, including myself, are not surprised in the least by this outcome. Since the Soviet Union abandoned its alliance with Vietnam to mend ties with China in 1986, Hanoi has been consistent over decades to avoid repeating the mistake of aligning with one great power against another. Within the context of rising U.S.-China competition, the same rule has applied. Complicating the matter further has been Vietnam's “Four Noes and One Depend” defense policy—no alliances, no foreign military bases on Vietnamese territory, no activities with a second country against a third, and no starting war (more on the “One Depend” below). Even though there may be some flexibility in the Four Noes policy, particularly on the third no if Chinese assertiveness in the South China Sea intensifies, Hanoi has typically taken a conservative approach to its interpretation to avoid unnecessarily antagonizing Beijing.

Hanoi is fundamentally unwilling to risk “cooperation” with Beijing by forging closer security ties to Washington.

While Vietnam's delicate balancing act is entirely predictable, it is nonetheless disappointing for Washington, and should temper American assessments of the extent to which Hanoi might be willing to play a role in the U.S. Indo-Pacific Strategy (PDF) to keep the region “free and open” from Chinese coercion. Recent Chinese assertiveness against Vietnam in the South China Sea, such as the Chinese coast guard's sinking of a Vietnamese fishing boat, Beijing's declaration of the establishment of administrative control over the disputed Paracel and Spratly Islands, and Chinese intrusions into Hanoi's EEZ, have likely forced Vietnamese leaders to review their “struggle” options against China. But, to date, Hanoi is fundamentally unwilling to risk “cooperation”—simultaneous “cooperation and struggle” is a hallmark of Vietnamese policy against friends and adversaries alike—with Beijing by forging closer security ties to Washington. Thus, the Trump administration's high hopes that Vietnam might robustly support the Indo-Pacific Strategy as a “like-minded” partner may be a bit premature.

Publicly, however, Hanoi has intimated that it supports the strategy. Most notably, the latest Vietnamese defense white paper (PDF), published in November 2019, reads: “Vietnam is ready to participate in security and defense cooperation mechanisms…including security and defense mechanisms in the Indo-Pacific region.” By using the specific term “Indo-Pacific,” Hanoi was likely making it known (to Beijing) that the U.S. Indo-Pacific Strategy is beneficial to Vietnam's national security interests. It is highly significant that such an authoritative paper brought up the Indo-Pacific, as words matter greatly in Vietnam. It seems as though the only other time this has happened was when then-President Tran Dai Quang visited India in March 2018. During that trip, Quang discussed the need to uphold freedom of navigation and overflight in the South China Sea, as well as peaceful and legal settlement of disputes. Quang further referred to desiring “a peaceful and prosperous Indo-Pacific region.”

Beyond use of the term Indo-Pacific, the stated goals of Vietnamese public statements are also very much in line with U.S. policy in the South China Sea. For example, Vietnam's MoFA routinely emphasizes the importance of abiding by UNCLOS to settle maritime sovereignty disputes, and in one instance in 2018, Hanoi hinted that it supported the Indo-Pacific Strategy when it said: “Vietnam welcomes initiatives and connecting efforts in the region that contribute to this goal.” Although Hanoi did not express appreciation to Washington for the latter's shift in South China Sea policy, the thrust of Vietnam's response—to support UNCLOS—mirrors the U.S. position.

And of course, deeds matter far more than words. From this perspective, U.S.-Vietnam cooperation in the security domain has serious momentum. Most recently, on July 22, the two nations inked an MOU on fisheries cooperation in the South China Sea, to include cooperation on enhancing Vietnamese law enforcement capabilities. Hanoi has not shied away from highly symbolic displays of U.S. defense support either. Over the last three years, Hanoi twice invited the United States to send aircraft carriers to make port visits at Da Nang. Additionally, last year, the commander of U.S. Indo-Pacific Command (INDOPACOM), Admiral Philip Davidson, visited Vietnam for the first time, as did Secretary of Defense Mark Esper to highlight the growing strength of U.S.-Vietnam security ties. Washington also invited Vietnam for the second time in a row to participate in this year's Rim of the Pacific (RIMPAC) exercises, and transferred one of two Hamilton—class coast guard cutters to build up Vietnam Coast Guard capabilities—and these are just some of the many areas of bilateral security cooperation and growth. With the China threat in the South China Sea only rising, there is no reason to believe these interactions will diminish any time soon.

Finally, it is important to note that Vietnamese and American interests align in other areas outside of the South China Sea that are still pertinent to the Indo-Pacific Strategy. For instance, Vietnam is highly suspicious of China's Belt and Road Initiative (BRI), and the Indo-Pacific Strategy seeks to counter Beijing's use of “predatory economics to coerce other nations.” Chinese damming activities along the Mekong River in neighboring Laos and Cambodia, which in many instances are fueled by the BRI, is a good case in point. Such behavior poses an existential challenge for Vietnam's Lower Mekong Delta as it is the breadbasket (rice, actually) and freshwater fishing hub of the country. Reduced water flow stemming from Chinese damming has contributed to devastating environmental impacts that Hanoi seeks to redress with support from the United States. Indeed, Washington has remained actively engaged through the Lower Mekong Initiative (LMI), with Pompeo in August 2019 noting while in Bangkok that “The river is at its lowest levels in a decade, a problem linked to China's decision to shut off water upstream.”

Washington should expect Vietnam to continue seeking balance between neighboring China, which has economic and military superiority over it, and the United States, which can help offset Chinese power.

But the South China Sea is where the rubber meets the road for U.S.-Vietnam security ties, and in this regard, Hanoi has gone as far as it is comfortable up to this point. Going forward, Washington should expect Vietnam to continue seeking balance between neighboring China, which has economic and military superiority over it, and the United States, which can help offset Chinese power. Importantly, Vietnam's latest defense white paper strongly suggests that closer U.S.-Vietnam cooperation is greatly premised on trend lines in Chinese behavior. It states: “depending on the circumstances and specific conditions [my emphasis added], Vietnam will consider developing necessary, appropriate defense and military relations with other countries.” This is the “One Depend” referenced earlier. In other words, so long as Chinese assertiveness continues to rise, then Hanoi will increasingly turn to Washington for assistance.

In this scenario, there is no need for the United States to worry about whether Vietnam is properly aligned with the Indo-Pacific Strategy or not. It is and will be, even if Hanoi does not officially vocalize its support. Hanoi could adopt other, less controversial means to express its pivot short of official endorsement of the strategy, such as elevating U.S.-Vietnam ties from a “comprehensive partnership” to “strategic partnership” (China is a “comprehensive strategic cooperative partner”—the highest designation given by Vietnam).

More worrisome for Washington is the possibility that Beijing makes the strategic calculation to reduce pressure on Hanoi in the South China Sea. Though highly unlikely, if the two nations were somehow to find a mutually-acceptable accommodation in the region, then they could reset bilateral ties to the detriment of America's efforts to counter Chinese coercion. That is why it is imperative for the United States and Vietnam to take a multifaceted approach to their relationship, including political, economic, and people-to-people ties, to ensure their ties remain in good health if China-Vietnam relations were to significantly improve.

This commentary originally appeared on The Diplomat on August 5, 2020. Commentary gives RAND researchers a platform to convey insights based on their professional expertise and often on their peer-reviewed research and analysis.